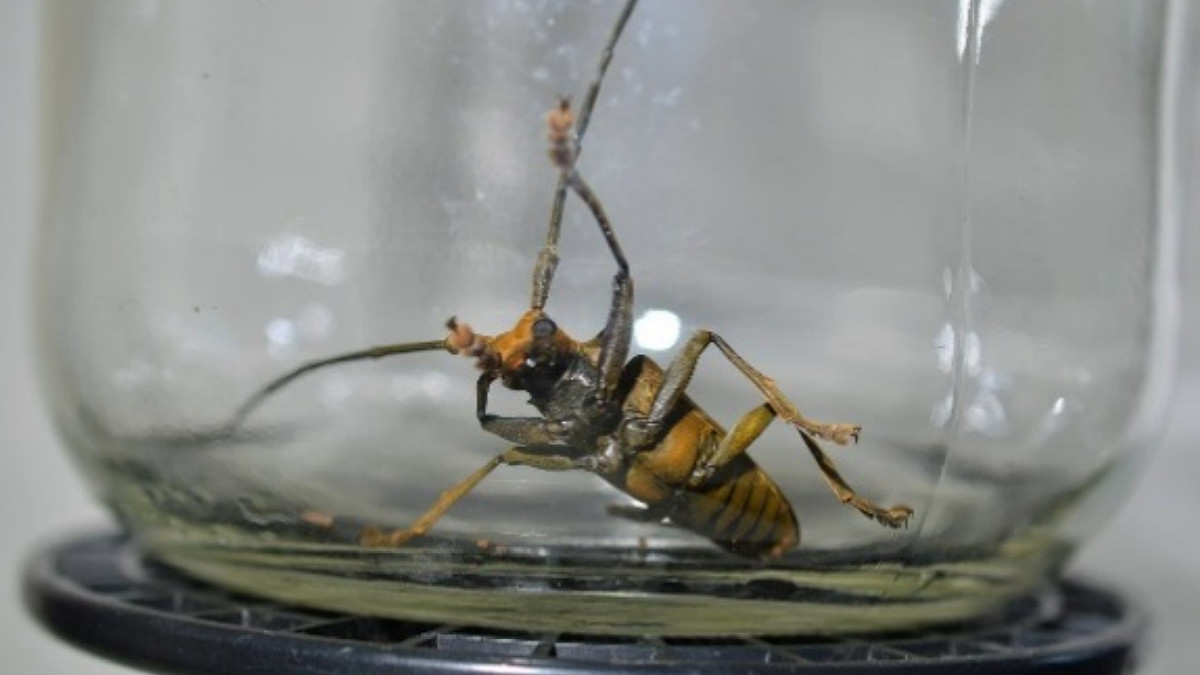 WASHINGTON - The U.S. Senator from Hawaiʻi is calling on the Secretaries of Agriculture and the Interior to take action in the effort to control and eradicate the pest.

(BIVN) – U.S Senator from Hawaiʻi Brian Schatz is calling on the federal government for immediate support to protect Hawaiʻi Island from the invasive longhorn beetle before it causes too much damage.

The beetle, A. aesthetica, burrows into the trunks of trees, ultimately killing them. It “poses a threat to Hawai‘i Island’s growing number of cacao farmers, and endangers culturally important plants such as the kukui and breadfruit trees,” Schatz says.

On Thursday, Senator Schatz called on Secretary of Agriculture Sonny Perdue and Secretary of the Interior David Bernhardt – two Trump cabinet officials who have visited the Big Island in recent months, coincidentally – to step in “in order to prevent harm to the U.S. economy and federally managed lands in Hawai‘i”. Here is the full letter written by Sen. Schatz:

I am writing to request your immediate intervention to manage, control, and eradicate a longhorn beetle species (Acalolepta aesthetica) native to Australia and first discovered in Hawai‘i in September 2013. Current assistance from the USDA’s Agricultural Research Service (ARS) at the Pacific Basin Agricultural Research Center (PBARC) has already made a difference for Hawai‘i Island residents and farmers, but further science support is needed from:

• the Institute for Pacific Island Forestry (IPIF) and the U.S. Forest Service (FS); and

In order to operationalize research findings, coordination and management from the following services within your departments will be critical:

Finally, please act within existing rules and regulations to give a full and expeditious review of the State of Hawai‘i’s application for funding from the USDA to address this emerging pest before it establishes and spreads further.

A. aesthetica arrived in Hawai‘i in September 2013, but its potential impacts to U.S. agriculture and Hawai‘i’s environment are only now becoming clear. Currently, A. aesthetica has been found from Puna to Hilo on Hawai‘i Island, but its range may be greater because the only confirmed attractant to trap the insect for detection and study is the use of lighting at night.

Although A. aesthetica is not a pest in its native Australia, in Hawai‘i, scientists from the Hawai‘i Department of Agriculture believes that the larval beetle poses a threat to trees of significant economic and cultural importance:

Based on observations in Hawai‘i, larvae of A. aesthetica can cause extensive damage to trees by burrowing through their trunks, resulting ultimately in the death and physical collapse of affected trees. Thus, the beetle poses a direct threat to the $3.85 billion/year citrus industry, Hawai‘i’s nascent cacao industry, and the kukui (the state tree) and breadfruit trees, which are revered in Hawai‘i for their importance to Native Hawaiians.

At present, there is an alarming dearth of scientific knowledge about A. aesthetica, which means that efforts to manage the past and prevent its spread in Hawai‘i and to the mainland United States are suboptimal. Priorities for research include:

• Understanding the basic biology and ecology with a focus on existing and potential hosts;

• Development of trapping and other monitoring tools;

• Pathways analysis to understand how the beetle spreads in order to prevent and control further establishment in Hawai‘i, and introduction to citrus producing states such as Florida and California;

• Forensic analysis of how the pest originally came to Hawai‘i to help prevent further introductions;

• Testing of chemical controls and the development of treatments to manage the pest;

• Exploration for natural predators in its native range and other steps towards biological control;

• Science-based advice for the State of Hawai‘i and the County of Hawai‘i on appropriate government-level responses to the pest; and

• Development and dissemination of best practices to farmers and individuals to help curb the spread of the pest.

With this scientific foundation, federal land managers should act in coordination with the state, county, and private landowners to implement the practices identified by researchers to contain, mitigate, and hopefully eradicate A. aesthetica. In particular, federal sites such as Hawai‘i Volcanoes National Park, Hawai‘i Experimental Tropical Forest, and the Hakalau National Wildlife Refuge should cooperate to control A. Aesthetica regardless of where it is found in Hawai‘i.

The threat to U.S. agriculture and Hawai‘i’s environment justifies immediate, strong intervention from the federal government in order to prevent harm to the U.S. economy and federally managed lands in Hawai‘i – especially while the threat of A. Aesthetica is still confined to a fairly limited area on Hawai‘i Island. Should it spread and establish across a wider U.S. geography, its impacts could be quite severe, particularly in Florida where Hawai‘i experts believe that the hot, humid climate could be conducive to its growth and colonization.