POHOIKI, Hawaiʻi - New life now inhabits the anchialine pools formed at Pohoiki, which was transformed by the 2018 eruption of Kīlauea Volcano. 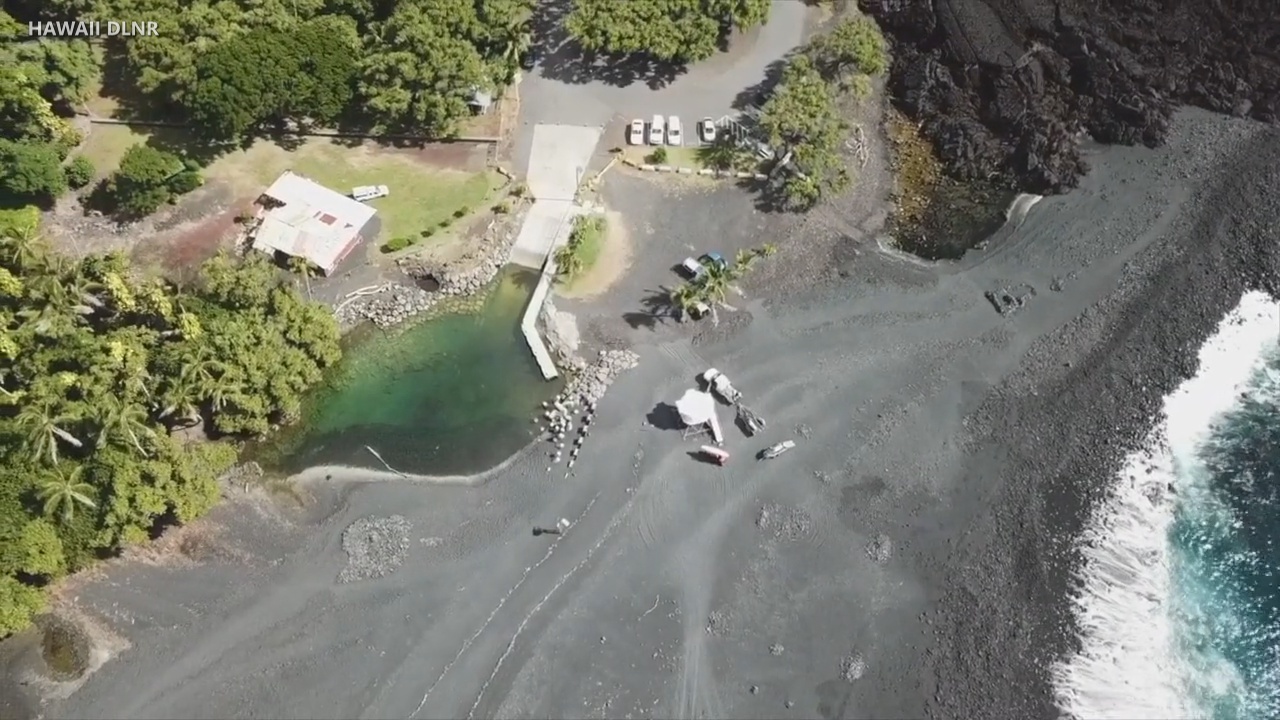 (BIVN) – Life has been found in the new anchialine ponds that appeared at Pohoiki, after the shoreline was transformed by the 2018 eruption of Kīlauea.

Fourteen months after the end of the lava flow that transformed the area around the popular Isaac Hale Beach Park in Puna, officials say the pools that were created on the new black sand beach now harbor native organisms.

An enormous and ever-growing black sand beach is not the only new feature at Pohoiki, the site of a former boat ramp, rendered obsolete after being surrounded by lava. Biologists from the DLNR Division of Aquatic Resources (DAR) have noted at least seven anchialine pools dotting the Pohoiki landscape.

Troy Sakihara explained, “Anchialine pools are brackish water pools that are land-locked,but are connected to the ocean and groundwater through the underground. They fluctuate with tides and while they may seem like unassuming, little puddles of water they are home to an array of endemic species found only in Hawai‘i.”

The most common aquatic creature found in Hawai‘i’s anchialine pools are ʻōpaeʻula, the tiny Hawaiian red shrimp. They’re popular in desktop aquariums and Sakihara describes them as very charismatic – not the least of which they’re ability to evolve and thrive in a variety of habitats like volcanic rock and sand.

Biologists say they’re not terribly surprised that ʻōpaeʻula and other native shrimp are beginning to show up at Pohoiki and likely in other anchialine pools up and down the Puna coast that were inundated by lava flows. The where and how of their reappearance is still a bit of a mystery, but experts do know that they quickly re-inhabit bomb impact craters at places like Kaho‘olawe. Sakihara said, “It is still a question that we’re trying to answer as far as how they recruit so fast into these pools.”

Historically anchialine pools have been critical sources of fresh water, particularly in arid regions. Hawai‘i has the highest concentrate of these ponds in the world, with a conservative estimate of 600 out of a worldwide total of a hundred thousand.

DAR Administrator Brian Neilson commented, “These pools are really valuable resources – ecologically, biologically, and culturally. Our team is currently working on a rules package to provide better management strategies for anchialine pools. One of the things people can do right now is to stay out of these sensitive areas. Sunscreens and other body oils can degrade water quality and potentially kill creatures like the ʻōpaeʻula.”

On a recent visit to Pohoiki, Neilson and Sakihara, watched a woman with a snorkel, float in one of the new anchialine pools for more than an hour. Neilson concluded, “We want to educate folks and ask them not to disturb these pools and minimize their interactions with them. Please don’t swim or snorkel in them, as you may be killing some of the most endangered aquatic creatures in the state. Respect them and enjoy them, with your eyes, only.”