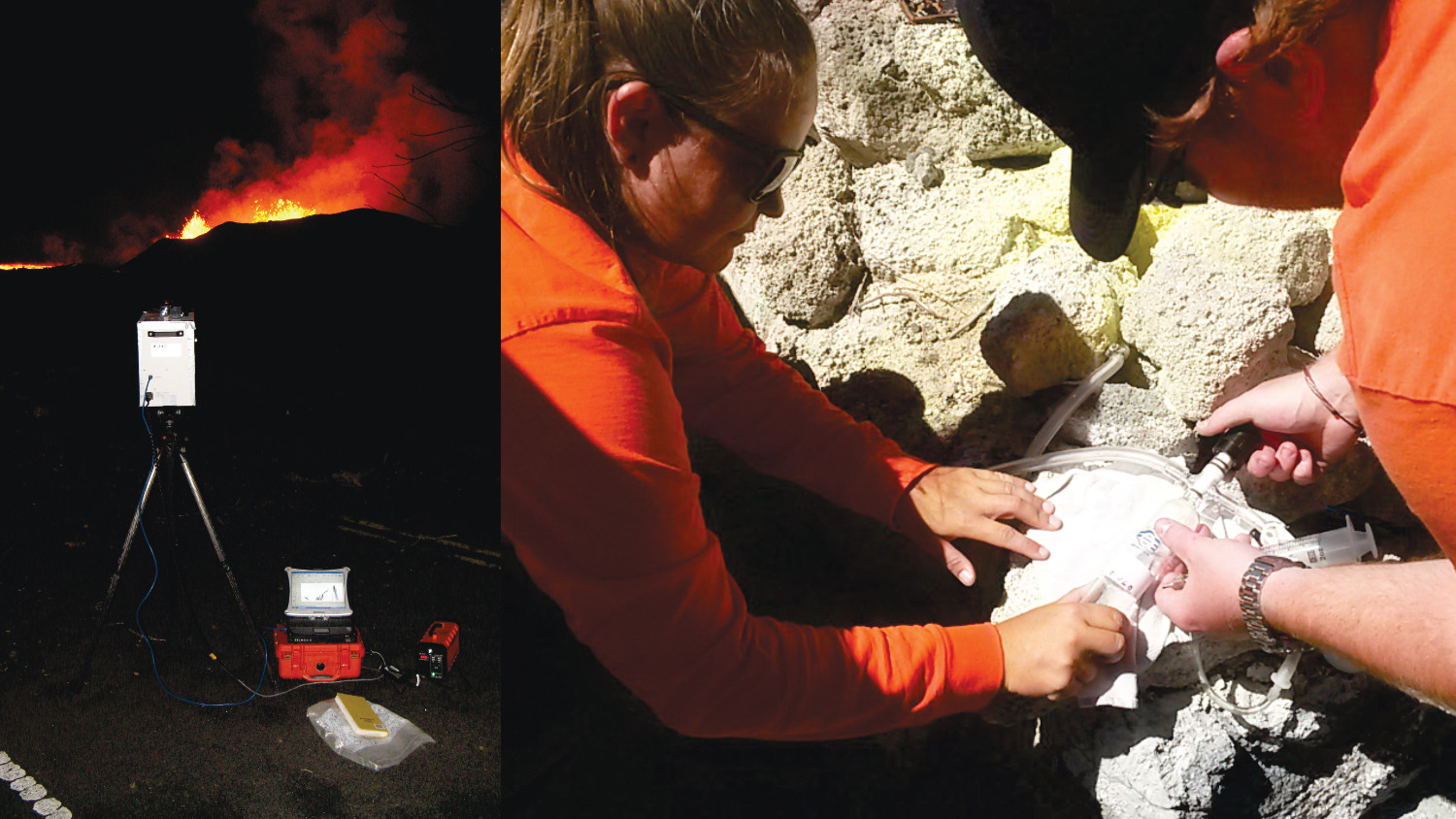 As many residents of the Island of Hawaiʻi can attest, volcanic gases can stink – literally. But for those of us at the USGS Hawaiian Volcano Observatory (HVO) who are lucky enough to study those gases, our jobs are actually pretty amazing.

Volcanic gases give clues about volcanic processes, even when no lava is erupting. This is because, similar to a bottle of soda with dissolved bubbles, magma contains dissolved gases that escape as it rises to the surface. Ratios of escaped gases like carbon dioxide (CO2) and sulfur dioxide (SO2) can tell us magma depth. The total amount of SO2 released also reflects the amount of magma or lava that is degassing.

No one single device or technique provides all the gas information we need to monitor Hawaiian volcanoes. We use a variety of methods to track gas emissions from Mauna Loa and Kīlauea, including direct measurements and indirect techniques called remote sensing.

One of our most frequent measurements is the SO2 emission rate—how many tonnes are emitted per day. For this, we don’t interact directly with the gas. Instead, we drive or walk under the gas plume with a tool called an ultraviolet spectrometer. SO2 absorbs ultraviolet light, so when more SO2 is present overhead, less ultraviolet light reaches the spectrometer.

In the current low-emission era at Kīlauea, these measurements are made once every 2-4 weeks. But during the 2018 eruption, we attempted to measure emission rates at least every other day. When Kīlauea’s summit lava lake was present, we had a network of ground-based spectrometers that calculated the SO2 emission rate every few seconds! There is no similar network at any other volcano in the world.

Another measurement we rely on is the ratio of CO2 to SO2. The relative amounts of those gases give us information about the depth of magma, as explained in our February 21, 2019, Volcano Watch.

CO2 does not absorb ultraviolet light like SO2, so we measure CO2 directly. To do this, we use sensors placed right in the volcanic gas. One such instrument—dubbed a ‘MultiGas’—was designed by colleagues at the USGS Cascades Volcano Observatory. The MultiGas pumps in gas and determines concentrations of CO2, SO2, H2S (hydrogen sulfide), and water vapor. We then calculate their ratios and track changes that might indicate magma rising within the volcano.

We have three types of MultiGas at HVO: permanent stations on Kīlauea and Mauna Loa that send data to HVO in real-time; a portable MultiGas, which is the size of a large briefcase and gives us flexibility to check gas chemistry in many places; and a miniaturized MultiGas mounted on UAS (Unoccupied Aircraft Systems, or drones) to measure gas in hazardous or inaccessible sites.

There are additional gases in volcanic plumes that are not present in large amounts but still provide information about volcanic behavior. To measure those minor gases, including chlorine, fluorine, and helium, we use remote and direct methods.

Many volcanic gases absorb infrared radiation, so during eruptions we can use remote sensing of infrared energy emitted by lava. A device called a Fourier Transform Infrared (FTIR) spectrometer detects different wavelengths of infrared and measures absorption by numerous gases simultaneously. This gives us many gas ratios that help us to understand degassing processes during eruptions.

Another way to measure multiple volcanic gases at once is to collect a bottle of gas and send it to the lab for chemical analysis. For this, we use a specialized glass bottle with tubing inserted into a degassing vent called a fumarole. This kind of sampling is currently done once every three months at Sulphur Banks in Hawaiʻi Volcanoes National Park to track long-term changes in gas chemistry.

That’s a lot of instrumentation, so the gas geochemistry team works closely with HVO technicians and IT specialists to make sure that all our equipment functions properly. We also spend time at our computers to process, interpret, and write up our data. This often involves exchanging ideas with other USGS colleagues, local partners, and scientists around the world to ensure that we understand our volcanoes and hazards as best as we can from the gas geochemistry perspective.

All that makes for a busy and exciting job, whether the gas stinks or not.

Next week, another HVO team will write about its work.