HILO, Hawaiʻi - Now that the COVID-19 outbreak is officially a pandemic, its uncertain if the festival will go on as planned, Mayor Harry Kim suggested today. 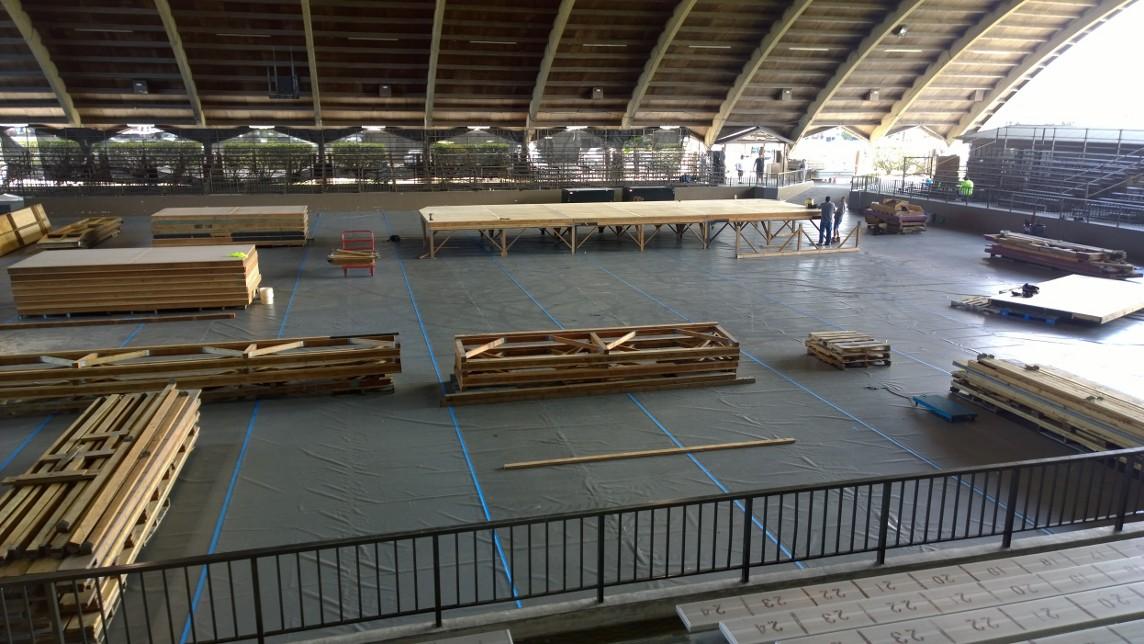 At the Edith Kanakaʻole Stadium, the setup for the Merrie Monarch Festival stage has already begun. Photo by Daryl Lee.

(BIVN) – Mayor Harry Kim told the Hawaiʻi County Council on Wednesday during an impromptu briefing on the global coronavirus outbreak that he already met with Merrie Monarch Festival organizers to discuss the possibility of having to cancel the annual Hilo event, and that a decision will have to made soon.

It was previously reported that there are no plans to cancel the event. But today, the World Health Organization declared the COVID-19 outbreak a pandemic. Events, conferences, and gatherings are being cancelled or postponed all over the world. For example, the Kapu‘uola Hula Festival – which celebrates hula and brings awareness to Pu‘uokapolei on Oʻahu – has been postponed due to the growing concerns around the virus. The event was scheduled for April 4.

At Wednesday’s meeting, Puna councilman Matt Kanealiʻi-Kleinfelder told the mayor he understands the need to balance economy and health, but said that “at some point, it’s gonna have to be public health over the economy. I think that’s really what we’re looking at.”

“That’s gonna be a very hard decision to make,” Kanealiʻi-Kleinfelder said. “I do not envy you.”

Mayor Kim said he hates to pick on the Merrie Monarch as an example, but “it’s obvious what we’re talking about,” and that a decision needs to be made as fast as possible, “because the longer we wait, the more inconvenient it gets.”

Mayor Kim talked about “stories of people who spend a whole year making things to sell, and that’s their livelihood for the year. So, I just need the public to know, and you to know, that we’re discussing it.”

The event attracts thousands to Hilo every year, who come from around the world.

“We are a hub,” said Council Chair Aaron Chung, “and I think really those who were in charge, not only here but in different places in the United States, they didn’t really foresee how how big this was gonna become. I mean, as long as you have travel it’s gonna become a problem. So, a pandemic: foregone conclusion. It’s how bad this pandemic is gonna be. That is the question, right?”

Big Island Video News will be posting the full video from Mayor Kim’s presentation on COVID-19 to council.