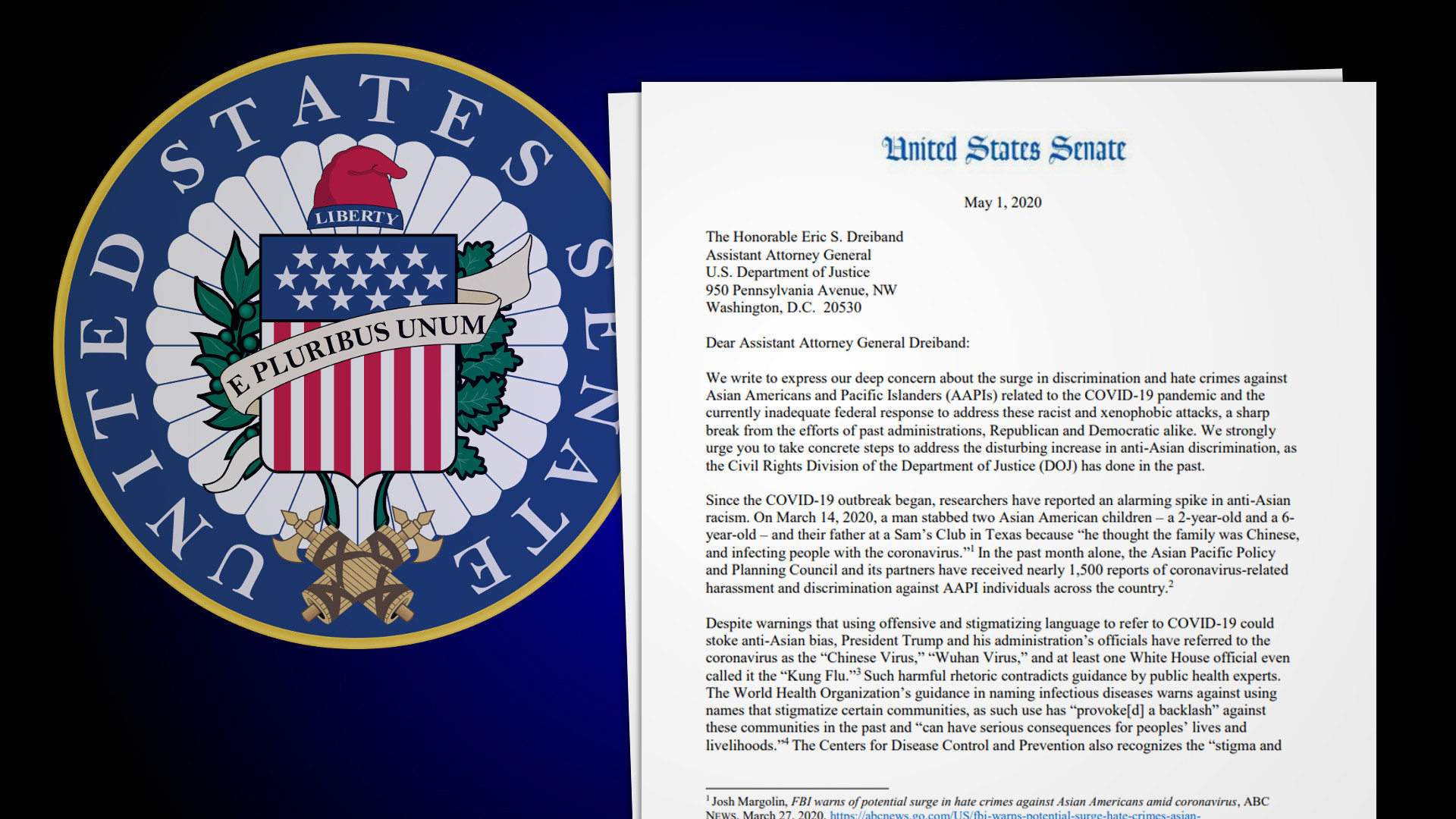 WASHINGTON D.C. - Sixteen U.S. senators are urging the Justice Department to address the surge in discrimination against Asian American and Pacific Islander individuals.

(BIVN) – With coronavirus-related hate crimes and discrimination on the rise in the time of the pandemic, Senator Mazie Hirono (D-Hawaiʻi) is joining 15 senate colleagues urging the Department of Justice’s Civil Rights Division to take concrete steps to address the surge, which targets Asian American and Pacific Islander individuals.

The Senators sent a letter to the DOJ after Asian American organizations collected nearly 1,500 incidents of anti-Asian harassment and discrimination in the last month alone, the office of Sen. Hirono said in a news release.

The senators are calling on the Justice Department’s Civil Rights Division to release a plan to address the situation, designate an official to coordinate an interagency response and a review of these incidents, and provide monthly updates to Congress.

The Senators also want the Division to conduct public outreach and engage with AAPI community leaders and distribute materials about civil rights protections in diverse languages.

Here is the full text of the letter to DOJ:

We write to express our deep concern about the surge in discrimination and hate crimes against Asian Americans and Pacific Islanders (AAPIs) related to the COVID-19 pandemic and the currently inadequate federal response to address these racist and xenophobic attacks, a sharp break from the efforts of past administrations, Republican and Democratic alike. We strongly urge you to take concrete steps to address the disturbing increase in anti-Asian discrimination, as the Civil Rights Division of the Department of Justice (DOJ) has done in the past.

Since the COVID-19 outbreak began, researchers have reported an alarming spike in anti-Asian racism. On March 14, 2020, a man stabbed two Asian American children – a 2-year-old and a 6- year-old – and their father at a Sam’s Club in Texas because “he thought the family was Chinese, and infecting people with the coronavirus.” In the past month alone, the Asian Pacific Policy and Planning Council and its partners have received nearly 1,500 reports of coronavirus-related harassment and discrimination against AAPI individuals across the country.

Despite warnings that using offensive and stigmatizing language to refer to COVID-19 could stoke anti-Asian bias, President Trump and his administration’s officials have referred to the coronavirus as the “Chinese Virus,” “Wuhan Virus,” and at least one White House official even called it the “Kung Flu.” Such harmful rhetoric contradicts guidance by public health experts. The World Health Organization’s guidance in naming infectious diseases warns against using names that stigmatize certain communities, as such use has “provoke[d] a backlash” against these communities in the past and “can have serious consequences for peoples’ lives and livelihoods.” The Centers for Disease Control and Prevention also recognizes the “stigma and discrimination [that] can occur when people associate a disease, such as COVID-19, with a population or nationality.”

In March 2020, the FBI assessed that “hate crime incidents against Asian Americans likely will surge across the United States, due to the spread of coronavirus disease … endangering Asian American communities.” Even though this warning was issued more than a month ago, the Department of Justice has taken little action. In response the Center for Public Integrity’s inquiries about DOJ’s actions to address the increase in anti-Asian discrimination and hate crimes, DOJ pointed to an op-ed you published in the Washington Examiner and a briefing call with Asian American advocacy groups. An op-ed and a briefing call are far from an adequate response from the Justice Department’s Civil Rights Division, whose stated purpose is to “uphold the civil and constitutional rights of all Americans, particularly some of the most vulnerable members of our society.”

By contrast, after the 9/11 terrorist attacks set off a wave of hate incidents against Arab, Muslim, Sikh and South Asian Americans, the Civil Rights Division implemented a plan with three major elements. This included “(1) a clear and plain statement to the American people that Arab, Muslim, Sikh, and South Asian Americans are Americans too, and that hate crimes and discrimination against them would not be tolerated; (2) outreach to the affected communities; and (3) coordination of civil rights enforcement across agencies at all levels of government.” DOJ established a crime task force with experienced federal prosecutors from the Civil Rights Division and various U.S. Attorney’s Offices. The Civil Rights Division also created a team within its National Origin Working Group to document reports of discrimination and make appropriate referrals within the Division and to other federal agencies, and to conduct outreach to affected communities with material translated into multiple languages. In 2011, the Division further acknowledged that significant challenges remained in addressing these issues, noting the concerns affected communities raised regarding other federal programs implemented in the aftermath of 9/11.

There are more than 20 million Americans of Asian descent, and 2 million AAPI individuals are working on the front lines of the COVID-19 pandemic, as health care workers, law enforcement agents, first responders, and other essential service providers. It is critical that the Civil Rights Division ensure that the civil and constitutional rights of all Americans are protected during this pandemic. To address the spike in anti-Asian discrimination and hate crimes, we ask that the Civil Rights Division immediately:

· Develop and publicly release a plan that sets forth how the Civil Rights Division will address the increase in discrimination and hate crimes against AAPI individuals;

· Designate a DOJ official responsible for coordinating (a) a review of discrimination and hate crimes related to COVID-19 and (b) an interagency response to this issue;

· Provide monthly reports to Congress on the (a) number of incidents of discrimination and hate crimes related to COVID-19 received—disaggregated by race, ethnicity, and gender, and (b) status of related cases that are pending;

· Conduct extensive outreach in partnership with community-based organizations and regularly meet with AAPI community leaders; and

Thank you in advance for your prompt attention to this matter.