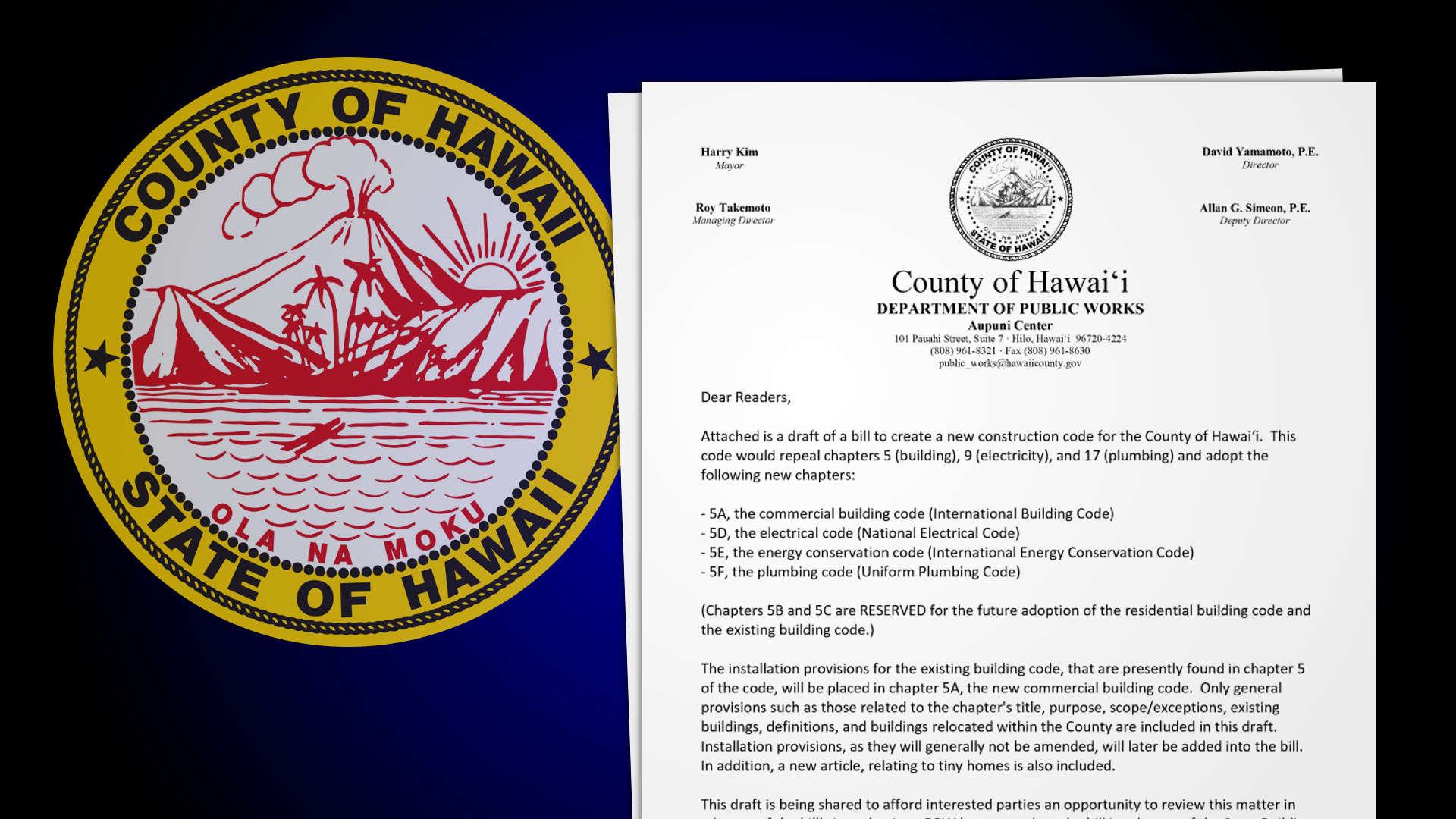 HAWAIʻI ISLAND - The County of Hawaiʻi is seeking input from design professionals and the general public regarding changes to the County’s Administrative, Electrical, and Plumbing Codes.

(BIVN) – The public is being invited to provide comments on proposed changes to Hawaiʻi County’s Building Administrative Code.

This media release was recently issued by the Hawaiʻi County Department of Public Works:

The County of Hawai‘i Department of Public Works Building Division invites design and construction professionals to submit comments regarding proposed amendments to the County’s Building Administrative Code. The Administrative Code also includes proposed changes to the Electrical and Plumbing Codes and the addition of a tiny homes appendix. Due to the current pandemic, public meetings will not be held on the code changes, rather interested community members have until 4:30 p.m. on Friday, June 5, 2020, to provide input via email to cohbuild@hawaiicounty.gov.

These amendments are proposed in response to the building and construction codes adopted by the State Building Council and are part of a phased overhaul of energy, building, electrical, plumbing, and outdoor lighting codes to meet modern construction standards. The County began this process last fall with proposed revisions to the County’s Energy Conservation Code, which subsequently became law when its amendments were adopted as part of the 2015 International Energy Conservation Code in Chapter 5 of the Hawai‘i County Code.

The next phase of the code overhaul focuses on a reorganization of the building and construction codes. Amendments will be restructured into a new bill (internally called the “Admin Code bill”) that will allow the consolidation of the other codes under a new Chapter 5. The existing Chapter 5 (Building Code), Chapter 9, (Electrical Code), and Chapter 17 (Plumbing Code), will all be repealed and its provisions will be placed in the new Chapter 5, so that future updates to the codes will be consistent with each other using the same definitions. Adoption of this new framework of the County’s building and construction codes will ease the process of updating future installation requirements on an ongoing basis.

To help facilitate the process, the County of Hawaiʻi says comments on proposed amendments should contain the following written information:

The draft Administrative, Electrical, and Plumbing Code amendments are available on the Hawaiʻi County website.