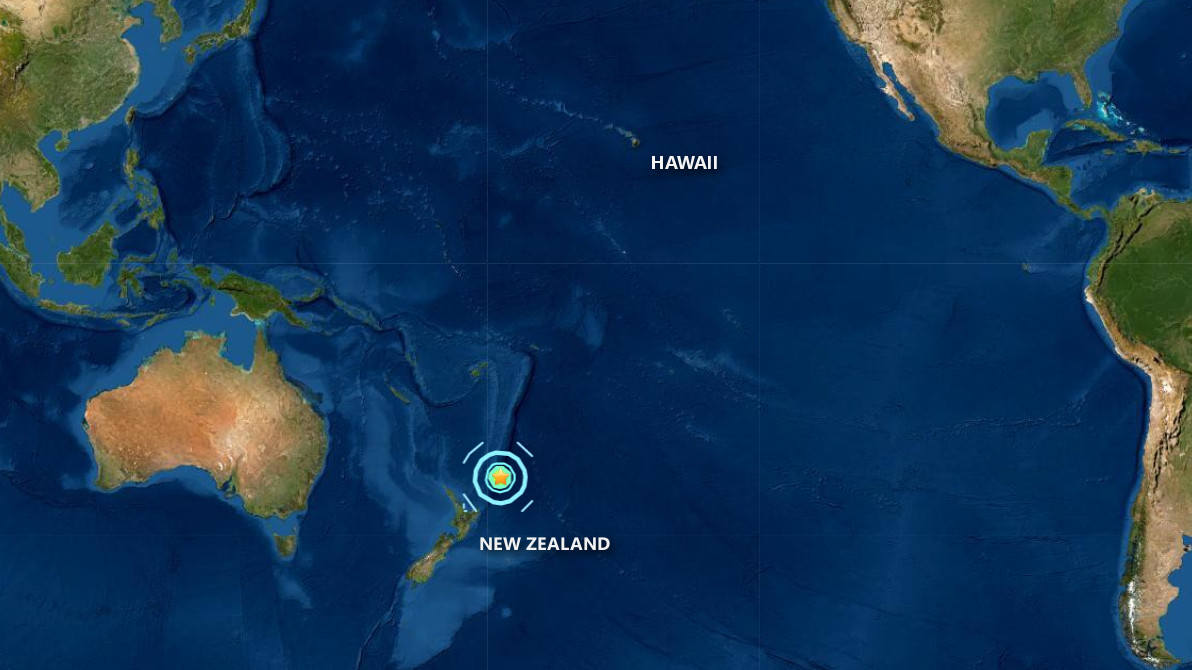 image of interactive map by USGS, labels added by BIVN

HAWAIʻI - The Pacific Tsunami Warning Center confirms there is no tsunami threat from this morning's strong earthquake in the vicinity of the Kermadec Islands, north of New Zealand.

(BIVN) – There is no tsunami threat to Hawaiʻi from this morning’s distant Magnitude 7.4 earthquake in the vicinity of the Kermadec Islands, north of New Zealand.

The Pacific Tsunami Warning Center confirmed there is no tsunami threat to the Island and State of Hawaiʻi. The Hawaiʻi County Civil Defense agency repeated the message in a Thursday morning radio alert.

The U.S. Geological Survey provided this tectonic summery on the location of the earthquake this morning:

The June 18, 2020, M 7.4 Kermadec Islands region earthquake occurred as the result of shallow strike slip faulting near the Kermadec Trench where the Pacific plate begins its descent into the mantle beneath the eastern edge of the Australia plate. Focal mechanism solutions indicate that rupture occurred on a steeply dipping fault striking either to the southwest (left-lateral) or to the southeast (right-lateral). At the location of this earthquake, the Pacific plate is converging with Australia in a westward direction at a velocity of about 55 mm/yr. The focal mechanism solution and depth (about 30 km) of the event suggest that it ruptured a strike slip fault within the shallow oceanic lithosphere of the Pacific plate; the location suggests a source near the trench, within the oceanic plate near the outer rise region. While commonly plotted as points on maps, earthquakes of this size are more appropriately described as slip over a larger fault area. Strike slip events of the size of the June 18, 2020, earthquake are typically about 110×20 km (length x width).

The June 18th earthquake struck in an oceanic region with few nearby populations, approximately 650 km to north of Bay of Plenty, New Zealand. This region of the Tonga-Kermadec subduction zone experiences high levels of seismic activity, with nearly 20 events of M 6.5+ over the past half century within 250 km of the June 18 event. While M7+ earthquakes along the Kermadec Arc are generally common, this section of the subduction zone has hosted just one such event, a M 7.4 earthquake in May 2006 at an intermediate depth within the subducting Pacific slab to the west of today’s earthquake. No historic seismicity in this region is known to have resulted in damage or casualties.