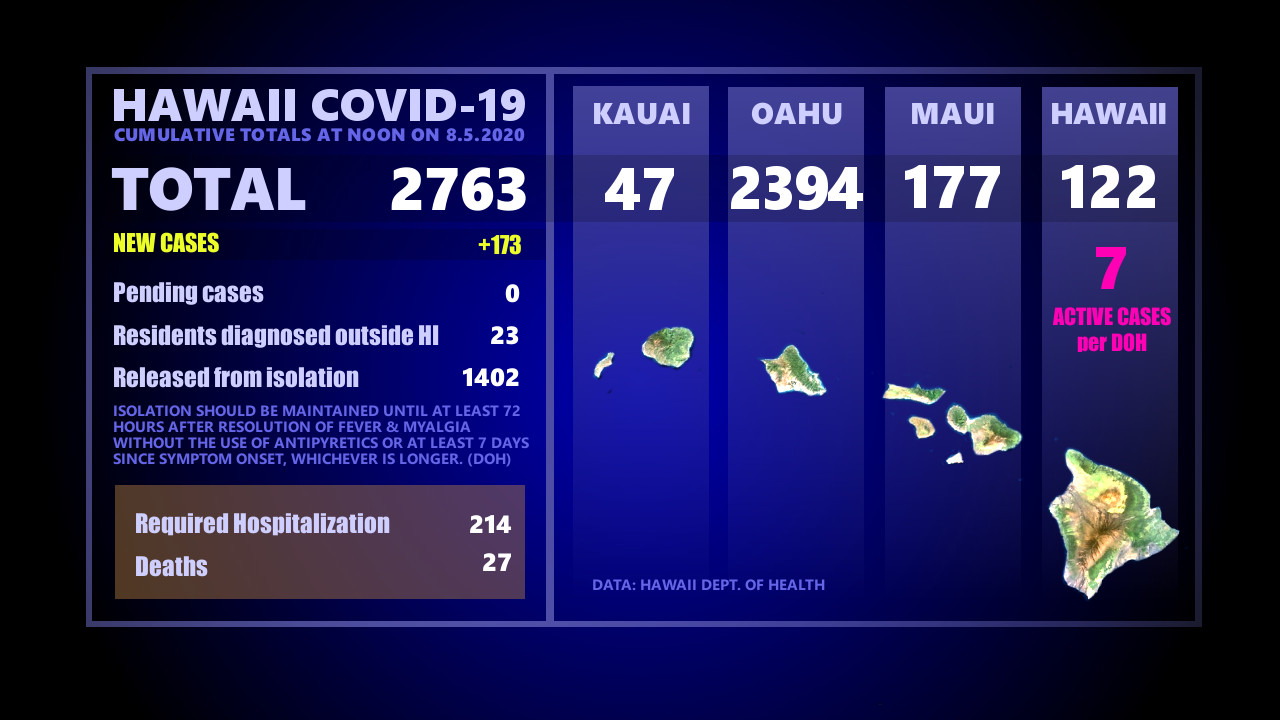 HAWAIʻI - A Battalion Chief assigned to the 2nd Battalion headquartered at the Waikoloa Fire Station has tested positive for COVID-19, the County reports.

(BIVN) – The State of Hawaiʻi reported 173 new cases of COVID-19 statewide at noon today, with all the cases identified on Oʻahu.

There are no new cases on Hawaiʻi island, according to the Hawaiʻi Department of Health. There are currently seven (7) active cases on the Big Island.


From a news release issued by the County of Hawaiʻi today after 1 p.m. HST:

The Hawai‘i Fire Department reported on Wednesday that a Battalion Chief assigned to the 2nd Battalion headquartered at the Waikoloa Fire Station has tested positive for COVID-19. A total of five personnel are currently self-quarantined as a precaution; all are asymptomatic.

The Battalion Chief, who also remains asymptomatic, took the COVID-19 test on Saturday in compliance with pre/post travel requirements to O‘ahu. On Monday he received the positive testresult, and notified command. After notification of the positive result, the Fire Department disinfected the entire Waikoloa Fire Station. Fire Chief Darren Rosario assures the community that emergency responses will not be affected.

“All Fire personnel considered possible contacts will follow Department protocols and will receive two COVID-19 tests over the course of this week and next week. They must receive negative tests in order to return to work, following Department protocols,” Chief Rosario said. The Battalion Chief remains in isolation, monitored by the Department of Health.

“I am sincerely grateful for the responsible actions of our entire Big Island community towards keeping COVID-19 off of our Island,” Chief Rosario said.

In a morning civil defense message, the County of Hawaiʻi reported one positive case at Liberty Dialysis in Hilo. To ensure the safety of all clients and staff, the Department of Health and County of Hawaii Task Force said it is working closely with the administration of the dialysis center in response to this incident. “This includes screening and testing of all those that could have been infected and the disinfecting of the dialysis facilities,” the County stated. “Testing began yesterday and approximately 200 people were already tested.”

Yesterday, 3,029 people arrived in Hawaii. During this same time last year approximately 38,000 passengers arrived in Hawaii daily, including residents and visitors. The state’s mandatory 14-day self-quarantine started on March 26th for all passengers arriving in Hawaii from out of state. This table shows the number of people who arrived by air from out of state yesterday and does not include interisland travel. This data was collected from the Hawaii Department of Transportation’s (DOT) Mandatory Travel Declaration Form.