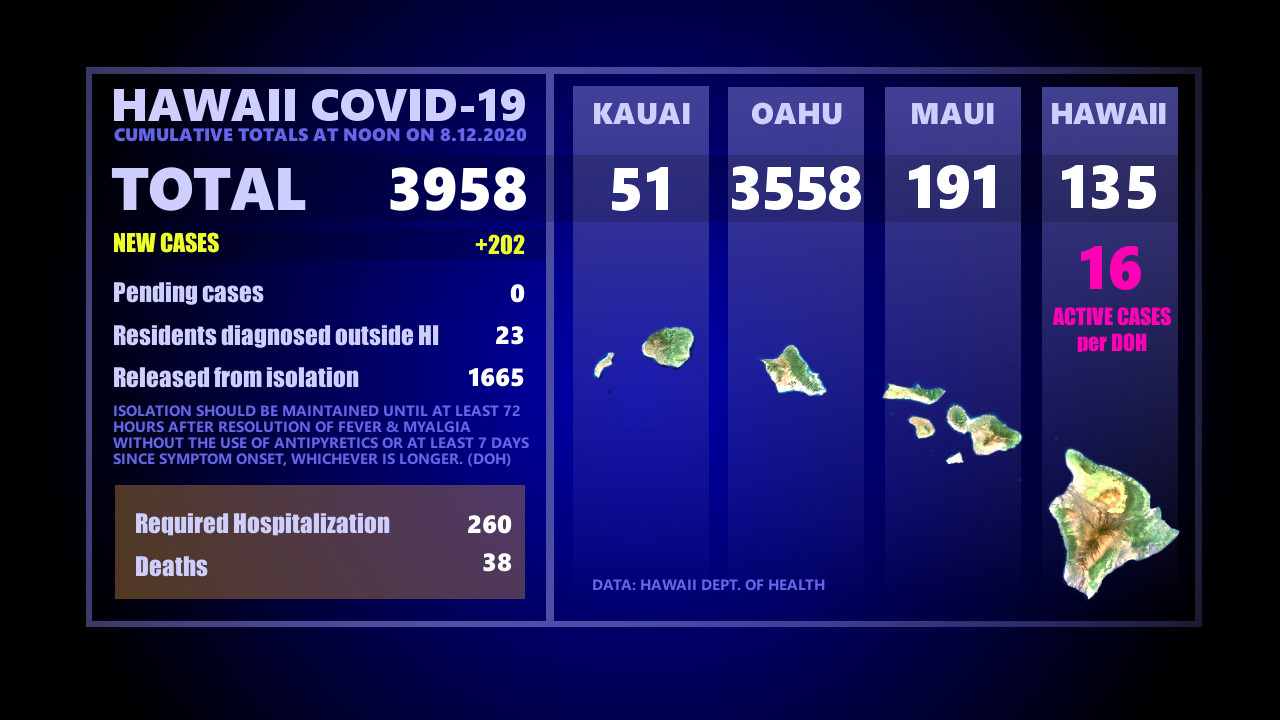 HAWAIʻI ISLAND - The state has identified several distinct restaurant clusters, but says each one "involves a few employees at single locations, and no transmission to customers has been identified at this time."

(BIVN) – There were 202 newly diagnosed cases of COVID-19 in the State of Hawaiʻi reported as of noon on Wednesday. 197 were identified on O‘ahu, health officials say. Hawai‘i Island and Kaua‘i each had two (2) additional cases, while Maui reported one (1).

The State indicated sixteen (16) of the cases counted on Hawaiʻi island are active.

There are multiple clusters of infections, including five (5) distinct restaurant clusters; however, each involves a few employees at single locations, and no transmission to customers has been identified at this time. An employee potluck at Honolulu Hale is a potential transmission source for 11 cases of illness among City and County of Honolulu workers.

State Health Director Dr. Bruce Anderson said, “The important factor to keep in mind is, community-associated infections continue to be the responsible for the surge in COVID-19 cases in the past week and a half. The virus is transmitted though droplets, and that’s why wearing masks and distancing is so important. We must all continue these and other safe practices.” The department is investigating these cases and working with these establishments on quarantine and prevention measures for their staff. There is no risk to the public at this time and no cases beyond the workers. As more information becomes available it will be shared.

Anderson also extended condolences to the family and friends of four O‘ahu men; the latest victims of the disease.

The State says there were 2,726 additional COVID-19 tests reported via electronic laboratory reporting. Of the 150,233 individuals tested by clinical and State laboratories, health officials say 3,958 were positive, and 21 test results were inconclusive.

Yesterday, 2,253 people arrived in Hawaii. During this same time last year approximately 36,000 passengers arrived in Hawaii daily, including residents and visitors. The state’s mandatory 14-day self-quarantine started on March 26th for all passengers arriving in Hawaii from out of state. This table shows the number of people who arrived by air from out of state yesterday and does not include interisland travel. This data was collected from the Hawaii Department of Transportation’s (DOT) Mandatory Travel Declaration Form.