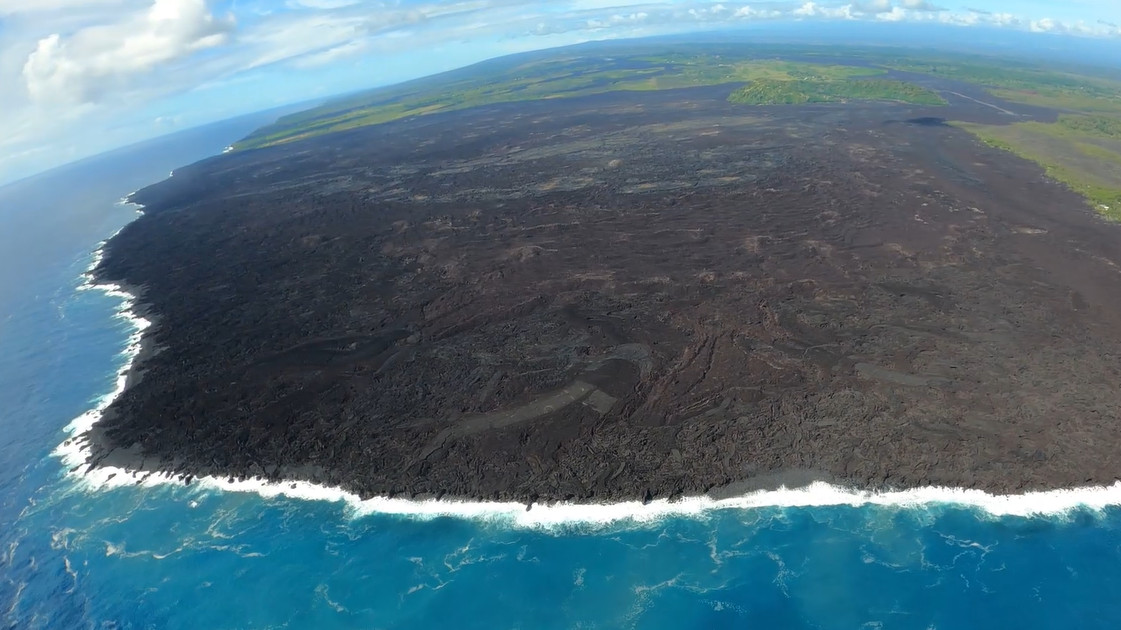 Image from USGS video shows the new coastline created during the 2018 eruption in the Kapoho area.

HAWAIʻI ISLAND - In this week's article, the USGS Hawaiian Volcano Observatory writes about using the ocean to track volcanic activity at Kīlauea. 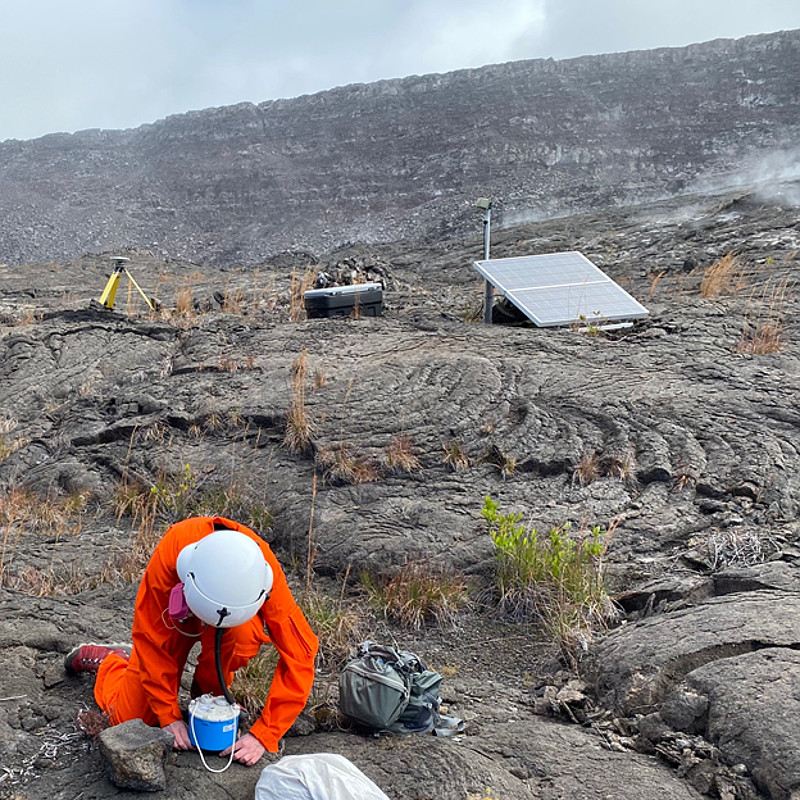 A Hawaiian Volcano Observatory scientist services one of the temporary seismometers deployed on the down-drop block at Kīlauea summit near the rim of Halemaʻumaʻu crater. Instrumentation associated with HVO’s permanent Global Positioning System (GPS) network can be seen in the background. USGS photo taken by N. Bennington on February 11, 2021.

(BIVN) – This week’s Volcano Watch article, written by U.S. Geological Survey Hawaiian Volcano Observatory scientists and affiliates, examines the data recorded during the events leading up to the 2018 eruption of Kīlauea on the lower East Rift Zone:

Ocean swells occur continuously around the world. As these swells rise and fall, they couple with the ocean floor below them creating a constant signal. These signals, called oceanic microseisms, travel through the solid earth and are observed at the surface using instruments called seismometers.

The USGS Hawaiian Volcano Observatory (HVO) has a number of seismometers in place across Kīlauea Volcano for monitoring volcanic processes and active fault movements. When magma is not moving within or erupting from Kīlauea, the oceanic microseisms appear on seismometers as a repeating and unchanged signal.

The microseismic signals display large variations during periods when Kīlauea is inflating or deflating due to magma moving beneath its surface. Similar variations occur when the volcano is actively erupting, such as now. Scientists measure differences in these observed microseisms during periods of volcanic activity relative to times of quiet, in an effort to identify when, where, and for how long magma is migrating and being stored within Kīlauea.

HVO scientists recently applied this technique to better understand the events leading up to the 2018 lower East Rift Zone eruption and summit collapse. Microseism data combined with more traditional seismic and deformation patterns document the increase of pressure within the shallow region of the magma storage reservoir at Kīlauea’s summit. Both the summit and the East Rift Zone immediately began expanding rapidly, suggesting that magma was moving into these regions.

Variations in microseisms also revealed that a magnitude-5.3 earthquake a year earlier had significantly weakened the volcanic crust directly beneath Pu‘u ‘Ō‘ō. HVO scientists hypothesized that the combination of increased pressure at Kīlauea’s summit and the weakening of the shallow crust beneath Pu‘u ‘Ō‘ō, created conditions favorable for magma to move downrift and erupt in 2018.

HVO scientists recently deployed eight additional temporary seismometers around Halemaʻumaʻu crater, at the summit of Kīlauea, to track magma movements beneath the new lava lake. These temporary seismometers, along with HVO’s permanent seismic network, allow for a larger spatial sampling of the oceanic microseisms traveling through Kīlauea’s magma reservoir. This, in turn, means a denser sampling of where physical changes are occurring beneath the crater.

Confinement of the ongoing eruption within Halemaʻumaʻu crater at Kīlaueaʻs summit is ideal for surveying the physical mechanisms associated with this eruption. With analysis of these data, scientists at HVO hope to answer several questions: 1) where is the magma source and pathways for this eruption?; 2) can this technique help us understand small increases and decreases in volcanic activity observed at times during this eruption?; 3) can this technique provide clues for when the eruption will end?; and 4) how can we apply what we have learned in this study to assist in better understanding and forecasting volcanic activity associated with future eruptions at Kīlauea?