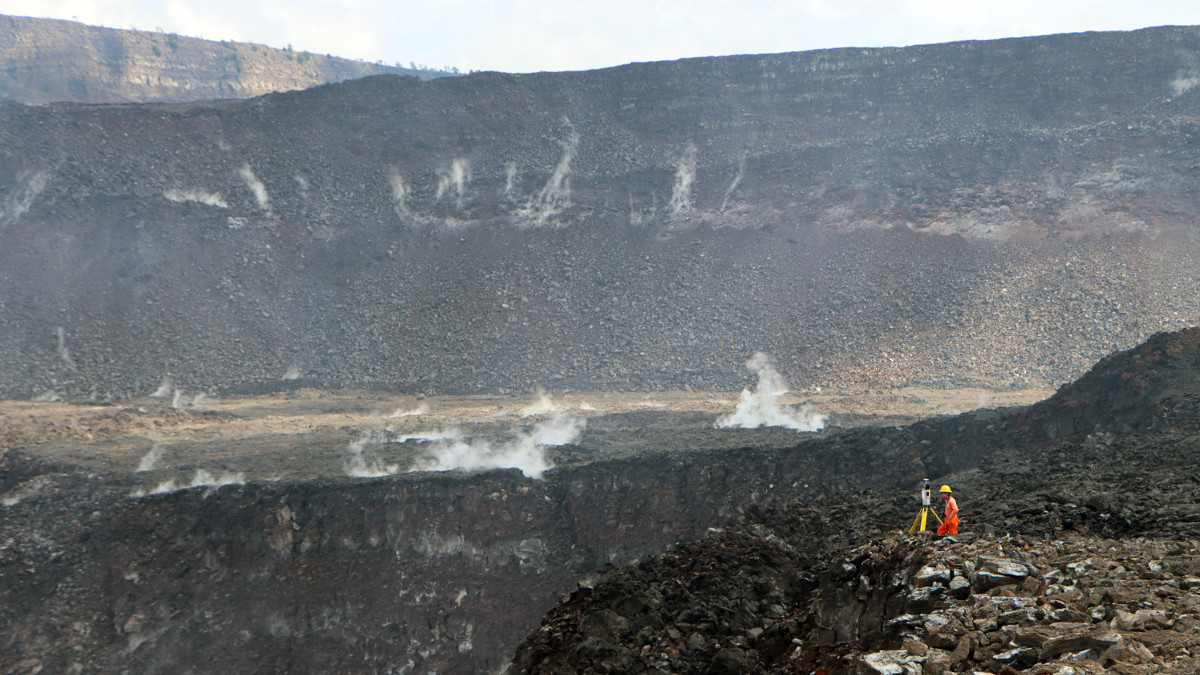 An HVO geologist surveys the lava lake from the eastern rim of Halema‘uma‘u Crater, at the summit of Kīlauea. The cliff that covers most of the top half of the photo formed during the collapse events of 2018, and gives a sense of the scale of that event. USGS photo by M. Patrick on April 16, 2021.

HAWAIʻI VOLCANOES NATIONAL PARK - The summit eruption of Kīlauea volcano continues on the island of Hawai‘i, and the lava lake continues to grow deeper. 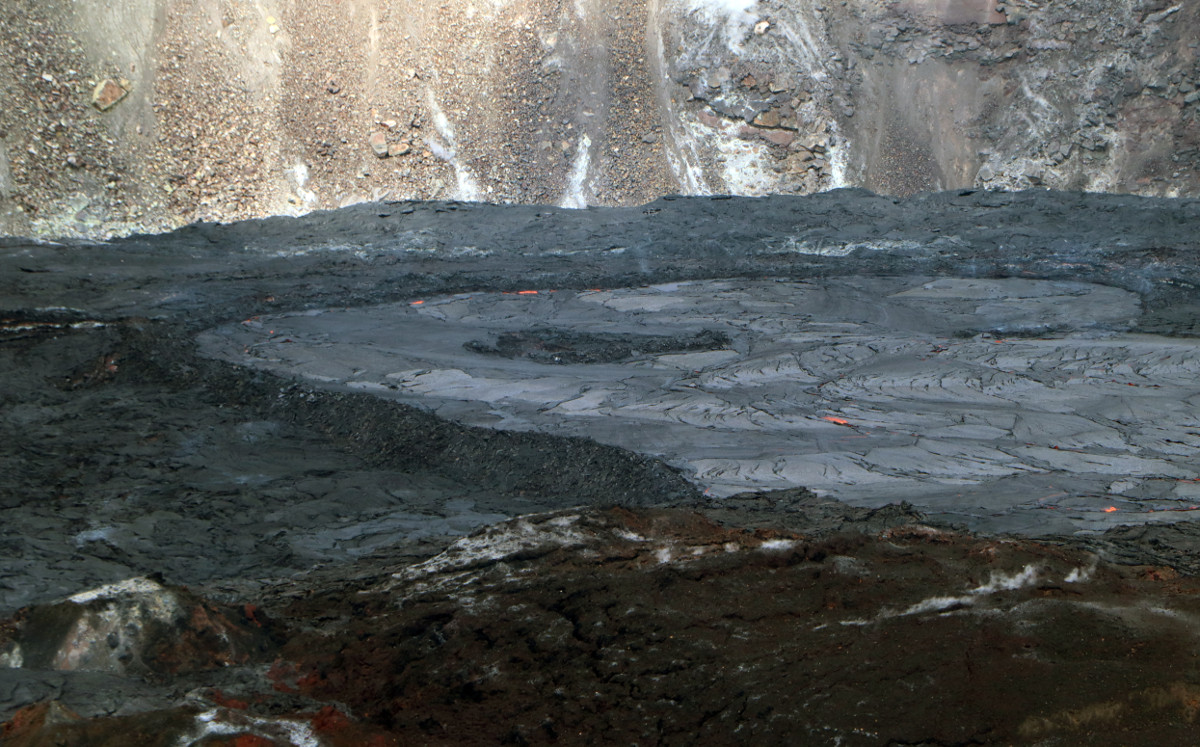 A view of the south margin of the perched lava lake in Halema‘uma‘u Crater, at the summit of Kīlauea. This photo was taken from the east rim of the crater, and shows the steep levee containing the lake. USGS photo by M. Patrick.

(BIVN) – The eruption of Kīlauea continues, with all activity confined to Halemaʻumaʻu crater at the summit of the volcano.

The USGS Hawaiian Volcano Observatory recently shared photos taken during a survey of the Halema‘uma‘u east rim and lava lake. Scientists collect detailed data to “assess hazards and understand how the eruption is evolving at Kīlauea’s summit, all of which are shared with the National Park Service and emergency managers.”

Officials say access to this hazardous area is by permission from, and in coordination with, Hawai‘i Volcanoes National Park. 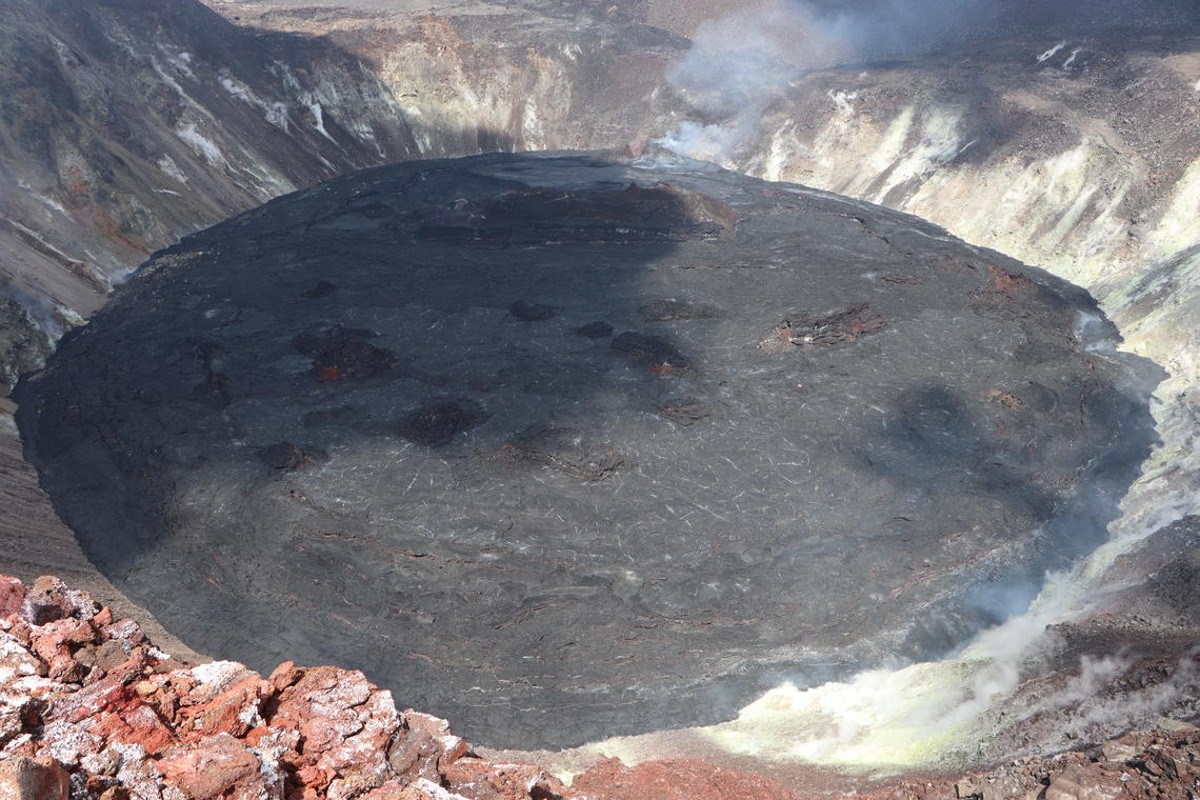 A view of the lava lake from the east rim of Halema‘uma‘u Crater, at the summit of Kīlauea. The active portion of the lake is present at the far (western) end of the crater. USGS photo by M. Patrick on April 16, 2021.

Here is the most recent (April 19) update from USGS HVO:

Activity Summary: Kīlauea Volcano is erupting. Lava activity is confined to Halemaʻumaʻu with lava erupting from a vent on the northwest side of the crater. This morning, April 19, the lava lake was 226 m (741 ft) deep and remains stagnant over its eastern half. SO2 emission rates remain elevated at 950 t/day, last measured on April 14.

Summit Observations: The most recent sulfur dioxide emission rate, measured on April 14, was 950 t/day. This is elevated compared to rates in the months before the eruption started on December 20 (less than 100 t/day), but lower than emission rates from the pre-2018 lava lake (around 5,000 t/day). Summit tiltmeters recorded minor change over the past 24 hours. Seismicity remains stable, with elevated tremor.

East Rift Zone Observations: No unusual activity noted in the region. Geodetic monitors indicate that the summit and upper East Rift Zone—between the summit and Puʻuʻōʻō—is refilling at rates similar to those measured over the past 2 years and before the December 2020 eruption. SO2 and H2S emissions from Puʻuʻōʻō were below instrumental detection levels when last measured on January 7.

Near-real time webcam views of the lava lake can be found here: https://www.usgs.gov/volcanoes/kilauea/webcams.

Hazard Analysis: High levels of volcanic gas are the primary hazard of concern regarding the ongoing activity at Kīlauea’s summit, with additional hazards from crater wall instability and rockfalls. Large amounts of volcanic gas—primarily water vapor (H2O), carbon dioxide (CO2), and sulfur dioxide (SO2)—are continuously released during eruptions of Kīlauea Volcano. As SO2 is released from the summit, it will react in the atmosphere to create the visible haze known as vog (volcanic smog) that has been observed downwind of Kīlauea. Vog creates the potential for airborne health hazards to residents and visitors, damages agricultural crops and other plants, and affects livestock. The unstable nature of the crater rim is a hazard surrounding Halemaʻumaʻu crater, an area that has been closed to the public since early 2008. Pele’s hair and other lightweight volcanic glass fragments from the lava fountains within Halemaʻumaʻu will fall downwind of the fissure vents and lava lake, dusting the ground within a few hundred meters (yards) of the vent. Strong winds may waft lighter particles to greater distances. Residents should minimize exposure to these volcanic particles, which can cause skin and eye irritation similar to volcanic ash.