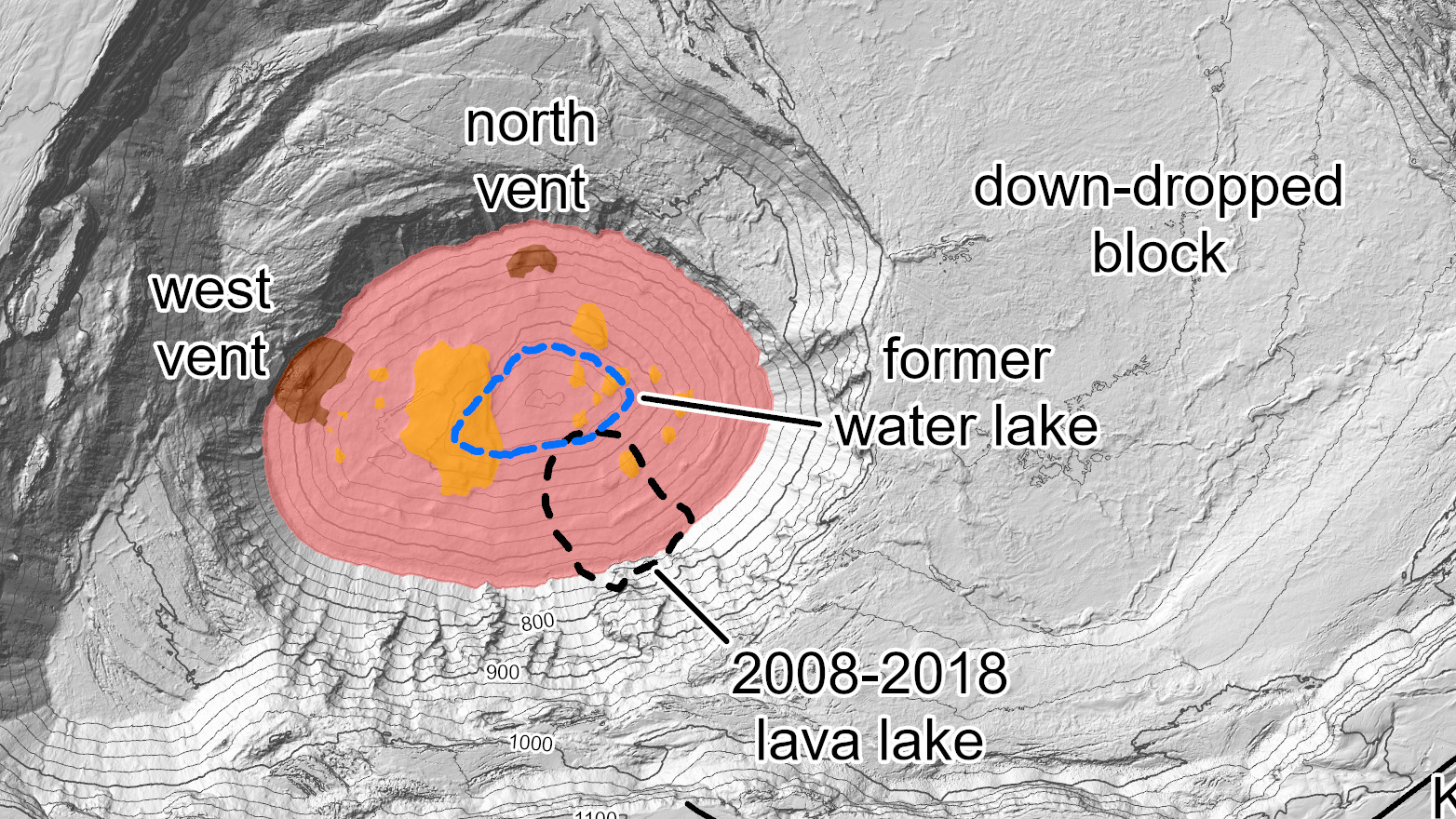 Inset of USGS map showing the lava lake level in Halemaʻumaʻu at the summit of Kīlauea. Full graphic below.

HAWAIʻI VOLCANOES NATIONAL PARK - If the pause in the eruption of Kīlauea volcano continues to August 24th, it will likely mean this eruption is over. 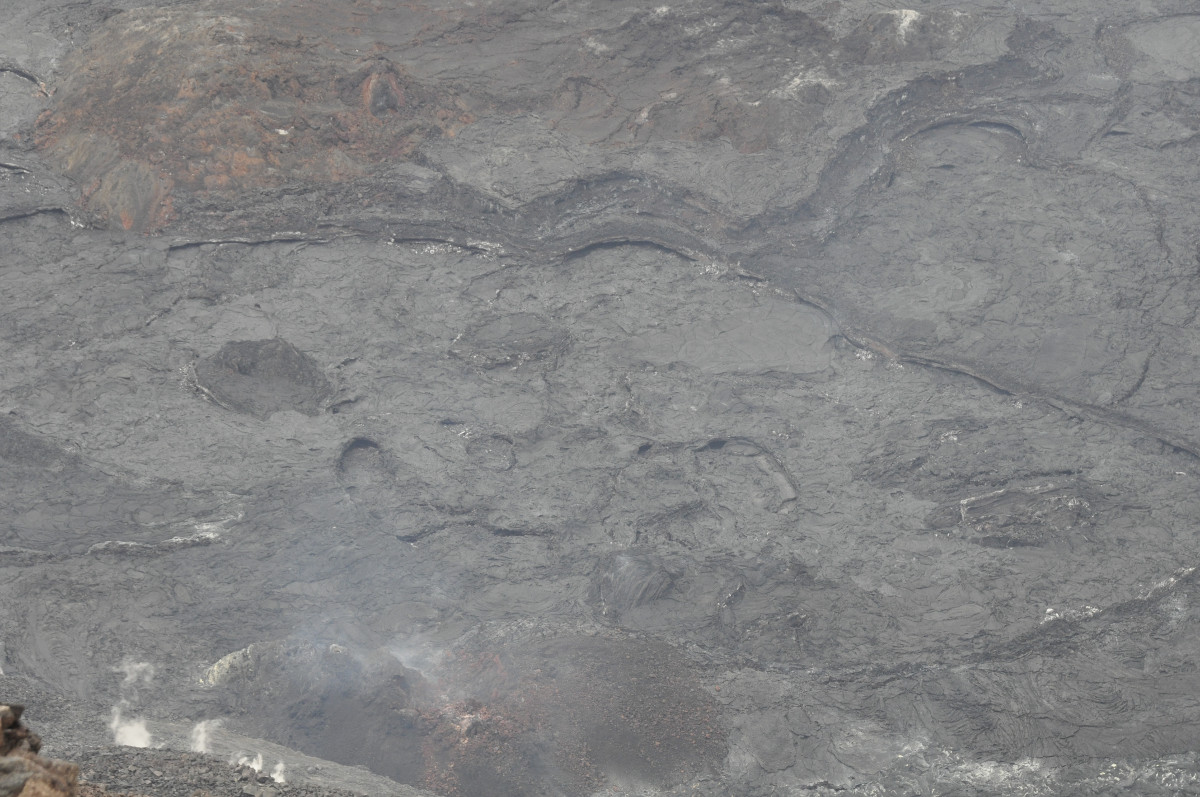 View looking to the east of the western part of the now inactive lava lake in Halema‘uma‘u at the summit of Kīlauea Volcano, taken on May 28th. The west vent area is at the bottom. The glowing vent area in the photo taken in the evening on May 24th is visible in the bottom right, with a white rim at the top of the now inactive vent. Part of the main island is visible in the top third of the photo. USGS photo taken by N. Deligne.

(BIVN) – Kīlauea’s is no longer erupting, as scientists report the lava supply to the Halemaʻumaʻu lava lake at the volcano summit “has ceased and sulfur dioxide emissions have decreased to near pre-eruption background levels.”

As scientists from the USGS Hawaiian Volcano Observatory explain in this week’s Volcano Watch article, only time will tell if the eruption is over.

Kīlauea’s recent volcano alert-level change, from Watch to Advisory, has attracted some attention.

The June 1, 2021, USGS Hawaiian Volcano Observatory (HVO) Kīlauea weekly update summary reads: “Kīlauea Volcano is no longer erupting. No surface activity has been observed…It is possible that the Halema‘uma‘u vent could resume eruption or that Kīlauea is entering a period of quiescence prior to the next eruption.”

We pick up the conversation where last week’s Volcano Watch article left off, with a more detailed explanation of why a three-month-long window is useful in defining an eruption “pause.” We’ll look at this from both a global (statistical) perspective and a Kīlauea (historical) perspective.

The Smithsonian Global Volcanism Project maintains a database of all known volcanic eruptions. This database provides the broad range of eruption statistics, including global averages of eruption frequency and pauses. For known eruptions that have been well-observed, a “pause” in activity within an eruption can typically last up to 90 days. 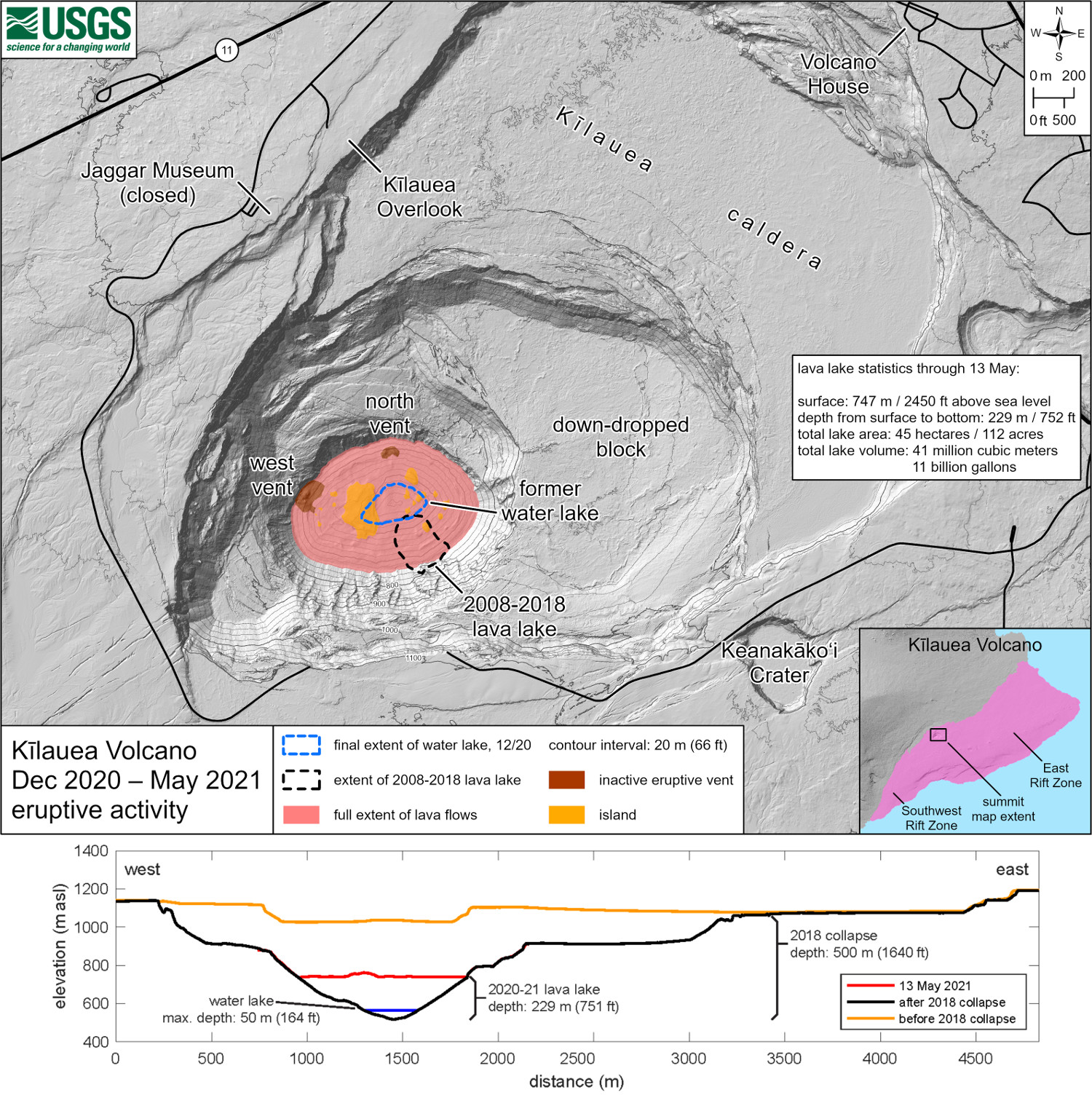 This map of Halema‘uma‘u at the summit of Kīlauea shows 20 m (66 ft) contour lines (dark gray) that mark locations of equal elevation above sea level (asl). The map shows that the lava lake filled 229 m (752 ft) of the crater, to an elevation of 747 m (2450 ft) asl, from the beginning of the eruption on December 20, 2020, through May 13, 2021. Over this period, a total of 41 million cubic meters (11 billion gallons) of lava was erupted into the crater, filling approximately 5 percent of the volume that collapsed within the caldera during the 2018 eruption. The graphic at the bottom shows topographic profiles from west to east across the caldera before 2018, shortly after 2018, and as of May 13, 2021, along with the 2019-2020 Halema‘uma‘u water lake. The last activity on the lava lake surface was observed on May 23 and on May 26, 2021, the USGS Hawaiian Volcano Observatory lowered the Volcano Alert Level for ground-based hazards from WATCH to ADVISORY and the Aviation Color Code from ORANGE to YELLOW. USGS map.

When a gap in activity lasts for longer than 90 days, it typically (but not always) becomes a much longer period of volcanic rest and can stretch from years to millennia (such as a frequently active volcano versus a sleepy stratovolcano). Any new eruptive activity thus becomes “the next eruption.” A new eruption could begin in the same region—for example, “the summit region”—or in a different region like on a rift zone, and should be preceded by its own precursory unrest that is typical of that volcano.

If an eruption is to resume activity, it will often do so within the 90-day window and, typically (but not always), lava resumes erupting from the same vent. Reviewing Kīlauea’s recorded history since 1823, the Smithsonian’s 90-day window of inactivity mostly holds true with one exception. A pause lasting 3.5 months occurred during the Maunaulu eruption of 1969–74.

The pauses between episodic fountaining during these eruptions are also called “repose periods.” HVO scientists were able to tell that the eruption had only paused because each fountaining episode was followed by predictable patterns of rapid inflation and escalating earthquake activity.

All other well-documented mid-eruption pauses during Kīlauea eruptions resumed in a month or less. Recently, there were two pauses in Kīlauea’s 2018 lower East Rift Zone eruption. From May 9–12, 2018, a 63-hour-long pause ended with an eruption from a new vent, fissure 16. However, at Ahuʻailāʻau (fissure 8), there was a 15-day pause in lava effusion at the end of August 2018 before lava reappeared in Ahuʻailāʻau during September 1–4. After a 90-day-window, HVO determined that the eruption was over. Kīlauea entered a 2.25-year-long period of rest that ended with the summit fissure eruption in Halemaʻumaʻu crater that began December 20, 2020.

Kīlauea’s recent summit eruption within Halema‘uma‘u was determined to be paused on May 27th, after a period with no visible lava, no rise of the lake surface, and decrease in sulfur dioxide (SO2) emissions. If the pause continues to August 24th, it will likely mean this eruption is over.

In the past, numerous eruptions have taken place within Halema‘uma‘u crater—the home of Pele, the Hawaiian volcano-deity. Continued diligent monitoring of Kīlauea by HVO will inform us over the next several months if the eruption will continue or if we must wait longer for the next eruption to begin. Quiescence between eruptions can last months to decades on Kīlauea and HVO monitors Kīlauea volcano closely for any signs of renewed activity.