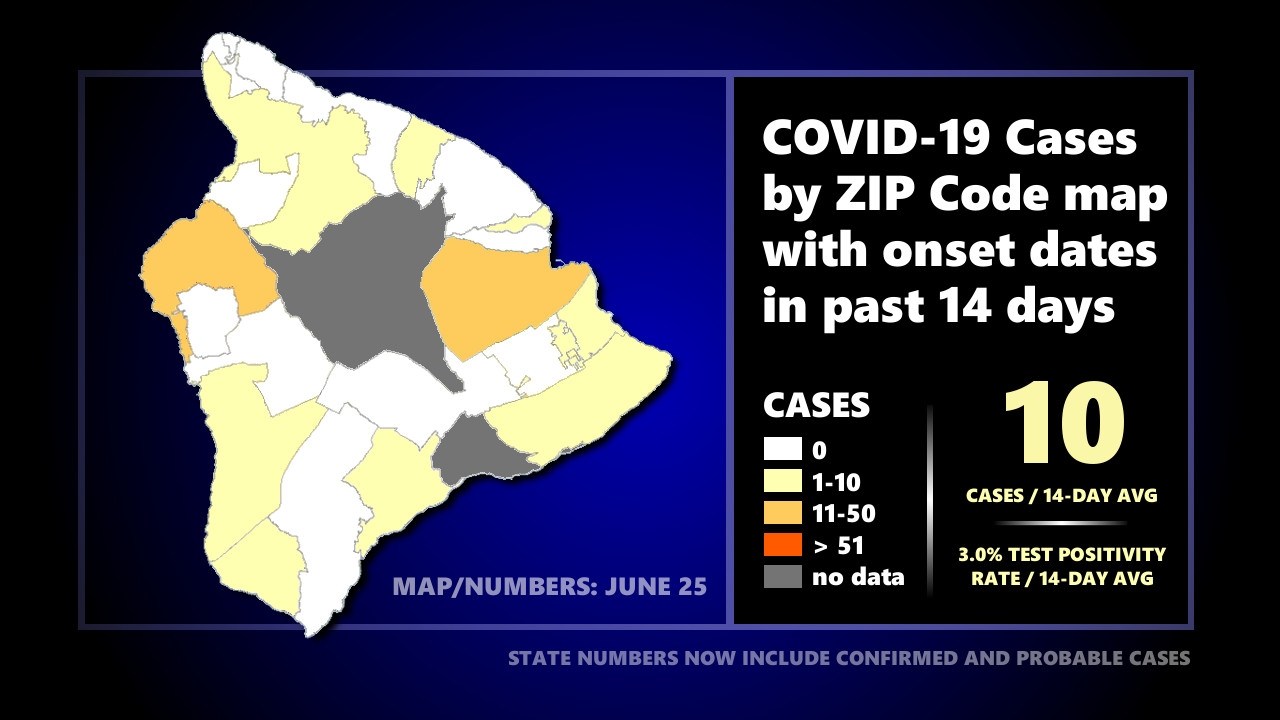 This graphic features the average number of new cases – both confirmed and probable – reported by the State of Hawaiʻi over a 14-day period, as well as the test positivity rate for the same time period. The map shows zip code areas with reported cases having onset dates in the past 14 days, according to the Hawaiʻi health department.

(BIVN) – There were 48 newly reported cases of COVID-19 in the State of Hawaiʻi on Friday. Two (2) new cases were identified on Hawaiʻi island, with four (4) persons hospitalized.

The Hawaiʻi Department of Health says there have been 145 cases of COVID-19 reported on Hawaiʻi island in the past 14 days. Hawaiʻi County has seen an average 3.0% test positivity rate over the last two weeks, with an average of ten (10) new cases per day.

On the Health Department’s zip code area map showing reported COVID-19 cases with onset dates in the past 14 days, there are two (2) locations showing over 10 cases:

The Hawaiʻi Department of Public Safety provided this update on the COIVD-19 cluster at the Hilo jail:

According to the findings of a point-in-time study conducted by the Department of Public Safety Health Care Division on June 21st, 23% of inmates at HCCC have been fully vaccinated. That is the lowest percentage of any jail or prison in the State, where the average is 54%.

“Staff are working hard to convince inmates that it is in their best interest to get vaccinated, not only for themselves, but also so they can keep their families and friends safe,” said Tommy Johnson, Deputy Director for Corrections. “PSD continues to encourage everyone to voluntarily get tested and receive the COVID vaccination. Our health care and security staff are working around the clock to mitigate spread of the virus in the facilities, and they frequently go back to inmates who have said no to see if they will reconsider, in the hopes that they will get the shot before they are released.”

The next community COVD-19 test event is scheduled for Saturday in Hilo at the Waiakea High School-upper parking lot from 8 a.m. to 11 a.m.

To date, the State of Hawaiʻi says 1,665,945 cumulative doses of COVID-19 vaccine have been administered; an increase of 3,973 from June 24th. Health officials say 57.2% percent of the State population has completed the full vaccination.

Delta Variant Detected In All Counties

The State of Hawaiʻi provided this update on the growing spread of the Delta variant in Hawaiʻi:

The Hawai‘i Department of Health’s State Laboratories Division (SLD) has detected a total of 13 cases of the SARS-CoV-2 variant B.1.617.2, also known as the Delta variant of concern. The Delta variant has been found on O‘ahu, Maui, Kaua‘i and Hawai‘i island.

“The rapid spread of the Delta variant is troubling, but not surprising,” said State Laboratories Division Administrator Dr. Edward Desmond. “Cases of this particular strain of COVID-19 have doubled every two weeks in other jurisdictions so we expected it to move quickly after it was first detected on O‘ahu earlier this month.”

The Delta variant is more transmissible than the original SARS-CoV-2 and preliminary research shows that it results in a higher rate of severe illness than other SARS-CoV-2 variants.

“Prevention is the best treatment,” said Kaua‘i District Health Officer Dr. Janet Berreman. “The vaccines provide excellent protection against the Delta variant and other COVID strains. You can protect yourself and slow the spread by getting vaccinated today.”

To date, nine cases of the Delta variant have been detected on O‘ahu, two on Maui, one on Kaua‘i and one on Hawai‘i island.

“We believe the nine cases most recently identified represent seven or eight separate introductions into the state,” said Dr. Sarah Kemble, the acting State Epidemiologist. “Unfortunately, we can expect case numbers to grow. People who are not vaccinated face a greater risk than those protected by vaccines.”