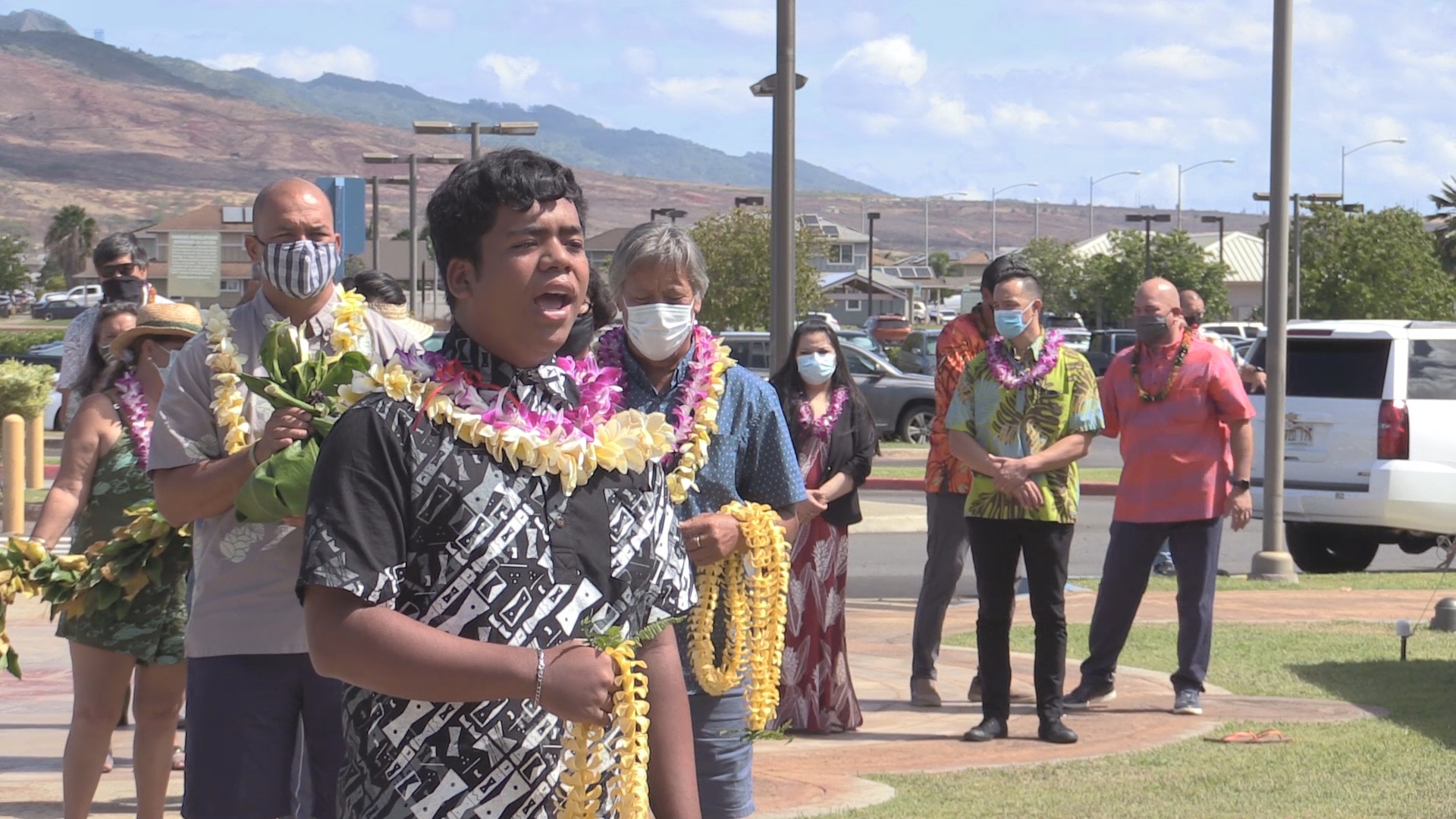 image from video by DHHL

KAPOLEI, Oʻahu - Dignitaries gathered Friday to commemorate the centennial anniversary of the signing of the Hawaiian Homes Commission Act.

(BIVN) – The centennial celebration of the Hawaiian Homes Commission Act is underway, and a ceremony was held to mark the milestone on Friday. From the Hawaiʻi Department of Hawaiian Home Lands:

Dignitaries and Homestead Association leaders gathered to commemorate the centennial anniversary of the signing of the Hawaiian Homes Commission Act (HHCA) at a ceremony held at the Department of Hawaiian Home Lands (DHHL) Hale Kalanianaʻole Office in Kapolei, Oʻahu on July 9, 2021.

The socially distanced event marked the beginning of the Act’s 100th year, having been signed into law by President Warren G. Harding on July 9, 1921. The passage of the HHCA amended the Organic Act of 1900 and set aside approximately 203,000 acres of former crown and government lands of the Hawaiian Kingdom for homesteading by Hawaiians of at least half native Hawaiian ancestry. Beneficiaries of the Act are provided a homestead parcel as a 99-year lease for $1 per year.

“Hawaiian leaders of the time knew that the indigenous population of Hawaiʻi was dying off from disease and displacement from the land. The signing of the Act represented a turning point for Native Hawaiians,” said Hawaiian Homes Commission Chair William J. Ailā, Jr. “Their efforts to pass the Hawaiian Homes Commission Act gave life to homestead communities throughout the state and from those homesteads a foundation was built for thousands of families to practice our language and culture. While there is much work that still to be done, we must rise to the task and honor the legacy that Prince Kūhiō left for us.

As a condition of statehood, the HHCA was adopted as a provision of the Hawaiʻi State Constitution with responsibility for portions of fulfilling the Act given to the State of Hawaiʻi. At the time, over 1,700 native Hawaiian families were residing on Hawaiian Home Lands and nearly 2,500 applicants were on the Waiting List.

“100 years ago, this Act set aside approximately 200,000 acres of public lands to provide direct benefits to Native Hawaiians through the provision of land. Today, we’re helping people meet their housing needs with new types of products,” said Governor David Ige “On this important anniversary, we take a moment to acknowledge his efforts and those of other Native Hawaiian leaders. They have championed for, negotiated, and enacted a unique program that continues to serve their people into the 21st century.”

As of June 30, 2021, there were over 10,000 beneficiaries with homestead leases and 28,792 native Hawaiians on the Waiting List. The Department built over 4,000 of those homestead lots in the last 25 years following several lawsuits and settlements that resulted in increased land inventory and funding for infrastructure development. DHHL was recently allocated $78 million for Capital Improvement Projects, its largest legislative budget for Capital Improvement in the history of the program. The Federal Government has also provided millions in rental, utility, and broadband assistance as part of COVID-19 recovery funding.

“Over the last 100 years, the HHCA has provided more than 10,000 homestead lots for Native Hawaiian families, returning land to its rightful owners and righting a wrong perpetrated many years ago. But we all have more work to do to fully realize Prince Kūhiō’s vision. And that’s what I’m focused on as Chairman of the Senate Committee on Indian Affairs,” said Senator Brian Schatz. “To help carry out that vision, earlier this year, we passed the American Rescue Plan, which included historic funding for Native Hawaiian programs. And last month, we introduced bipartisan legislation to reauthorize the Native American Housing Assistance and Self-Determination Act – or NAHASDA.”

DHHL intends to hold a series of events over the next 12 months highlighting the efforts of the first Hawaiian Homes Commission and the early homesteaders whose success allowed the program to become fully instituted.

For more information about the centennial, visit dhhl.hawaii.gov/hhca100.