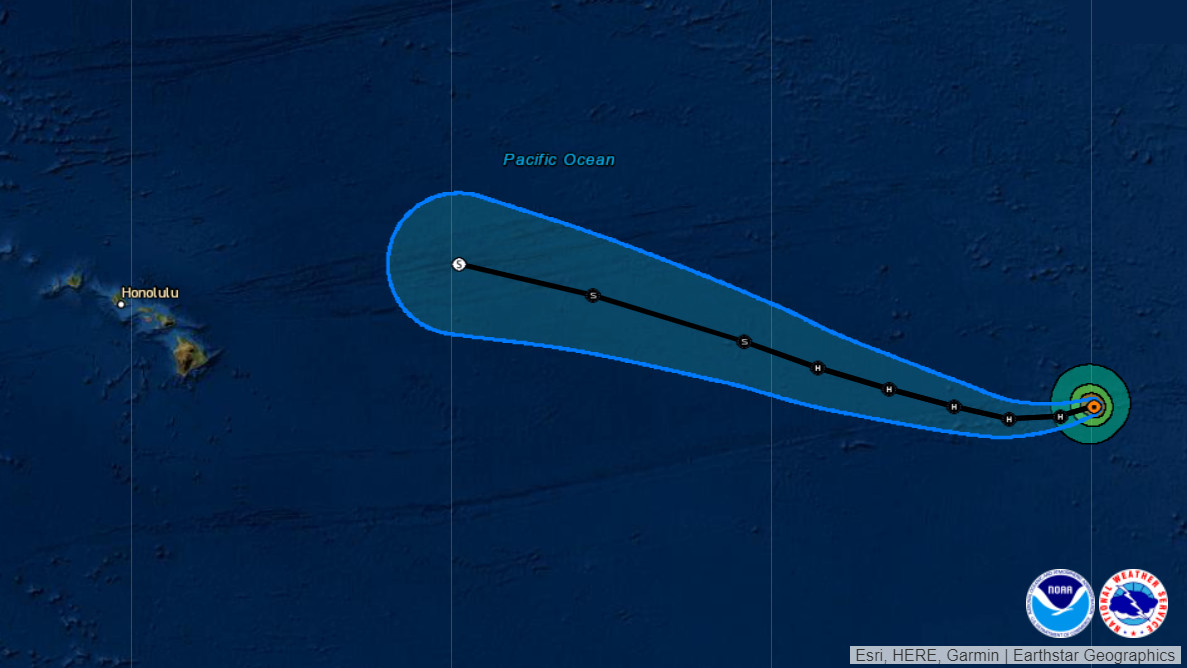 Image from interactive NOAA/NWS map showing the location and forecasted track of Hurricane Linda in relation to Hawaiʻi.

HAWAIʻI ISLAND - Hurricane Linda is expected to weaken to a tropical storm as it enters the Central Pacific later this week. 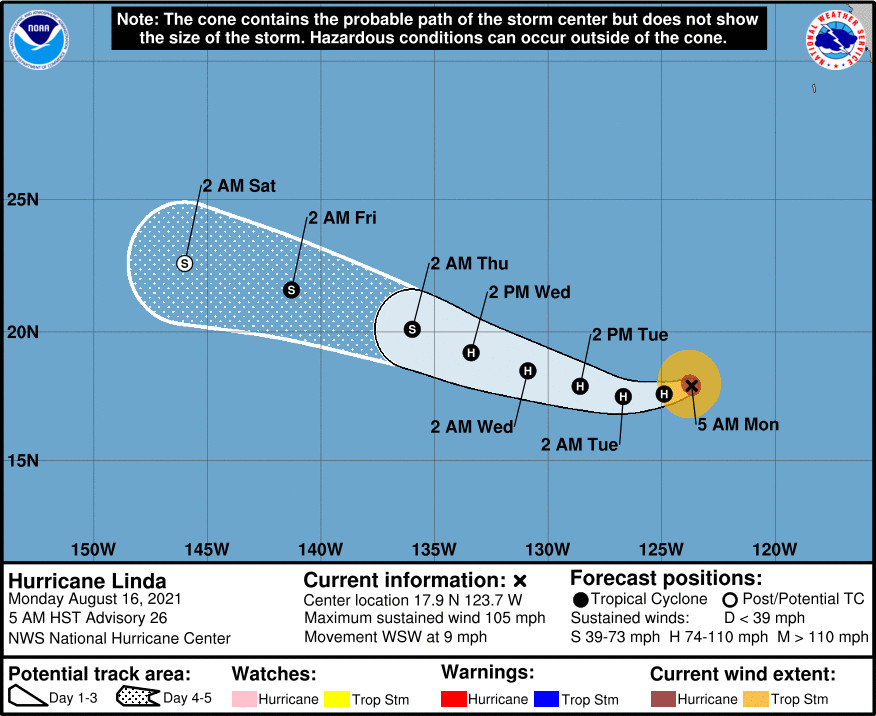 (BIVN) – The eye of Hurricane Linda was 2,050 miles east of Hilo as of this morning, and the storm was maintaining its intensity as it moved toward the west-southwest near 9 mph.

Forecasts indicate that Linda could “move into the Central Pacific Hurricane Center’s area of responsibility as a weakening tropical storm as early as late Thursday.”

“Maximum sustained winds remain near 105 mph (165 km/h) with higher gusts,” the National Hurricane Center reported on Monday morning. “Only gradual weakening is forecast during the next few days, and Linda is expected to maintain hurricane strength through Wednesday.”

As of now, Hurricane Linda is not expected to pose a threat to Hawaiʻi. The National Weather Service says there could be an affect on the locally breezy trade winds, “with the trades possibly decreasing again by Sunday as the remnants of tropical cyclone Linda disrupt the gradient across the island chain.” On the water, “swell within the captured fetch from Hurricane Linda in the East Pacific might make it to the east facing shores of the eastern most islands as small, long period east swell by Wednesday.”

There has been little notable change in Linda’s structure on satellite imagery. The hurricane continues to possess annular characteristics, with a well-defined warm eye up to +15 C surrounded by a ring of -60 to -65 C cloud top temperatures associated with the eyewall. The eyewall was also well-defined on a recent 1003 UTC AMSR-2 microwave pass. The most recent subjective Dvorak classifications from SAB and TAFB were T5.5/102 kt and T5.0/90 kt, while the latest UW-CIMSSADT estimate was T5.1/92 kt. Thus, Linda is being maintained as a 90-kt hurricane for this advisory, though this might be a bit on the conservative side.

The initial motion estimate continues off to the west-southeast, at 255/8 kt. The most recent track forecast is mostly just an update of the previous one. Linda is expected to gradually make a rightward turn from the west-southwest to the west-northwest as a strong mid-level ridge to the north shifts its orientation. The latest NHC track forecast remains is good agreement with the track consensus guidance, blending the TVCN and HCCA aids.

Linda remains in a very low wind shear environment, with SHIPS guidance diagnosing less than 5-kt of shear over the hurricane currently. Even though sea-surface temperatures remain only marginally warm along the Linda’s forecast track, its continued annular structure argues for only very gradual weakening over the next 48 hours. Afterwards, Linda will cross over the 26 C isotherm into cooler waters, and a faster rate of weakening is anticipated after that time. The latest NHC intensity forecast over the first couple of days remains higher than the majority of the model guidance, and is closest to the ECMWF forecast. After Linda begins to move over cooler waters in 60 h, the intensity forecast is brought back down towards the intensity consensus. At the end of the forecast period, Linda is expected to become a post-tropical gale once deep organized convection ceases, as suggested by the GFS and ECMWF simulated brightness temperature at that time frame.