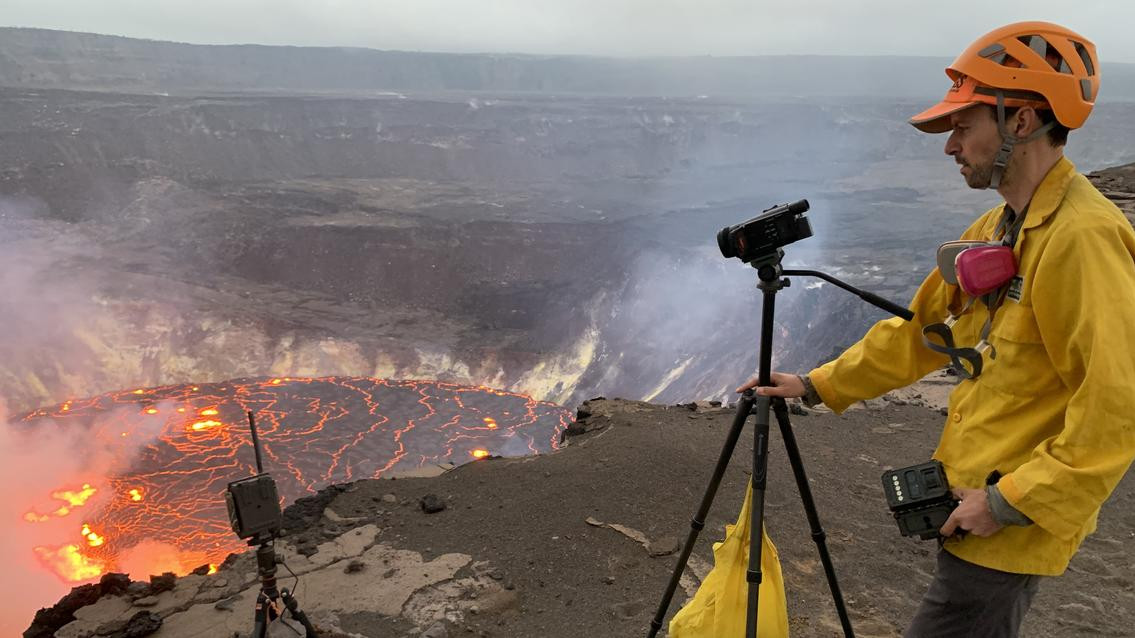 USGS: "A USGS Hawaiian Volcano Observatory geologist takes video of the eruption that started within Halema'uma'u crater, Kīlauea summit, at about 3:20 p.m. on September 29, 2021. Scientists continue to monitor the eruption and hazards from within an area of Hawai'i Volcanoes National Park that remains closed to the public due to safety reasons." (USGS photo taken from the south rim of Halema'uma'u by D. Downs.)

HAWAIʻI VOLCANOES NATIONAL PARK - A field crews, equipped with specialized safety gear, is monitoring the eruption from within the closed area of Hawai‘i Volcanoes National Park.

Kīlauea volcano is erupting. Following a sudden increase in earthquake activity and an increase in the USGS Volcanic Alert Level from ADVISORY to WATCH this afternoon, lava is now filling the Halemaʻumaʻu summit crater once again. The alert level has been raised to WARNING. A synthesized voice was utilized in the narration for this story.

(BIVN) – Scientists with the USGS Hawaiian Volcano Observatory are capturing the new eruption of Kilauea, and sharing the photos online.

The summit eruption began on Wednesday afternoon. Animated thermal webcam images taken between 2:45 p.m. and 5:45 p.m. recorded the start of the eruption. Vigorous lava fountains formed in the middle part of the solidified lava lake at Halemaʻumaʻu crater, filling the floor with new molten lava. 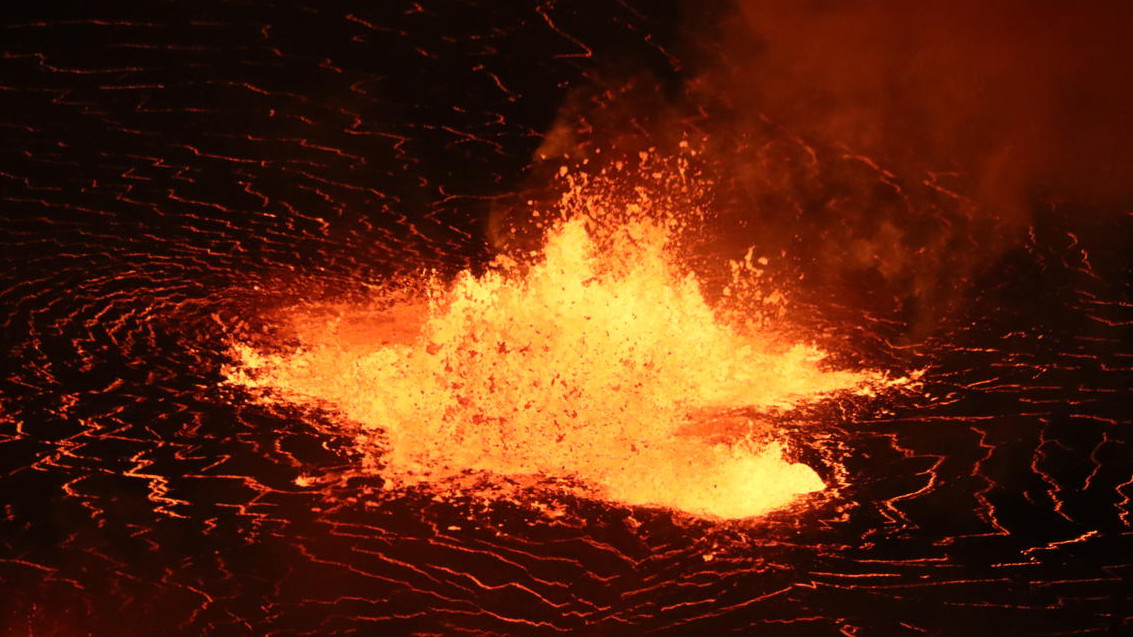 USGS: “A telephoto image of one of the low lava fountains near the center of the growing Halema’uma’u lava lake.” (USGS photo by M. Patrick.)

By 4:43 p.m., vents had opened on the west wall of the crater. Telephoto images taken by scientists show the vent area and lava fountain through volcanic gas. By 5:09 p.m., the west wall vents had grown. 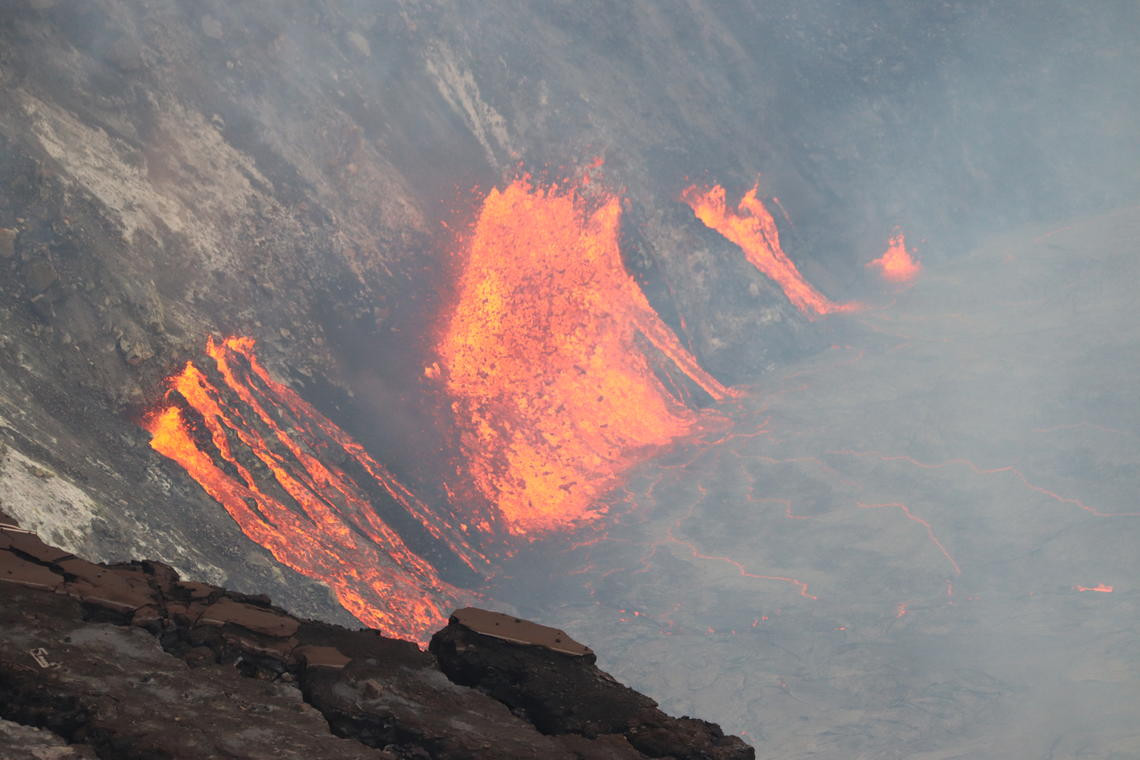 USGS: “A telephoto image of fissures that opened on the western wall of Halema’uma’u crater during the ongoing eruption that began yesterday, September 29, at approximately 3:21 p.m. HST. Lava from multiple fissures continues to slowly raise the level of the new active lava lake at the summit of Kīlauea.” (USGS image by M. Patrick.)

The new eruption is already generating a vigorous plume of volcanic gas. Sulfur dioxide interacts in the atmosphere with oxygen, moisture, dust, and sunlight to eventually form the volcanic smog – known in Hawaii as vog – which can be transported downwind.

The USGS published this map, showing the location of the new fissures at the summit. 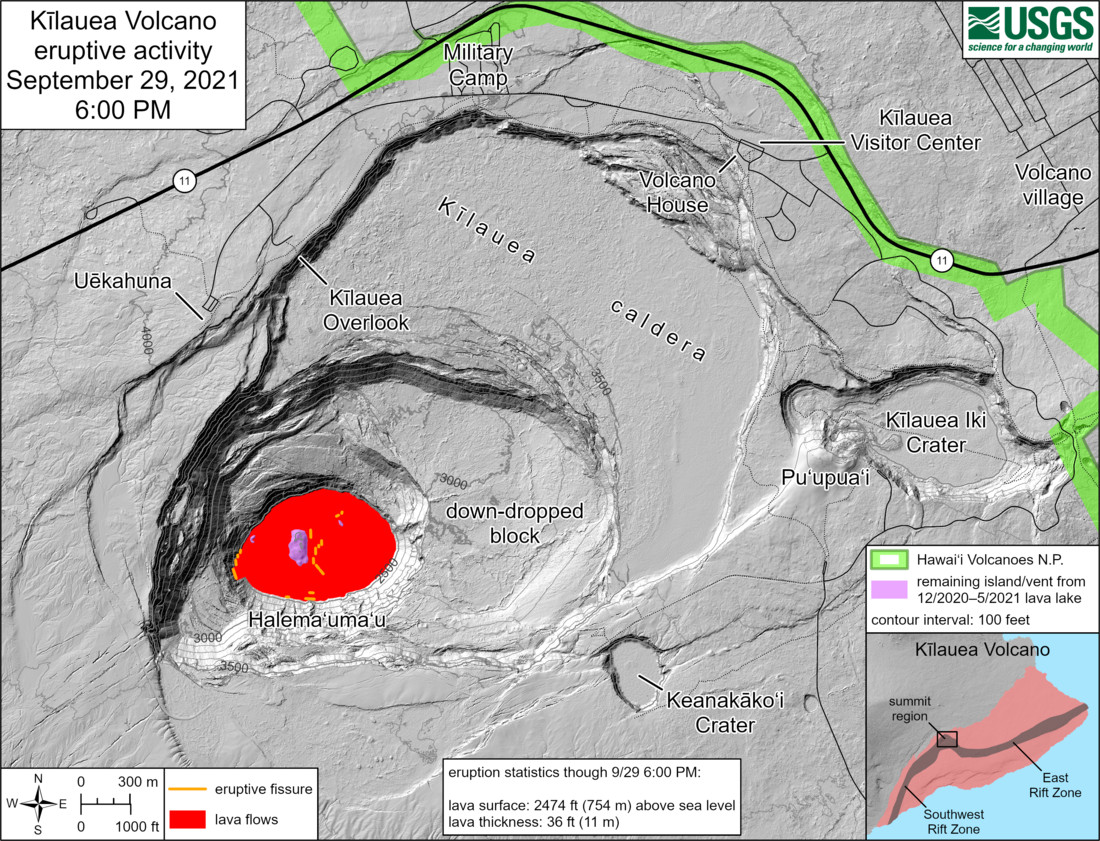 USGS: “This reference map depicts the ongoing Kīlauea summit eruption as of approximately 6:00 PM on September 29, 2021. Several new fissures (orange lines) within Halema‘uma‘u have erupted enough lava (red) to cover nearly all of the 12/2021–5/2021 lava lake by more than 36 ft (11 m). From that lava lake, only the peaks of the two largest islands and the west vent (shaded purple) remain exposed at this time. Note that this map depicts contour elevations in feet, with the surface of the new lava lake now at approximately 2474 ft (754 m) above sea level.”

With the new eruption comes a new Special Weather Statement from the National Weather Service in Honolulu:

Areas of volcanic glass or Pele`s hair have been observed near the Halemaumau summit this evening, as reported by several pilots in the vicinity. The Pele`s hair will remain possible in the immediate area around the Halemaumau crater during eruptions throughout the night. Residents and visitors are urged to minimize exposure to volcanic emissions. Those with respiratory sensitivities should take extra precaution to minimize exposure.