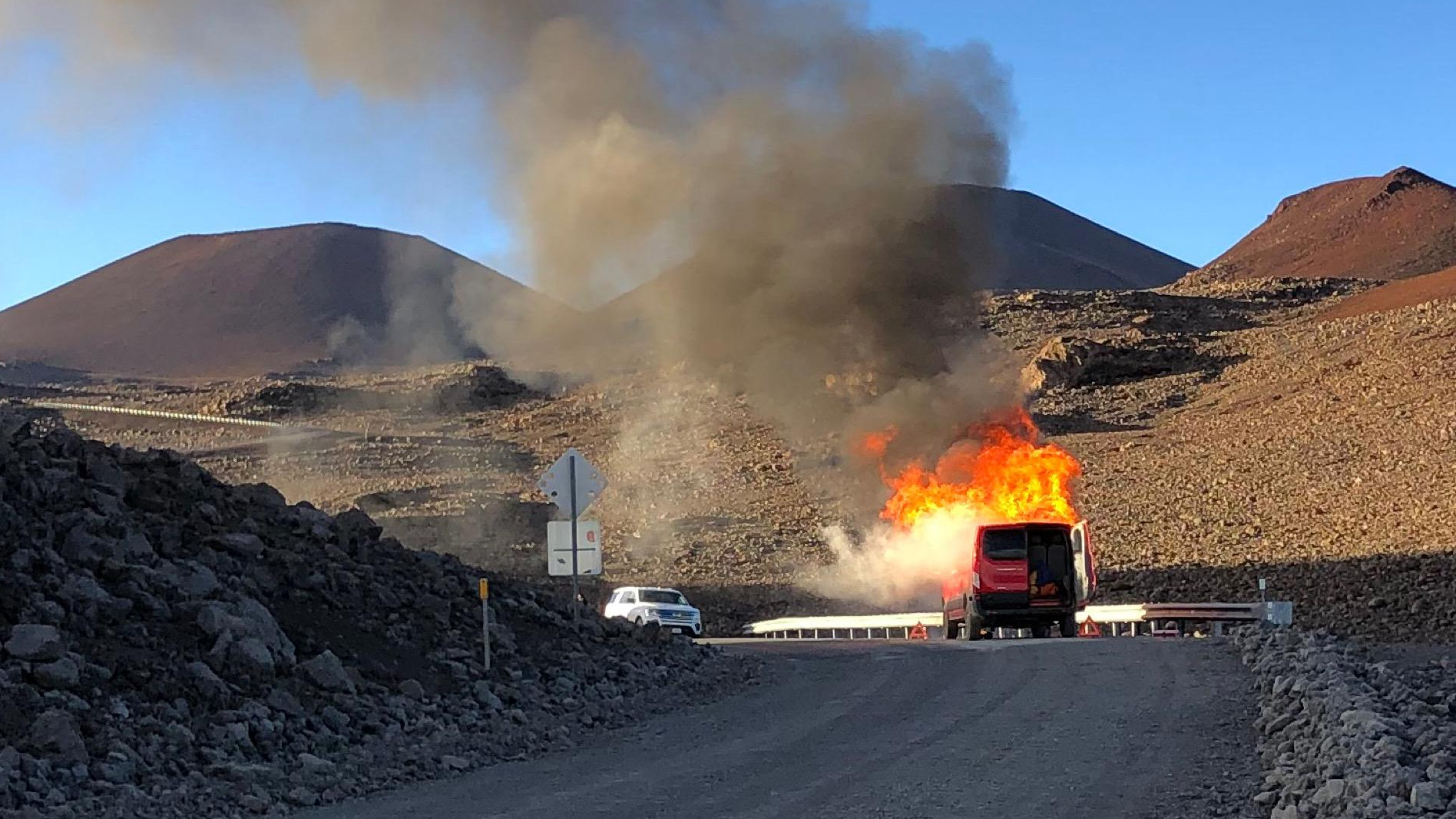 photo of the van fire courtesy the University of Hawaiʻi

MAUNAKEA, Hawaiʻi - There were no injuries reported in the tour van fire that occurred about halfway up Maunakea Access Road on Tuesday, November 9. 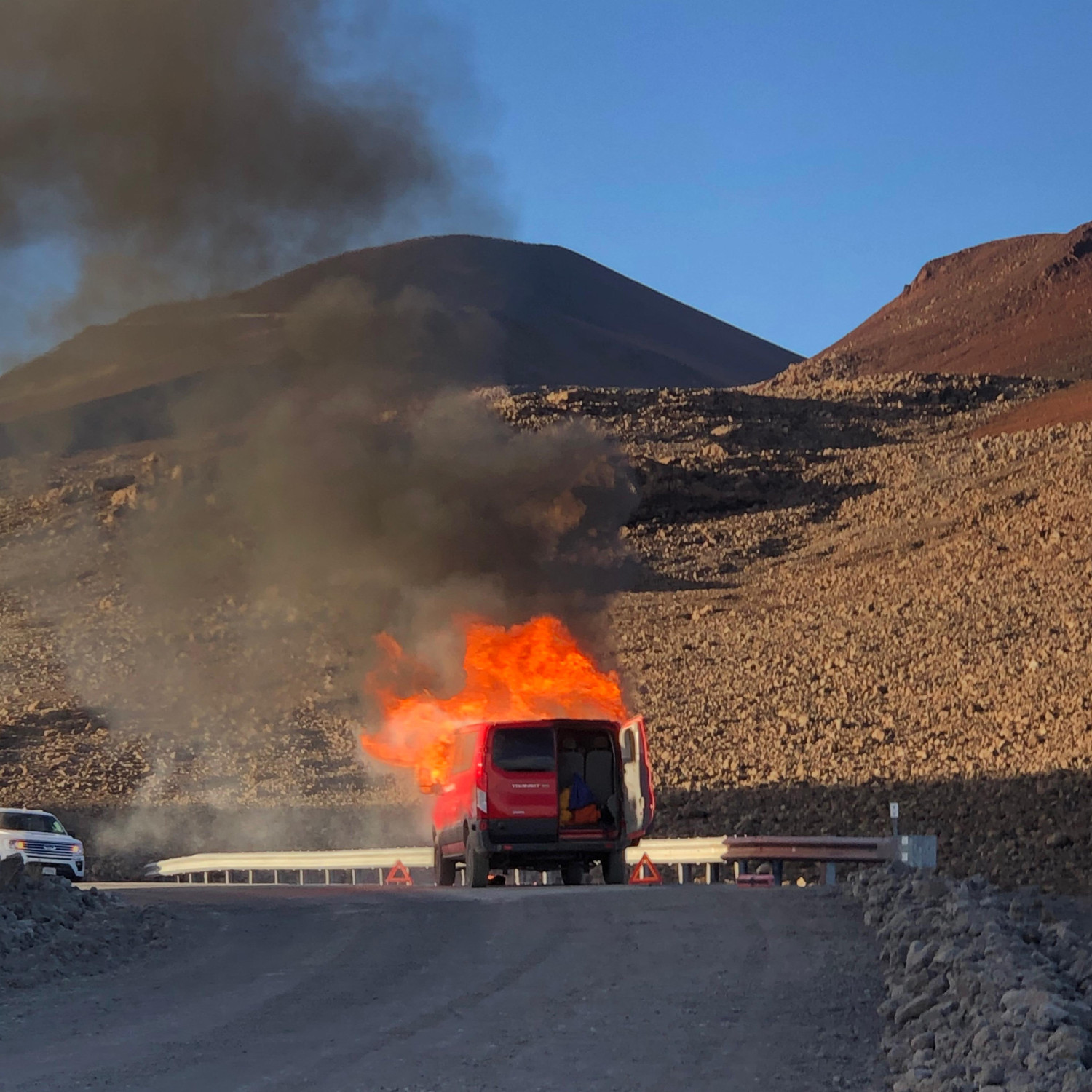 photo of the van fire courtesy the University of Hawaiʻi

(BIVN) – A tour van fire burst into flames about halfway up Maunakea Access Road on Tuesday, November 9, near the 13,803-foot summit of the mountain.

“The vehicle was engulfed in flames when the rangers arrived after the driver quickly evacuated the eight passengers after smelling smoke,” reported the University of Hawaiʻi. “Rangers said the swift action by the driver likely prevented injuries and saved lives as fire burns more rapidly at higher elevations.”

The Maunakea Rangers were the first emergency personnel to arrive, about 5 minutes after the first report. “When we arrived on scene, explosions were coming from the vehicle, and our priority was to keep everyone away from harm and make sure that emergency response was called,” said Maunakea Ranger Oscar Pouoa.

“With the assistance of Maunakea Observatory staff, they secured the scene and transported the passengers to the Halepōhaku mid-level facility,” a UH news release stated. “A federal fire crew from the Pōhakuloa Training Area Fire, based 12 miles away, arrived 30 minutes later and extinguished the flames. The fire completely destroyed the van, and no other damage was reported in the area.” 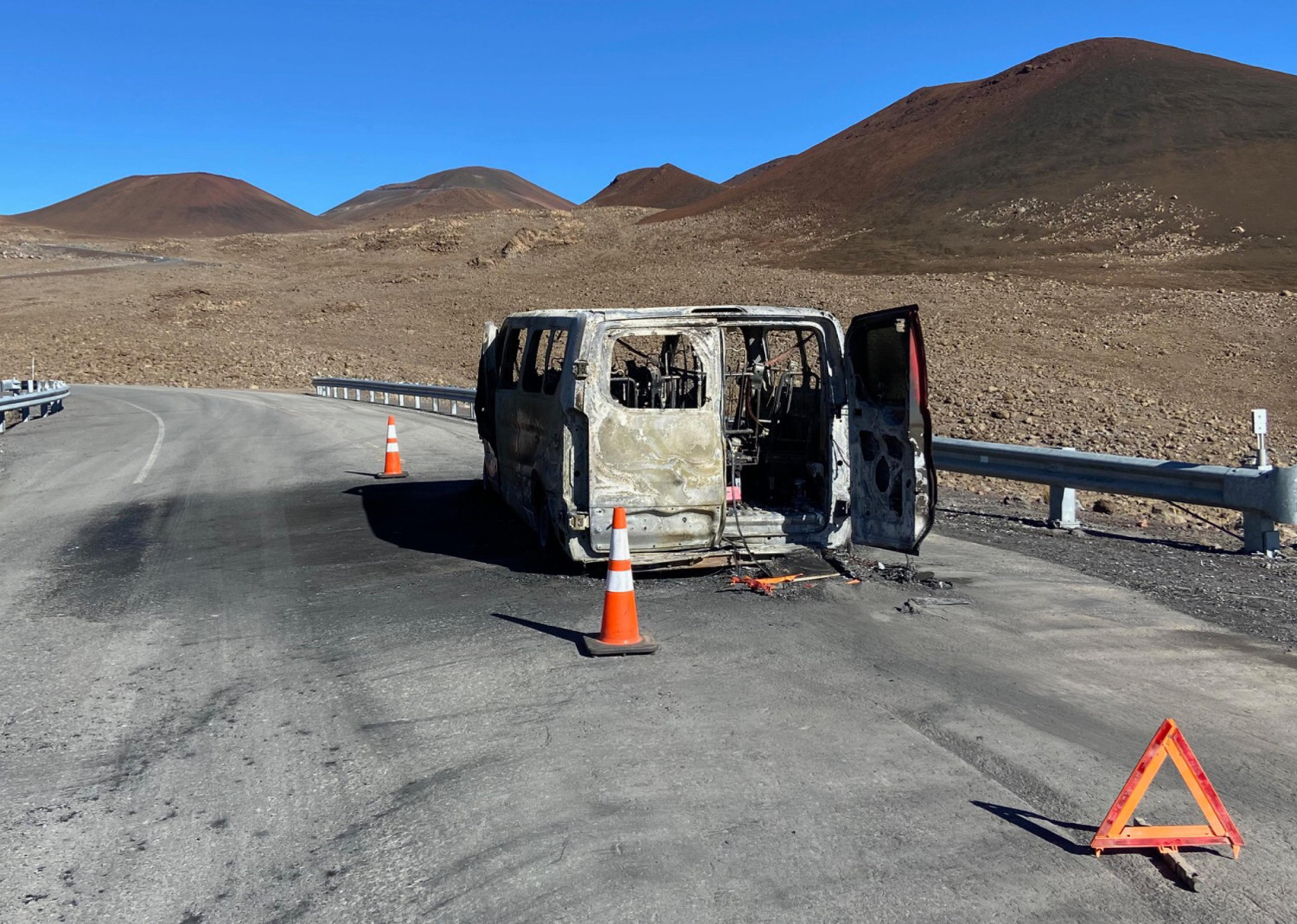 photo of the burned van courtesy the University of Hawaiʻi

“This is an important reminder that the mauna can be as dangerous as it is awe inspiring,” said UH Hilo Center for Maunakea Stewardship executive director Greg Chun. “It’s isolated, we can experience extreme temperatures and conditions, and fire burns faster on the summit. That’s why our rangers are a key part of the Center of Maunakea Stewardship, where we also work hard to build relationships with multiple agencies to ensure coordination when responding to emergencies like this one.”

UH officials are encouraging visitors to the mountain to be safe and respectful, especially as the winter season is approaching, with “anticipated summit traffic typical after a heavy snowfall.”

“Please be respectful of the fact that Maunakea is one of the most revered places in Hawaiʻi, and many visit the mauna for cultural and religious practices,” the university stated. “For everyone’s safety, please heed all directions and precautions from Maunakea Rangers.”