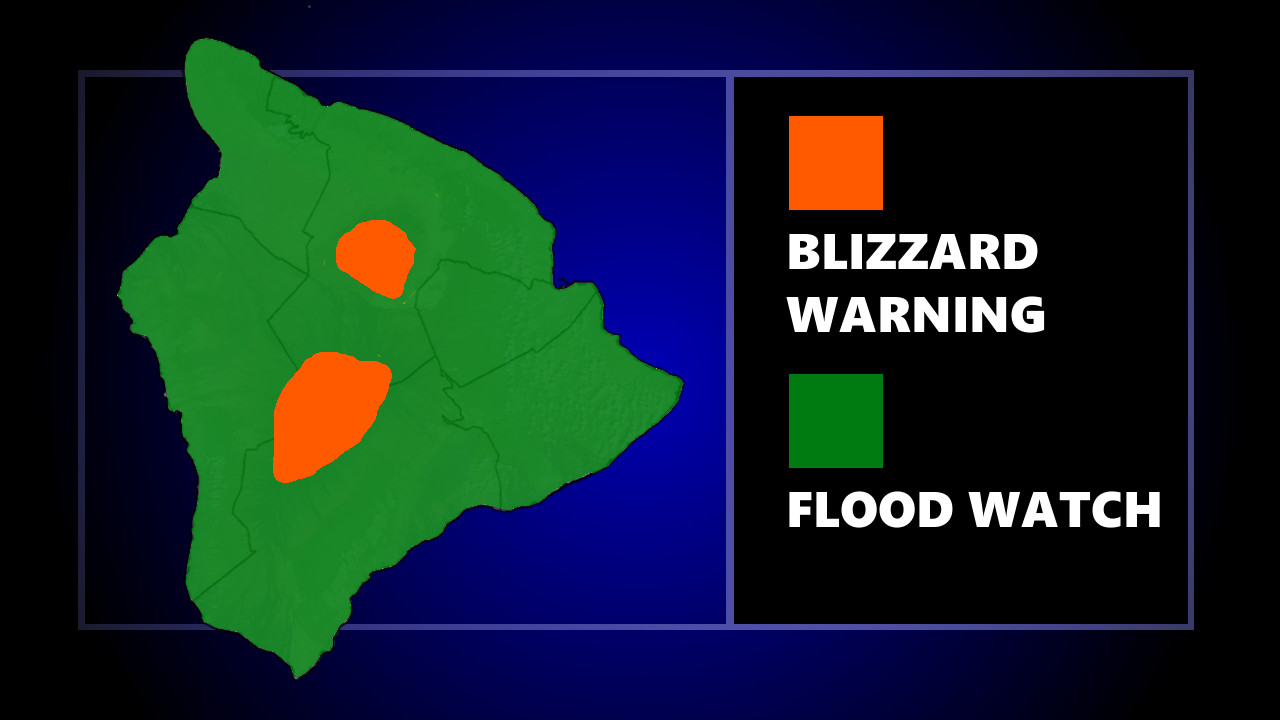 (BIVN) – The National Weather Service in Honolulu has issued a number of severe weather advisories for the State of Hawaiʻi, including a rare Blizzard Warning for the summits of Maunakea and Mauna Loa.

Forecasters say a “prolonged period of heavy rainfall is anticipated as a slow-moving Kona low develops west of Kauai, and moisture associated with a front stalls over the islands.”

“In the short term, the stalling front will bring the greatest potential for heavy rain over Maui and the Big Island,” the National Weather Service stated, as it issued a Flood Watch for the entire State. “As the low forms west of Kauai on Saturday, moisture associated with the front will gradually spread back toward Oahu and Kauai County. This will bring the threat of heavy rainfall to all islands well into next week.”

“Roads in several areas may be closed, along with property damage in urban or low lying spots due to runoff,” the Flood Watch warned. “Isolated highways, such as the Belt Highway in the Big Island’s Kaʻū District, and Piilani Highway on Maui, may be closed in one or more locations, resulting in long detours or even the isolation of communities. Landslides may also occur in areas with steep terrain.”

Predicted high winds and heavy snow for the summits have also triggered a Blizzard Warning for Maunakea and Mauna Loa.

“Total snow accumulations of up to 12 inches or more. Winds gusting over 100 mph,” the National Weather Service said. “Travel could be very difficult to impossible. Blowing snow will significantly reduce visibility at times, with periods of zero visibility.”

Forecasters also issued a Marine Weather Statement, saying: “A large north-northwest swell will build through Saturday and is expected to produce moderate to strong surges in north facing harbors, especially Kahului on Maui and Hilo on the Big Island. In addition, large breaking waves and strong currents may impact harbor entrances and channels. The swell will turn more northerly Sunday, then slowly decline through the first part of next week.”

Due to the Flood Watch, the Hawaiʻi County Civil Defense reported the following:

You will be informed of changes in conditions that may affect your safety, emergency officials said.