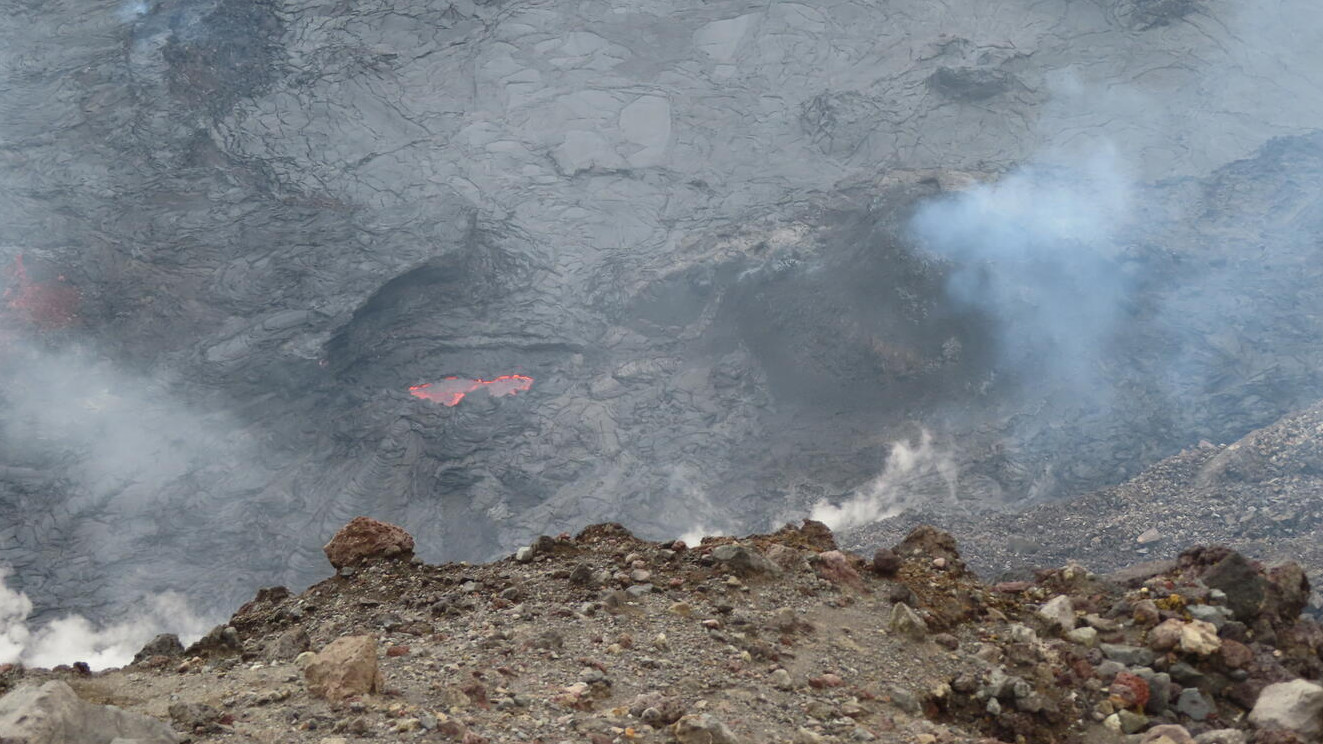 USGS: "On the afternoon of December 27, 2021, the summit eruption of Kīlauea was paused and showed only intermittent and weak crustal foundering in the formerly active west side of the lava lake in Halema‘uma‘u. This photo, looking down and toward the east, shows the topography of the formerly active pond of lava during the eruption pause. The pond surface is approximately 12 meters (39 feet) lower than the high ledges surrounding it." (USGS photo by K. Lynn)

HAWAIʻI VOLCANOES NATIONAL PARK - Scientists said on Thursday morning the recovery of tilt suggests the eruption will restart within the next 6-12 hours.

(BIVN) – After slowing activity was noted by scientists on Wednesday, the summit eruption of Kīlauea Volcano within Halemaʻumaʻu crater is now paused, as of Thursday morning.

There are no indications of activity migrating elsewhere on Kīlauea, and no unusual activity has been noted in the Kīlauea East Rift Zone, the USGS Hawaiian Volcano Observatory says.

“Similar pauses in recent weeks have ranged in duration from 1 to 3 days, but recovery of tilt suggests the eruption will restart within the next 6-12 hours,” stated the USGS update posted on Thursday morning.

“Summit tiltmeters have been showing inflationary signals since 8 PM last night and has reversed, and exceeded, the deflation caused by the pause,” HVO scientists wrote. “However, volcanic tremor associated with the eruption—as recorded by nearby seismometers—has not restarted yet.”

Lava has ceased erupting from the western vent within Halemaʻumaʻu crater. The surface of the lava lake mostly crusted over yesterday afternoon but experienced a crustal overturn and new crust formation around 8 PM to 11 PM last night. There has also been occasional minor activity at the vent on the north side of the spatter cone this morning. The lake has seen a total rise of about 70 meters (230 feet) since lava emerged on September 29. Measurements from a helicopter overflight on December 21 indicated that the total lava volume effused since the beginning of the eruption was approximately 38 million cubic meters (10.0 billion gallons) at that time.