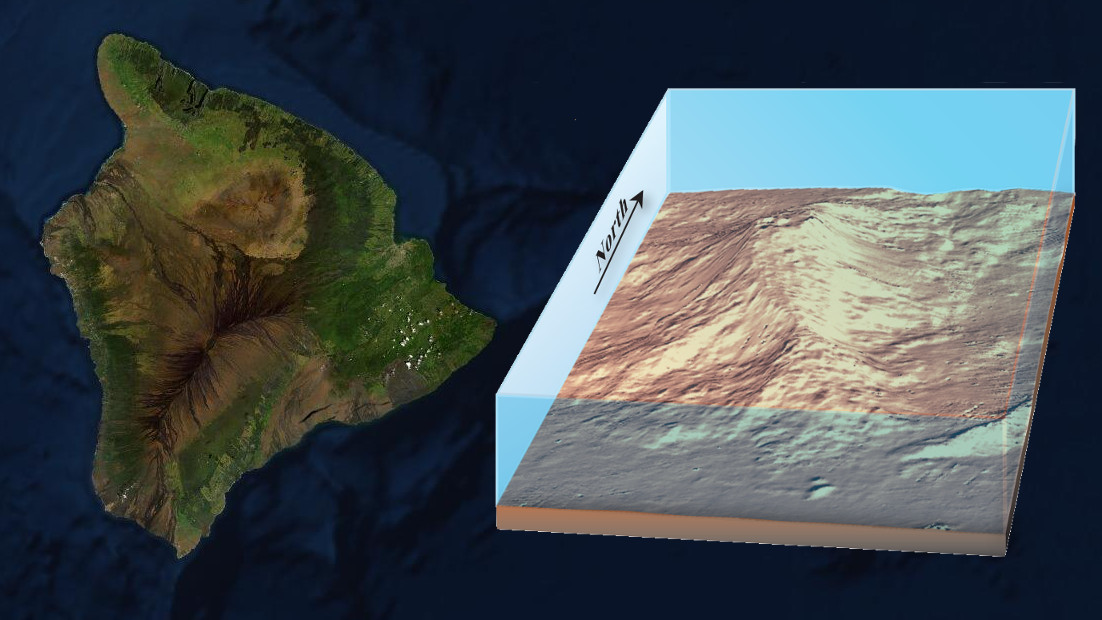 HAWAIʻI - The USGS Hawaiian Volcano Observatory explains how and why the name Lōʻihi was changed to Kamaʻehuakanaloa. 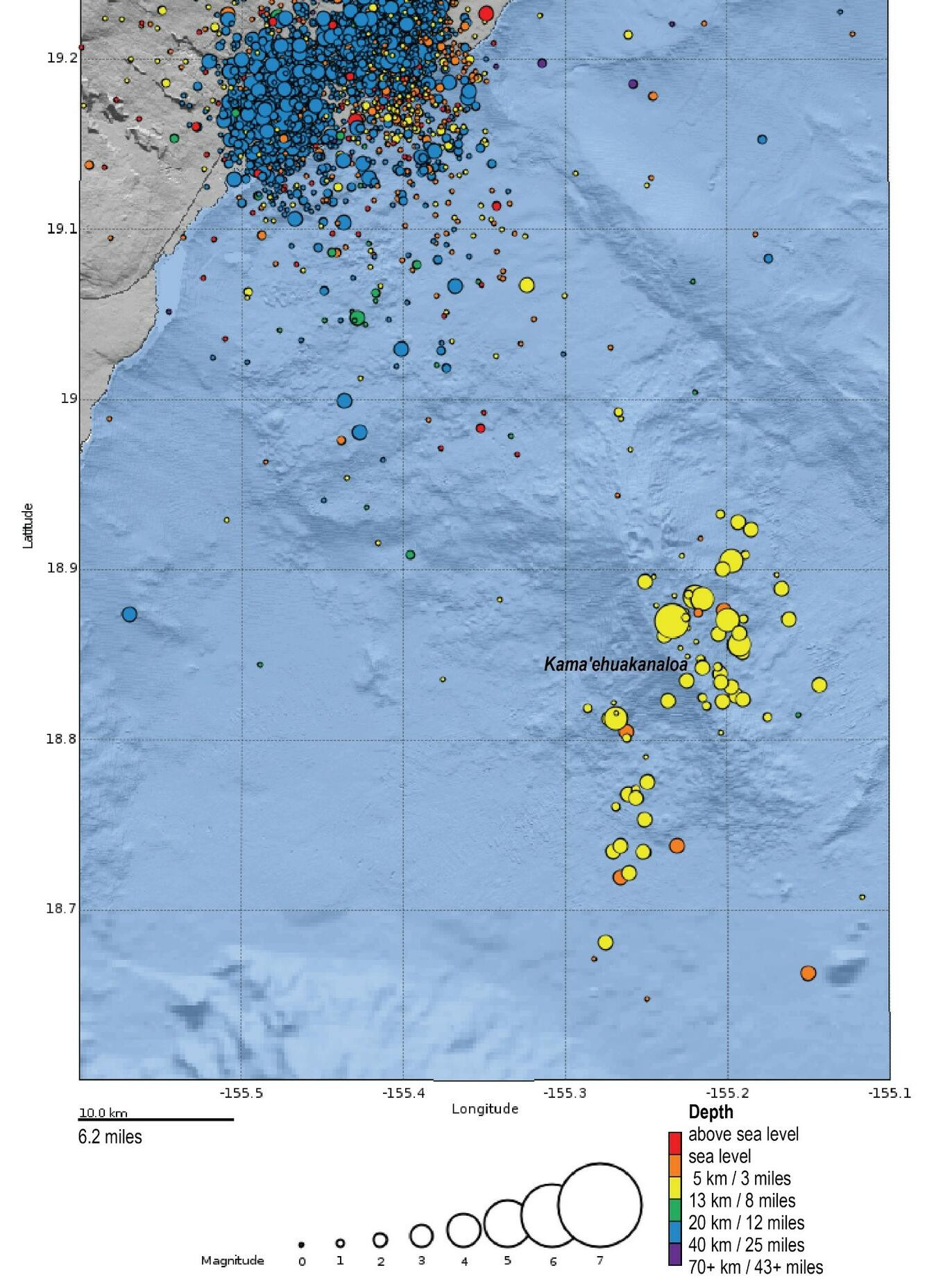 USGS: “Earthquakes detected by HVO’s seismic network in December 2021, with the size of the circles corresponding the earthquake magnitude and the color corresponding to the earthquake depth. The cluster of mostly blue earthquakes are from a persistent swarm about 30 km (19 miles) underneath Pāhala. Kamaʻehuakanaloa’s earthquake swarm was mostly 5–13 km (3–8 miles; yellow) below sea level, with a few shallower events.” (USGS map)

(BIVN) – In a new article, U.S. Geological Survey scientists detail the recently updated name for the undersea volcano to the south of Hawaiʻi island: Kamaʻehuakanaloa.

Kamaʻehuakanaloa volcano may seem unfamiliar, perhaps because its name was recently updated: in July 2021, Lōʻihi Seamount was renamed Kamaʻehuakanaloa by the Hawaii Board on Geographic Names.

This last volcano may seem unfamiliar, perhaps because its name was recently updated: in July 2021, Lōʻihi Seamount was renamed Kamaʻehuakanaloa by the Hawaii Board on Geographic Names.

The former name was introduced in 1955 by Dr. Kenneth O. Emery, following a 4-day bathymetric (sea-floor topography) survey in 1954 off the south coast of the Island of Hawai’i. The survey was done at the request of the Office of Naval Research and five seamounts were identified.

Dr. Emery, a professor at the University of Southern California, asked Mary Kawena Pukui and Martha Hohu (both Bishop Museum staff), and Dr. Gordon A. Macdonald (HVO Director) to name the seamounts. They selected names based on a short physical description. For the seamount located about 30 miles (19 km) south of the Kīlauea coastline and rising to 3,189 ft (975 m) below sea level, the name Lōʻihi was assigned, meaning long; indeed, this seamount is longer than its neighbors. 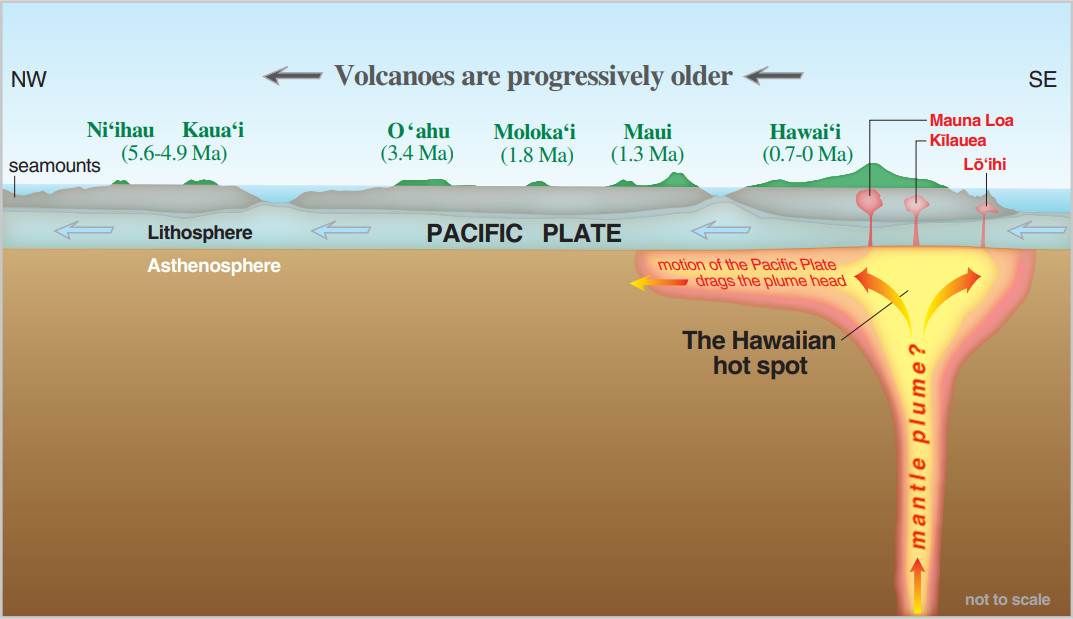 USGS image from previously published General Information Product 135: “A highly simplified cross-section view along the Hawaiian Island chain showing the inferred mantle plume that has fed the Hawaiian “hot spot” on the overriding Pacific tectonic plate. The geologic ages of the oldest volcano on each island (Ma = millions of years ago) are progressively older to the northwest, consistent with the hot-spot model for the origin of the island chain.” (Modified from “This Dynamic Planet,” see online resources.)

At the time, Dr. Emery speculated that:

“There is a high degree of probability that the seamounts are of volcanic origin, and correspondingly that the differences which exist may be indications of the nature of the early stages of a volcano forming well below sea level. If this conclusion is correct then the two shallowest seamounts (Papa’u and Loihi) must be considered parasitic (in the sense of topography not activity) volcanoes on the flank of Kilauea…”

In other words, Dr. Emery interpreted “Loihi” to be a volcanic cone erupted by Kīlauea. However, the seamount was recognized to be an active submarine volcano, and the youngest volcano in the long line of the Hawaiian-Emperor chain, because of earthquake swarms in the 1970s. Kamaʻehuakanaloa’s most recent eruption is thought to have been in 1996, when HVO detected 4,377 earthquakes between mid-July and mid-August. Recent oceanographic surveys have also determined that Papa’u is an uplifted fault block on the margin of the Hilina slump, not a volcano.

Kamaʻehuakanaloa’s previous name was descriptive but failed to reflect Hawaiian cultural knowledge. Several mele (chants), orally passed down and documented in writing decades before the 1954 expedition, describe Kamaʻehuakanaloa, an undersea volcano. As explained by Kuʻulei Kanahele of the Edith Kanakaʻole Foundation, Kamaʻehuakanaloa “is a powerful name that invokes the name of Pelehonuamea and her birth out of Kanaloa [the ocean].” The new name was unanimously adopted in July 2021 by the Hawaii Board on Geographic Names.

It will be millennia before Kamaʻehuakanaloa emerges from Moananuiākea (the Pacific Ocean). The volcano does make its presence known with earthquakes that are occasionally felt on Island of Hawai’i, though.

Most recently, just before Christmas in the early morning of December 24th, 2021, a magnitude 4.9 earthquake under Kamaʻehuakanaloa caused weak to light shaking felt by at least 29 people from Nāʻālehu to as far north as Kailua Kona and Honomū. In the 2 weeks leading up to this earthquake, over 50 smaller earthquakes had been detected by HVO’s earthquake-monitoring network.

Kamaʻehuakanaloa may be out of sight, but it is not out of mind. It is honored in mele and though it remains under the ocean surface, it continues to occasionally remind us of its presence with earthquakes we can feel on land. In thousands of generations, perhaps our descendants will witness Kamaʻehuakanaloa, the “reddish child of Kanaloa,” finally emerging and forming a new island.