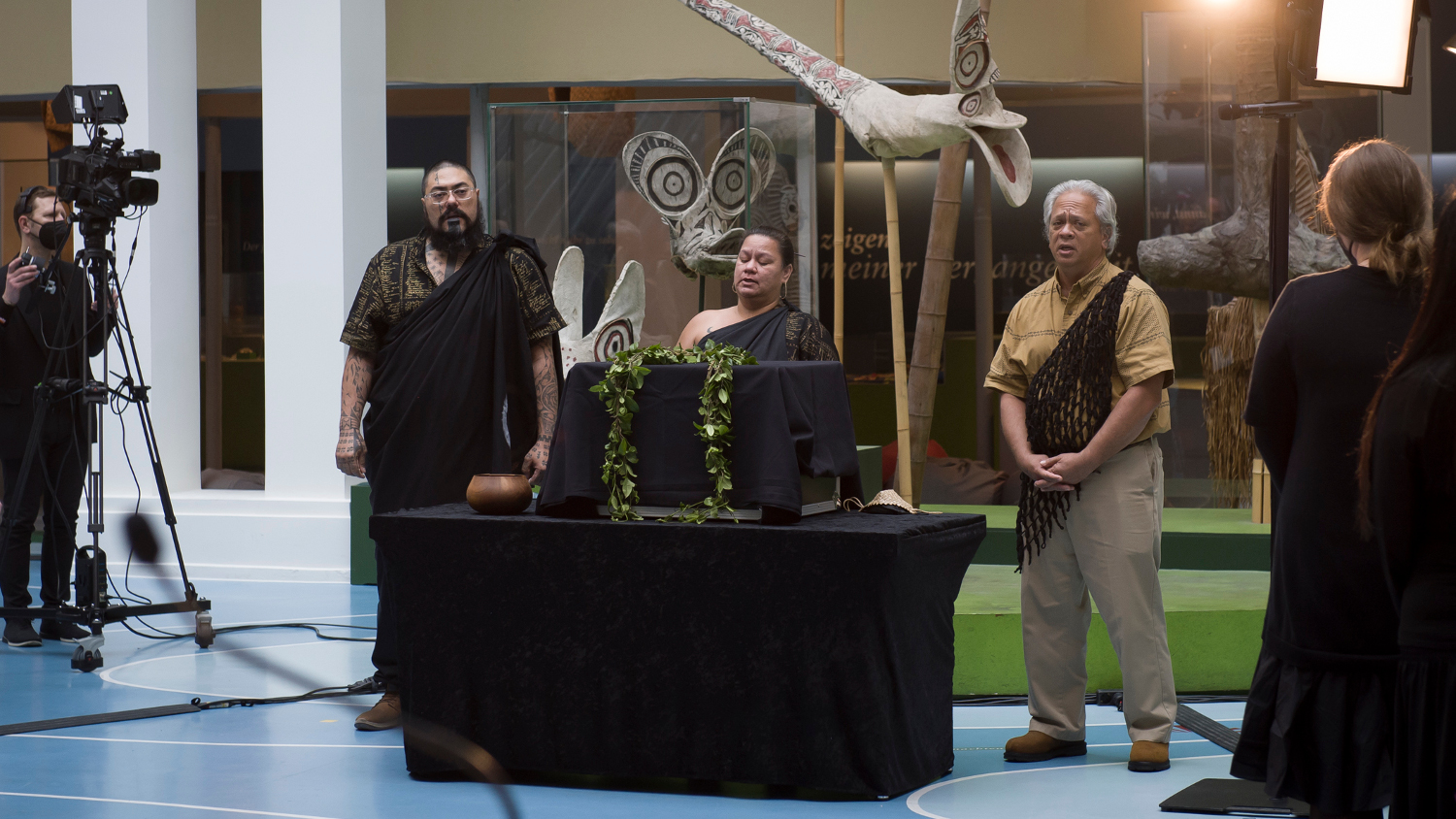 BREMEN, Germany - Ancestral remains from collections held in the Übersee-Museum Bremen have been returned to representatives of the Office of Hawaiian Affairs. 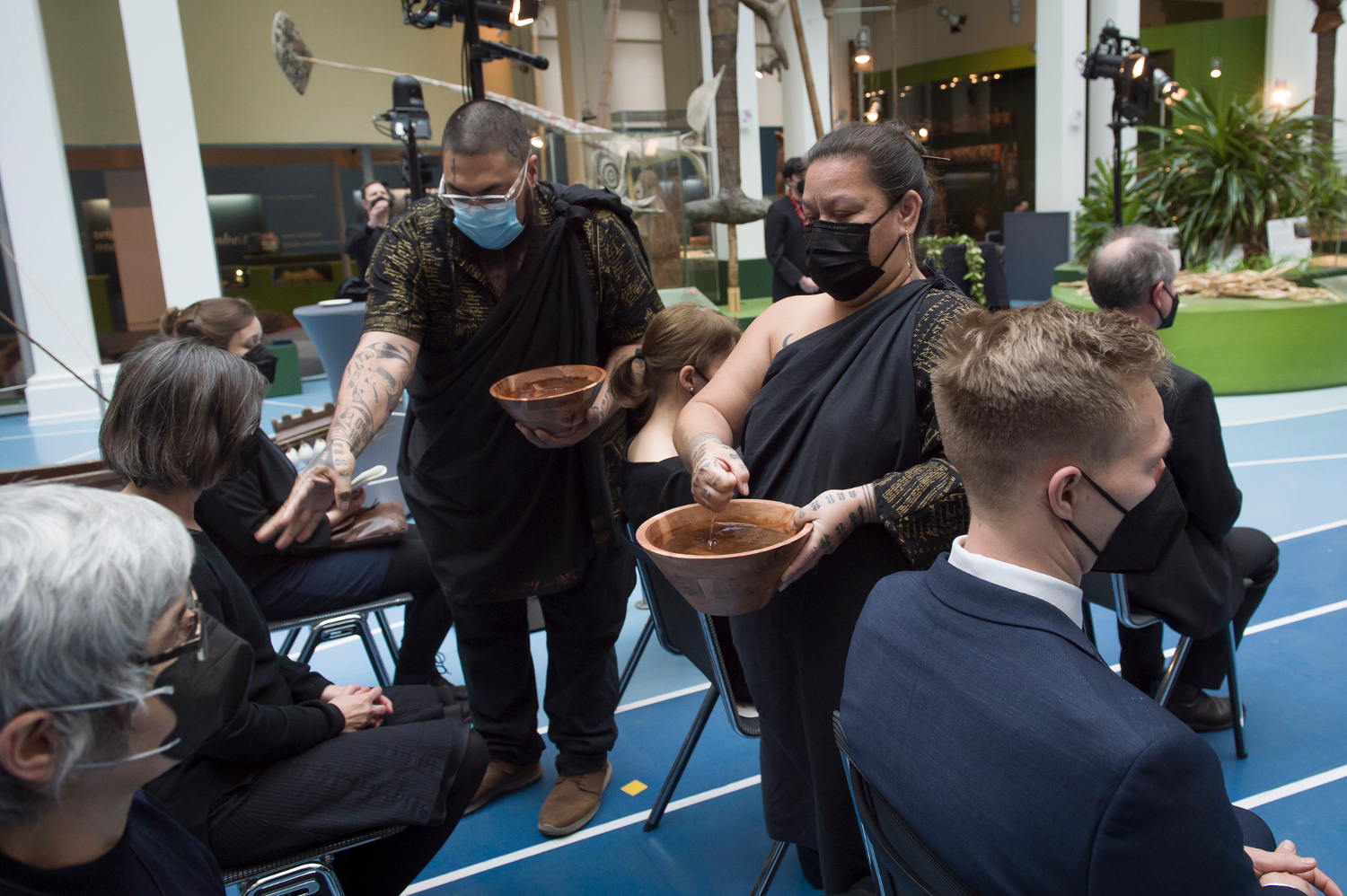 OHA PHOTO: “Mana Caceres and Kalehua Caceres during a cleansing ritual at the end of the ceremony. Those who are present are sprinkled with salt water to symbolically cleanse them from the uncleanliness that is naturally linked to the dead, so that the iwi kūpuna can return to their families.”

(BIVN) – Several iwi kūpuna were returned to a Hawaiian delegation during a handover ceremony in Germany today.

At a solemn handover ceremony today, eight iwi kūpuna (ancestral remains) from the collections held in the Übersee-Museum Bremen were returned to representatives of the Office of Hawaiian Affairs (OHA) from the United States (U.S.), State of Hawaiʻi.

Edward Halealoha Ayau, Kalehua Caceres and Mana Caceres took part in the ceremony at the Übersee-Museum Bremen as representatives of OHA. The Hawaiian delegation was accompanied by the U.S. Consul General from Hamburg, Darion Akins. The Free Hanseatic City of Bremen was represented by the President of the Senate, Mayor Dr. Andreas Bovenschulte; the Übersee-Museum Bremen by its Director, Prof. Dr. Wiebke Ahrndt, and the Head of Natural History Department, Dr. Michael Stiller.

OHA applied to the Übersee-Museum Bremen in August 2019 to have the remains returned. The museum then worked with the Senator for Culture and OHA to undertake a comprehensive investigation and documentation of the matter using the sources available and on the basis of ethical standards; this work was funded by the German Lost Art Foundation. After a thorough examination, the Übersee-Museum recommended to the Senate of the Free Hanseatic City of Bremen that the ancestral remains be returned. The Senate approved the application at its meeting on Feb. 1, 2022.

“In recent years, Europe has witnessed the development of a distinct awareness that for ethical reasons in particular, it is absolutely imperative to thoroughly investigate the circumstances under which the collections held in museums were created. This relates especially to collections of human remains. The assessment of whether a scientific interest can justify bringing human remains from another culture to Germany to then exhibit and investigate them is now fundamentally different to how it was in colonial times. Questions as to the legitimacy of this supposed ownership are also fortunately answered in a different way today. We therefore have the responsibility, the moral duty, and the historic opportunity to put an end to the wrong that has been done. We cannot make amends. We can only sincerely ask for your forgiveness and express our remorse for what was done to your people and your ancestors,” said Bremen’s Mayor, Dr. Andreas Bovenschulte, addressing the delegation from Hawaiʻi.

The research undertaken in this case showed that the human remains found their way into the Übersee-Museum via different routes. Two of these were left to the museum by Kurt-Felix (or Kurd-Felix) Franke in 1934 and Hermann von Eelking in 1865. Two more ancestral remains were handed over to the museum by Prof. Hugo Schauinsland, Founding Director of the Übersee-Museum, most likely in 1897.

No such information is available for the remaining four ancestral remains. The labeling provided initial indications of a more precise geographic attribution for at least five of them: four of the iwi kūpuna are believed to originate from Kauaʻi and one from Molokaʻi. It was not possible to retrace which sources had been used as the basis for this information. For two further ancestral remains, the sources possibly indicates that they originate from Hawaiʻi Island.

“There has been much change in the last decade amongst museum professionals and anthropological scholars that demonstrates a better understanding of Indigenous peoples and the past injustices committed against us. We certainly acknowledge this and applaud the re-humanization of these individuals and institutions,” said OHA Board Chair Carmen “Hulu” Lindsey. “Today, these actions allow us to heal, not only as individuals, but as a lāhui (Hawaiian nation).”

Today’s event is part of a major initiative by OHA and Native Hawaiian cultural practitioners to repatriate iwi kūpuna from international collections. On this trip, the Hawaiian delegation will repatriate from four different institutions in Germany and one in Austria, 58 iwi kūpuna taken from Hawaiʻi over a century ago. Leading the Hawaiian delegation is Edward Halealoha Ayau who has led efforts to advocate for and repatriate iwi kūpuna (ancestral Hawaiian skeletal remains), moepū (funerary possessions) and mea kapu (sacred objects) for more than 30 years as the former executive director of Hui Mālama I Nā Kūpuna O Hawai‘i Nei (Group Caring for the Ancestors of Hawai‘i). He continues to work on international repatriation as a volunteer for OHA.

“For ethical reasons, there is no longer any justification for continuing to keep the human remains in our collection. As a general rule, we would never entertain such sensitive purchases of unknown provenance now,” said Prof. Dr. Wiebke Ahrndt. “We bear the responsibility for the mistakes of our predecessors. Our task is to play our part in righting the wrongs of the past.”

Prof. Dr. Ahrndt chaired the working group of the German Museums Association which drew up recommendations on the care of human remains in museums and collections. In returning the remains, the Senate is acting in accordance with the “Framework Principles” on the care of collections from colonial contexts, which was adopted in 2019. It contains a declaration by a joint initiative between the federation, Länder and municipal umbrella organizations that they are generally prepared to return collections from colonial contexts, especially human remains, to the countries and communities of origin.