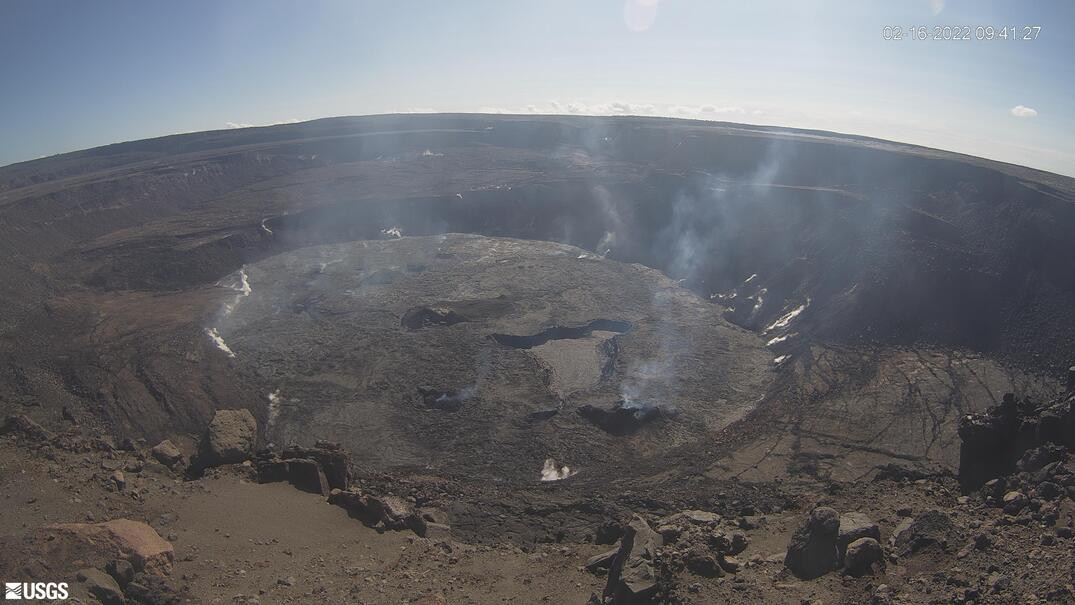 USGS webcam view of Halemaʻumaʻu, the lava lake, and the down-dropped block at the summit of Kīlauea on Wednesday morning.

HAWAIʻI VOLCANOES NATIONAL PARK - The summit eruption of Kīlauea paused starting around midnight, and there are no indications of activity migrating elsewhere on the volcano.

(BIVN) – The on-again, off-again eruption at the summit of Kīlauea volcano has paused once again.

The USGS Hawaiian Volcano Observatory says the latest activity pause starting around midnight, with minor ooze outs and diminished glow. Scientists say there are no indications of activity migrating elsewhere on Kīlauea.

Halemaʻumaʻu Lava Lake Observations: Effusion of lava was greatly diminished starting around midnight from the western vent within Halemaʻumaʻu crater. This has resulted in a drop in lava surface level of the western part of the lava lake by approximately 12 m (40 ft). This corresponds with the deflationary signal from the early morning of February 15. As of 7:55 am HST this morning the activity part of the lava lake is crusted over with minor ooze outs along the margins of the lava lake being quiet. The active lava lake is now approximately 89 meters (292 feet) deep relative to when lava emerged on September 29, 2021. Measurements on January 25, 2022, indicated that the total lava volume effused since the beginning of the eruption was approximately 45 million cubic meters (12.0 billion gallons) at that time.

Summit Observations: Summit tiltmeters indicated that Kīlauea summit was entering a period of inflation beginning this morning around midnight, but this inflation is very slow with only 0.25 microradians change since midnight. Seismic data shows that the volcanic tremor signal is decreased during this period of paused activity. Earthquake activity at the summit remains below background level. A sulfur dioxide (SO2) emission rate of approximately ~2800 tonnes per day (t/d) was measured yesterday, February 14.