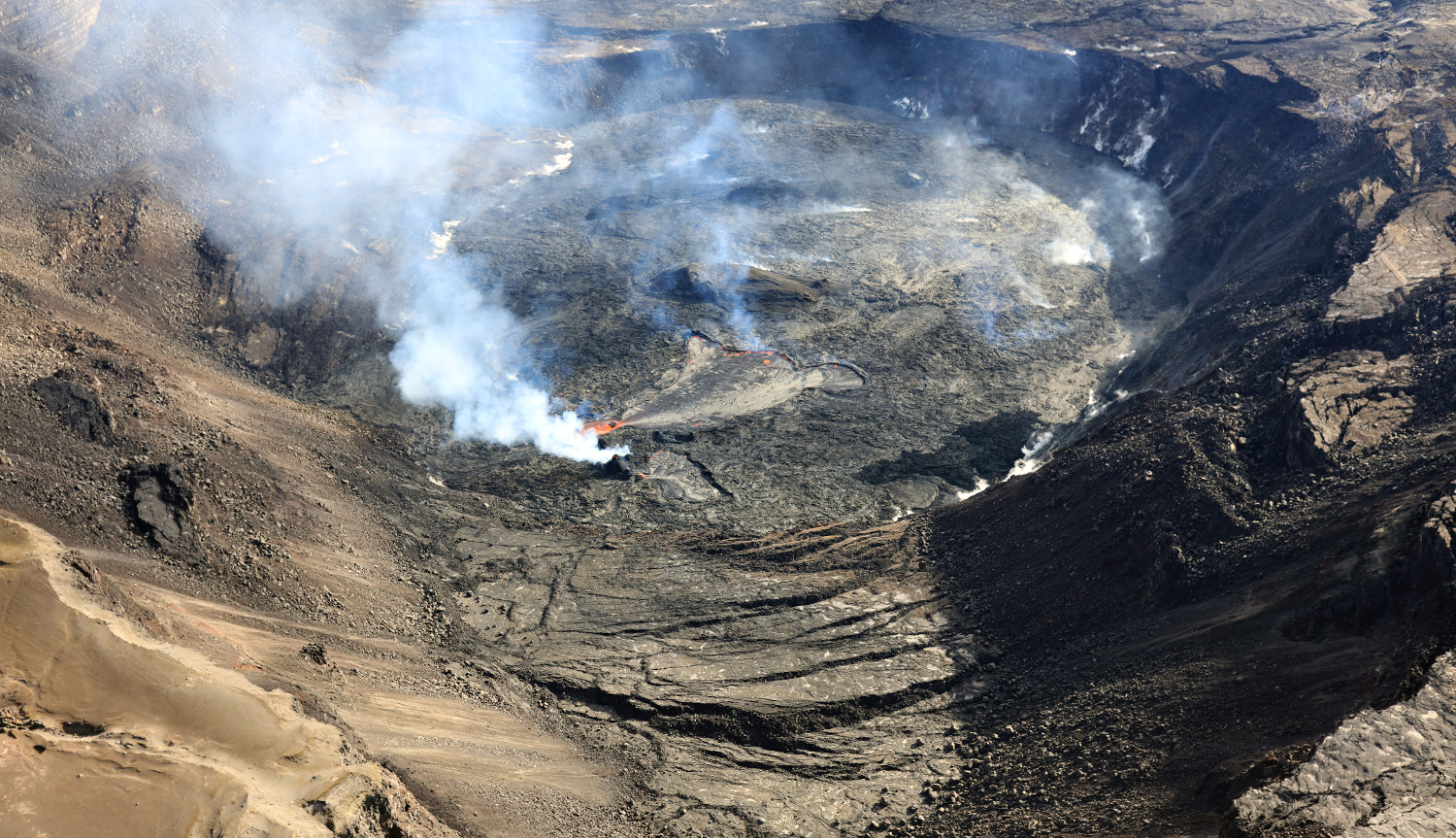 USGS: "Aerial view of Halema‘uma‘u crater and the ongoing eruption within it. This view, to the northeast, shows one of several down-dropped blocks that formed during Kīlauea's summit collapse events in 2018. The drown-dropped block, which is in the foreground of the photo, has numerous cracks on its surface; the active vent is near the center of the image and emitting volcanic gas." (USGS image by F. Trusdell.)

HAWAIʻI VOLCANOES NATIONAL PARK - Seismic signals provide evidence of underground magma migration or accumulation, which can be used to look for signs of changing activity. 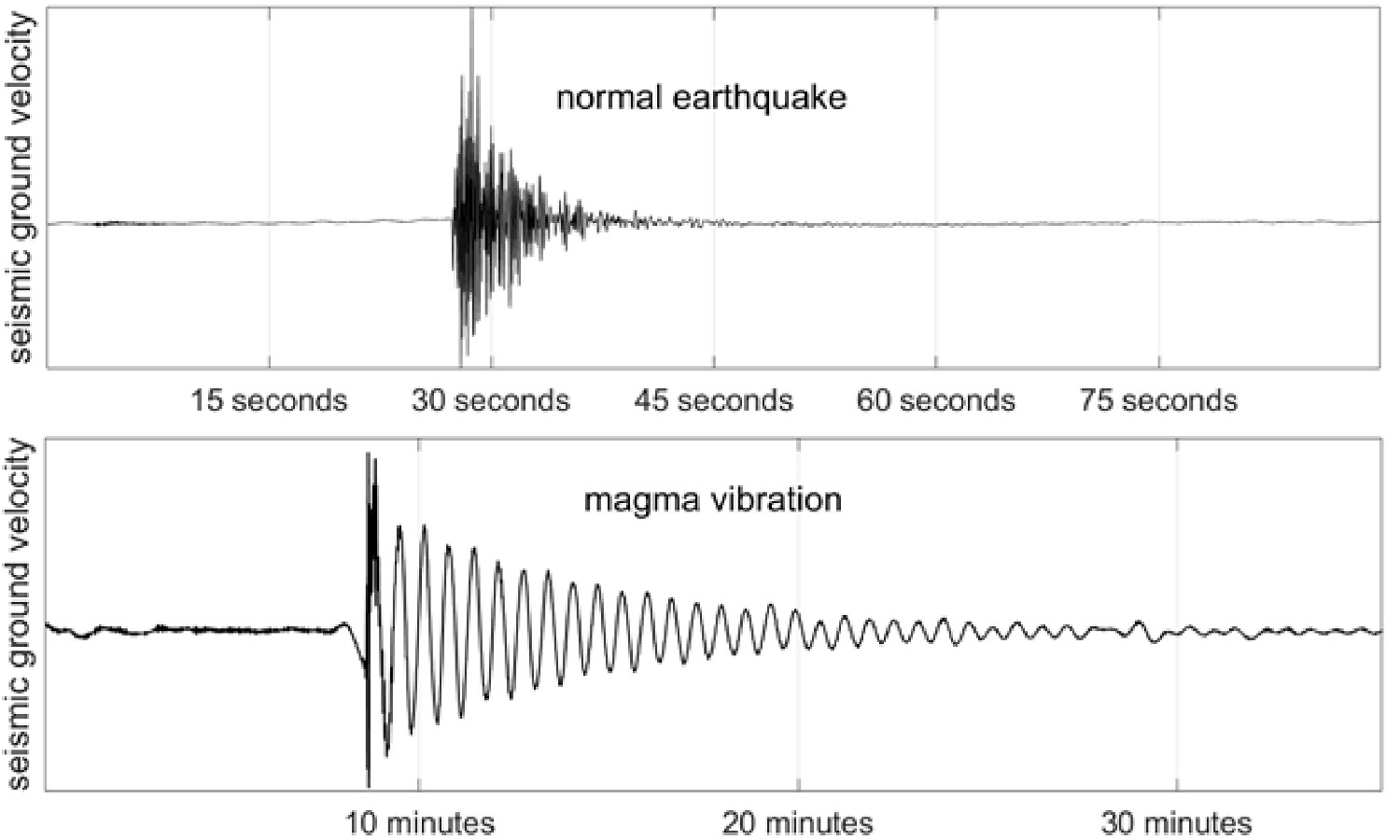 USGS: “The top plot shows a 2013 seismic recording of a normal shallow magnitude-2 earthquake that occurred a few miles south of the summit of Kīlauea Volcano. The bottom plot shows a 2013 seismic recording of magma resonance after a large rock broke off the Halema‘uma‘u crater walls at the summit of Kīlauea Volcano and then impacted the lava lake surface. Note the different timescales; the normal earthquake only lasted for about 20 seconds in total, whereas each magma oscillation cycle lasted for 40 seconds and the vibrations continued for over 20 minutes in total.”

(BIVN) – The summit eruption of Kīlauea Volcano within Halemaʻumaʻu crater has continued over the past 24 hours, and scientists say all recent activity remains confined to the smaller active lake within the crater.

The latest US Geological Survey Volcano Watch takes a look at some of the clues that can give scientists an idea of what may be going on below the surface of Kīlauea.

Disturbances to a magma or lava body—such as Kīlauea Volcano’s underground summit magma reservoir or its current lava lake—can occur for a variety of reasons, including rising gas pockets or the fall of wall rocks into a lava lake. When a body of magma or lava is disturbed, the fluid in it can respond by vibrating or sloshing in a variety of ways.

In a lava lake, such as the one present from 2008–2018 in Kīlauea’s summit Halema‘uma‘u crater, we can sometimes visually observe these fluid motions as ripples or sloshing of the surface following disturbances from rockfalls or gas bursts.

We can also detect deeper magma motion by using seismometers to measure ground vibrations. The seismic signals generated by magma motion, such as the example shown in the figure, are often distinct from other types of seismic signals. Compared to normal earthquakes, magma motion usually produces relatively slow vibrations, where the ground rises and falls over several seconds or tens of seconds.

For decades scientists have been interpreting these seismic signals at volcanoes in Hawaiʻi and around the world as evidence of underground magma migration or accumulation, which can be used to look for signs that might indicate an impending eruption. In recent years, scientists have been learning new methods to use these seismic signals to resolve properties of underground magma systems that might not otherwise be measurable.

Magma or lava bodies vibrate most strongly at certain frequencies, called resonant frequencies, that depend on the body’s geometry and the properties of the magma or lava it contains, such as temperature and gas content. This is similar to how the musical notes produced by an instrument like a pan flute, bell, or a kāʻekeʻeke depend on the instrument’s shape and the properties of the air in it.

If a magma or lava is very fluid, for example like water rather than maple syrup, then a single perturbation can cause the magma body to resonate (vibrate or slosh at its strongest frequencies) for tens of minutes, such as the example shown in the figure.

Such resonance has helped to reveal Kīlauea’s shallow summit magma system geometry, for example suggesting that the conduit connecting its shallow summit magma reservoir with the overlying lava lake in Halema‘uma‘u from 2008–2018 was more than 50 feet wide. It has also revealed complex magma dynamics over the past decade, including convective overturns and melt supply pulses, which inform the restless nature of Kīlauea Volcano.

If you have a chance to stand near one of Hawaii’s active volcanoes, remember that the magma several kilometers beneath your feet could be subtly vibrating. And if visiting a volcano isn’t convenient, just tap on the side of a glass of water and watch the fluid resonance that results.