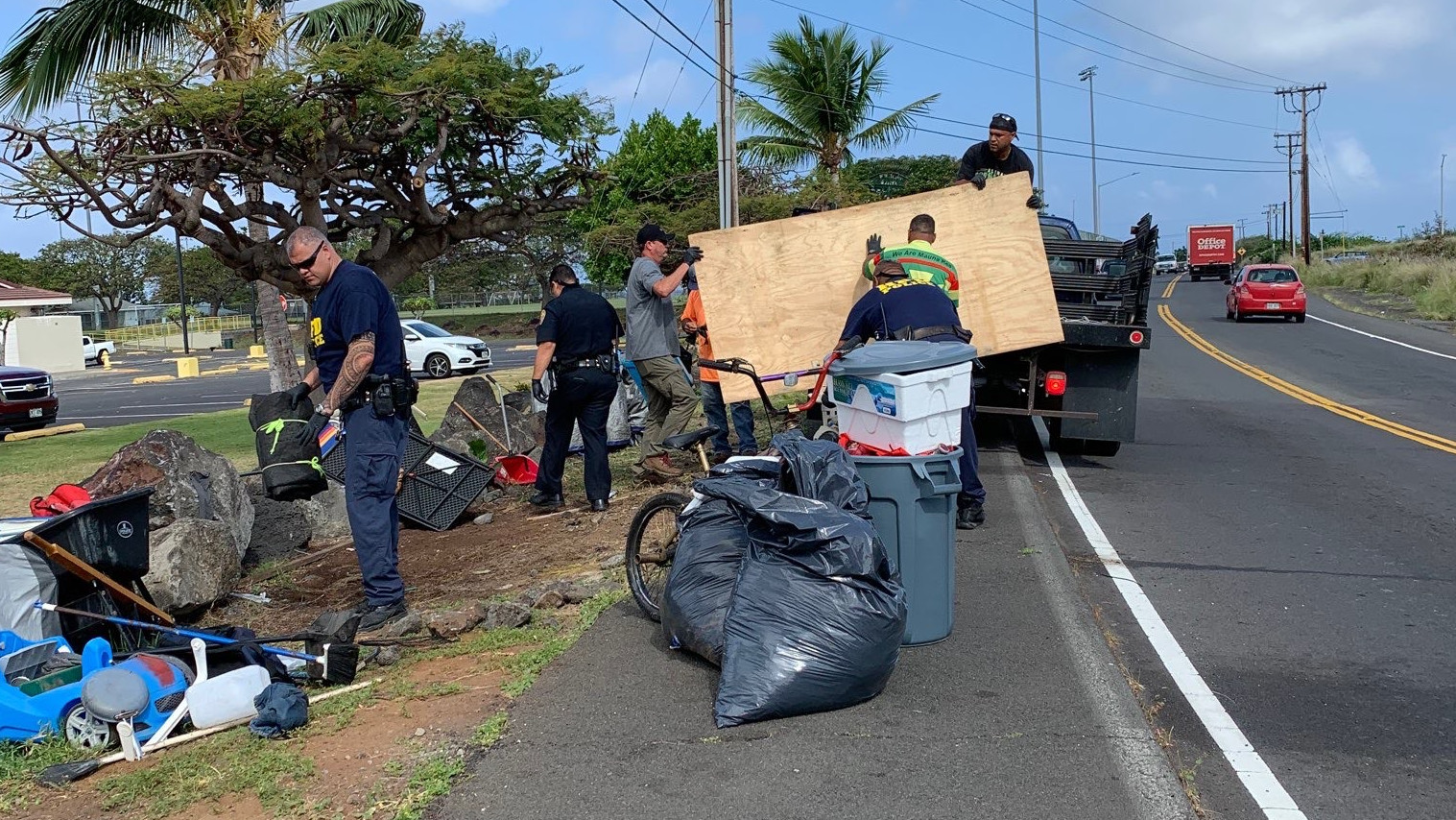 KONA, Hawaiʻi - The longtime Hawaiʻi residents moved into Hope Services shelters this week, after they pitched tents outside the Kona Community Aquatic Center. 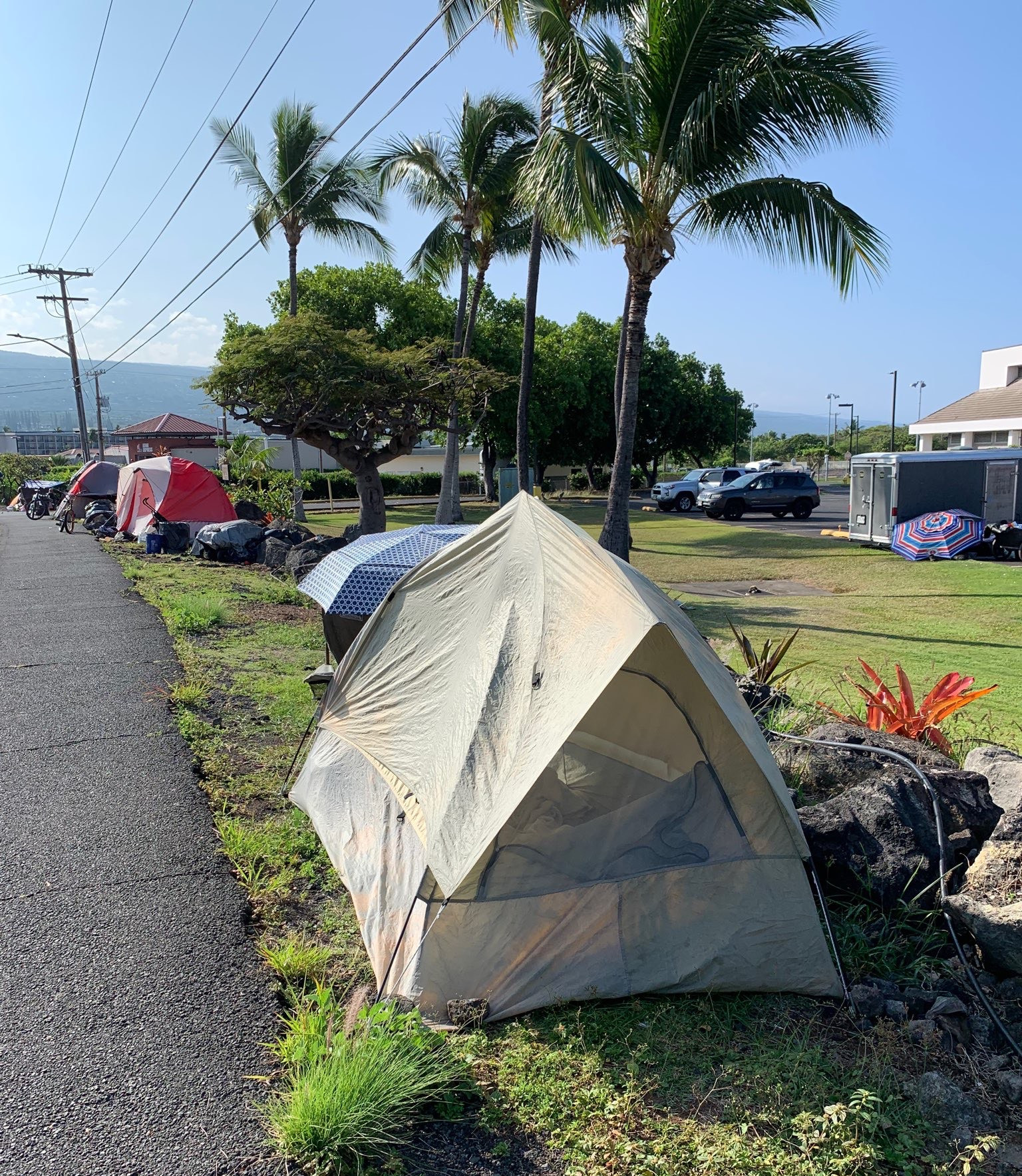 (BIVN) – Hope Services Hawaiʻi says it has given shelter to 20 locals who were camped near the Kona Community Aquatic Center.

The residents moved into tents by the pool area following a sweep at the Old Kona Airport Park, Hope Services says.

This news release was shared on Saturday:

The residents, who had pitched eleven tents outside the Kona Community Aquatic Center, told outreach workers they had previously taken refuge in the bushes at the Old Kona Airport Park, but were forced out when the county performed a sweep of the park ahead of a concert earlier this month. Without assistance finding shelter, the residents moved down the road, relocating to just outside the community pool.

Soon after, the calls began.

“We started receiving calls and emails from the county, business owners, and concerned citizens asking us to help these folks,” says Hope Outreach Team Lead Carrie Hoʻopiʻi. “The county called a meeting, and asked if we could offer them shelter. Our shelters were already pretty full, and I wasn’t sure we’d be able to find space for everyone, but I told them we would try.” 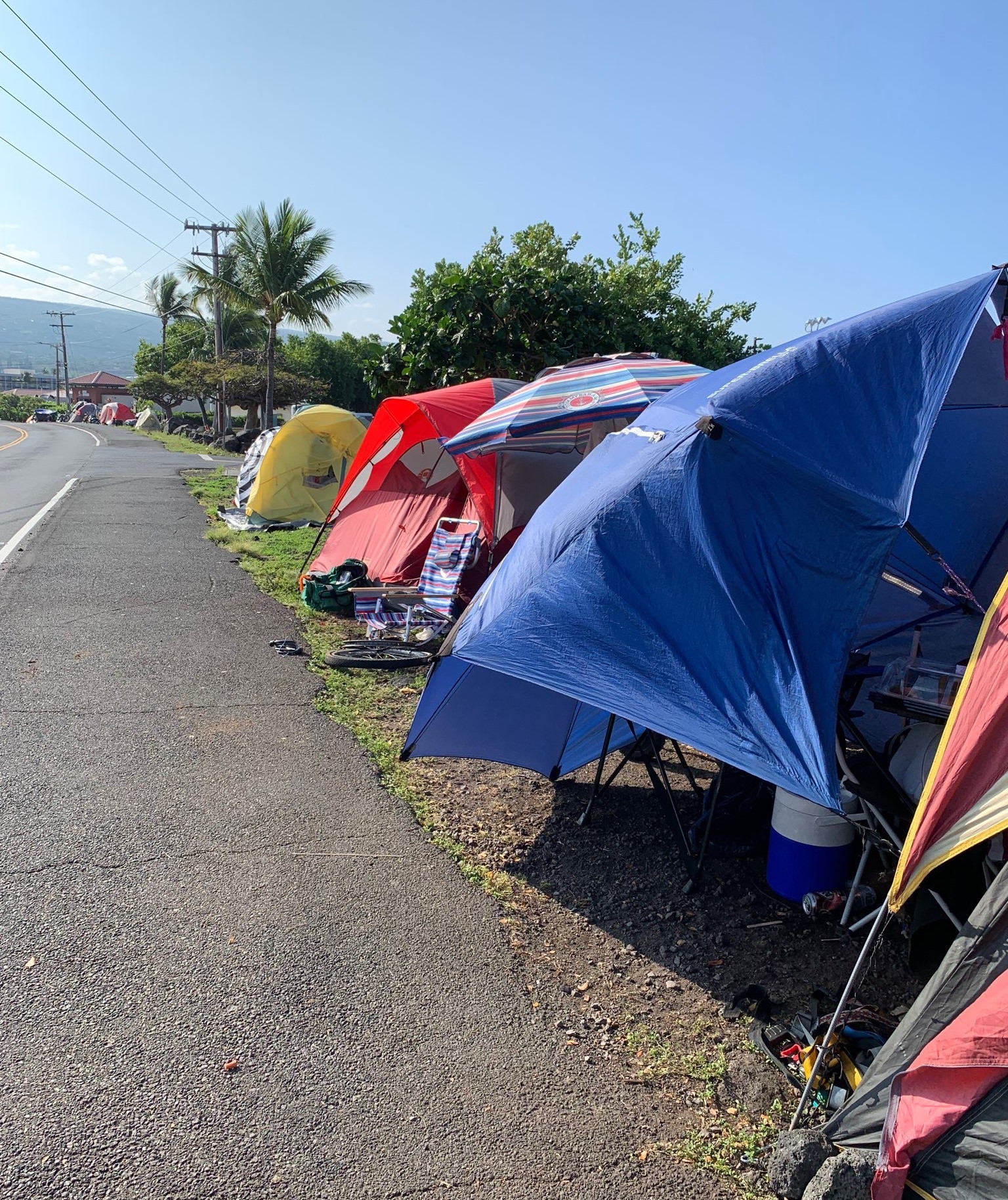 Because Ka Lamakū’s units each have space for two adults, some of the single residents volunteered to move to the West Hawai’i Emergency Housing Program to make space for the couples from the group. Employees at both shelters quickly made arrangements to free up as much space as possible, and welcome the incoming residents.

“I knew my team and I would need help moving that many people into shelter at once, so I put out the call for help from our partners,” says Ho’opi’i.

Ho’opi’i’s call was answered by six employees from the County of Hawai’i, two outreach workers from CARE Hawai’i, three community policing officers, and longtime volunteer Linda Vandervoort. The team spent all day Thursday assisting with intakes and move-ins, and returned Friday to finish.

By the end of the day, all twenty residents had moved in.

Hoʻopi’i expressed gratitude for those who helped. “We never know when we are going to encounter something like this, and our team wouldn’t have been able to help all the people this quickly on our own. We are so grateful to the community members who were willing to come out and help.”

During the intake process the team learned that all twenty individuals were local residents from Hawai’i. Fourteen identified as Native Hawaiian, four as Caucasian, and two as African-American. Most had lost their homes because the rent had become unaffordable, or as a result of family issues.

“People are starting to realize the problem isn’t houseless people flying in from outside, it’s housing speculation from outside. That’s what’s pricing locals out and pushing them to the streets.”

42% of all homes sold in Hawaiʻi County from 2017 to 2020 were purchased by out–of-state investors, the highest rate among the counties, according to the Hawaiʻi Budget and Policy Center. Whatʻs more, the center reports that “52 percent of out-of-state owners left their units unoccupied when they or their friends were not using them.”

“We do what we can, but as a private organization dependent on government funding and donations, we don’t have the authority to regulate the housing market,” says Menino. “However, we are grateful for the county’s recent commitment to allocate additional funding to county sponsored homeless programs and affordable housing. We hope we’ll see a commitment to responsibly funding evidence-based programs that successfully get people into permanent housing. We’d love to see our county move away from expecting police to handle houselessness, and instead invest in expanding the number of trained social services staff who can assist people on the streets.”

Hoʻopiʻi agrees. “Most of the people we help are our neighbors, born and raised here. Instead of pushing them from place to place on the streets, we should work together to get them back into housing. I’m proud of the people who recognized that this week. Together, we brought twenty people closer to home.