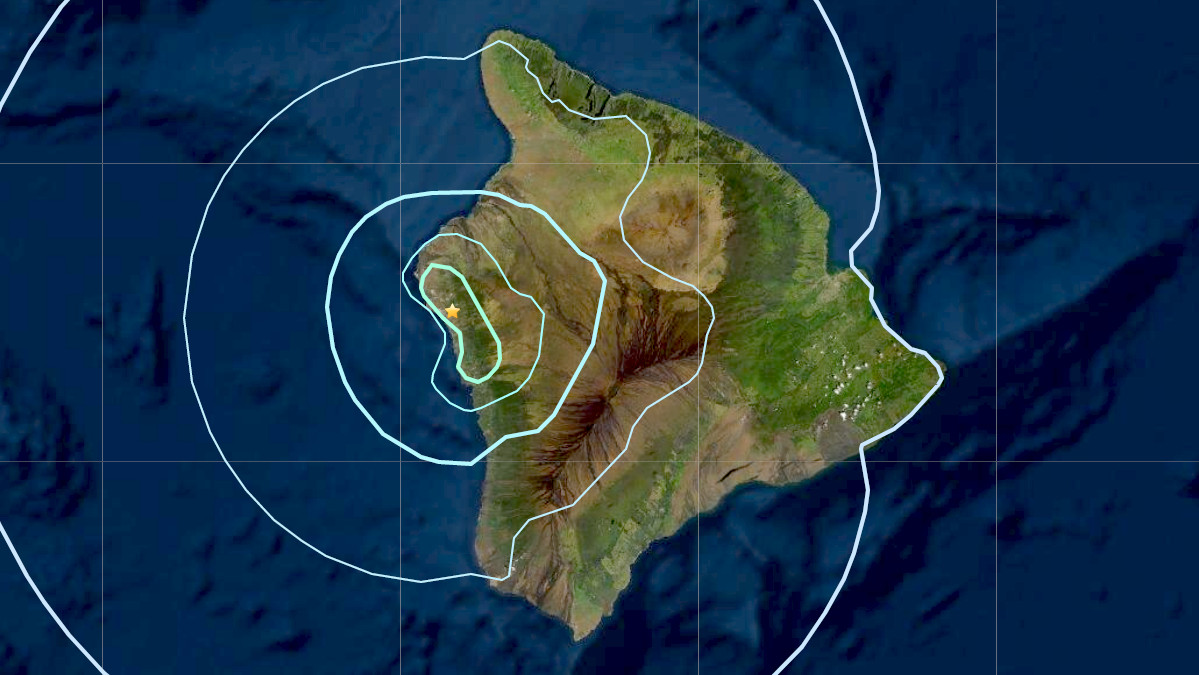 KONA, Hawaiʻi - Scientists say the earthquake located beneath Hualalai volcano does not appear to be directly related to magmatic activity.

(BIVN) – A Magnitude 4.7 earthquake that occurred late Saturday night (11:50 p.m. HST) was felt across Hawaiʻi island, but did not generate a tsunami.

The earthquake was located beneath Hualālai volcano, 1 mile east-northeast of Kailua-Kona at a depth of 7 miles below sea level. Scientists say the temblor does not appear to be directly related to magmatic activity.

Hualālai is the third most active volcano on the island of Hawaiʻi. Scientists say the volcano typically erupts two to three times per 1,000 years. Hualālai last erupted in 1801.

Moderate shaking, with a maximum instrumental intensity of V on the Modified Mercalli Intensity Scale, has been reported widely across the Island of Hawai‘i and as far away as Kauaʻi. At that intensity, very light damage to buildings or structures could occur. The USGS “Did you feel it?” service received over 1020 felt reports within the first hour of the earthquake.

Over the past 25 years, there have only been 2 earthquakes with magnitudes greater than 4.0 beneath Hualalai volcano, including today’s event. This event was primarily lateral slip along a sub-vertical fault and does not appear to be directly related to magmatic activity. Aftershocks are likely, and some may be felt.

According to HVO Scientist-in-Charge Ken Hon the earthquake had no apparent effect on Mauna Loa or Kīlauea Volcano’s ongoing summit eruption. HVO monitoring networks have not detected any significant changes in activity at the summit or along the rift zones of Kīlauea resulting from the earthquake.