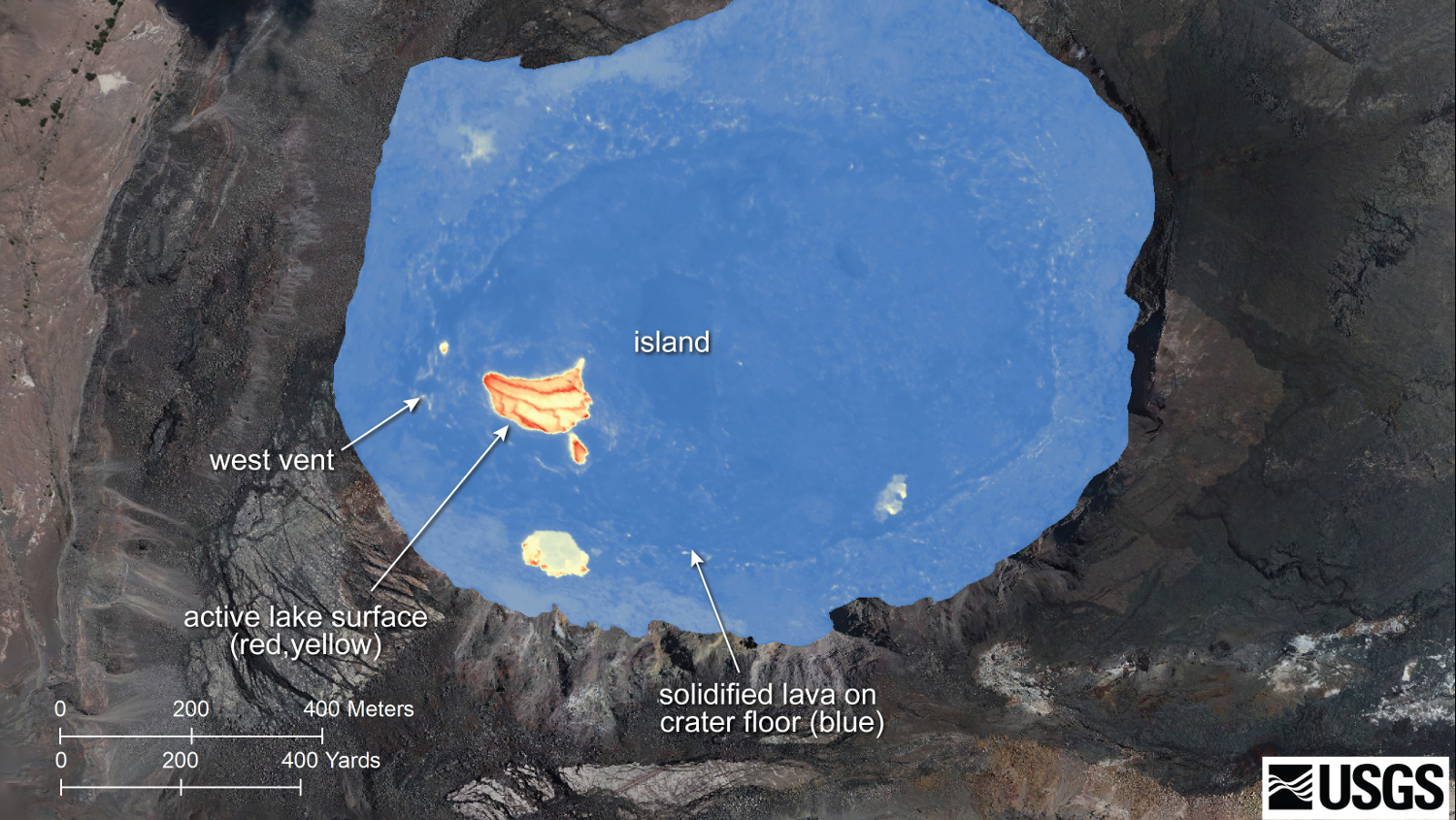 USGS: (inset) "A helicopter overflight on June 17, 2022, allowed for aerial visual and thermal imagery to be collected of Halema‘uma‘u crater at the summit of Kīlauea. The active lake surface is limited to the western portion of the crater. The scale of the thermal map ranges from blue to red, with blue colors indicative of cooler temperatures and red colors indicative of warmer temperatures."

HAWAIʻI VOLCANOES NATIONAL PARK - Scientists gathered the volcano image data during a helicopter overflight on the morning of June 17, 2022. USGS: “An image of Halema‘uma‘u taken during a Kīlauea summit helicopter overflight on the morning of June 17, 2022. There are several areas of degassing (the small white plumes) located across the lake surface, some of which are associated with hornitos. Hornitos are small, rootless cones that are fed by the tube network within the lava lake. The active portion of the lava lake is located on the western side of the lake (right side of the photograph). The Hawai‘i Volcanoes National Park eruption public viewing area at Keanakāko‘i can be seen in the upper left of the photograph.” (USGS photograph by L. Gallant)

(BIVN) – The summit eruption of Kīlauea Volcano continues, and the USGS Hawaiian Volcano Observatory recently provided updated maps and images of the activity.

During a helicopter overflight on June 17, scientists gathered imagery and data of the eruption within Halemaʻumaʻu crater. All recent lava activity has been confined to the crater, USGS reportes, and current data indicate that this scenario is likely to continue. 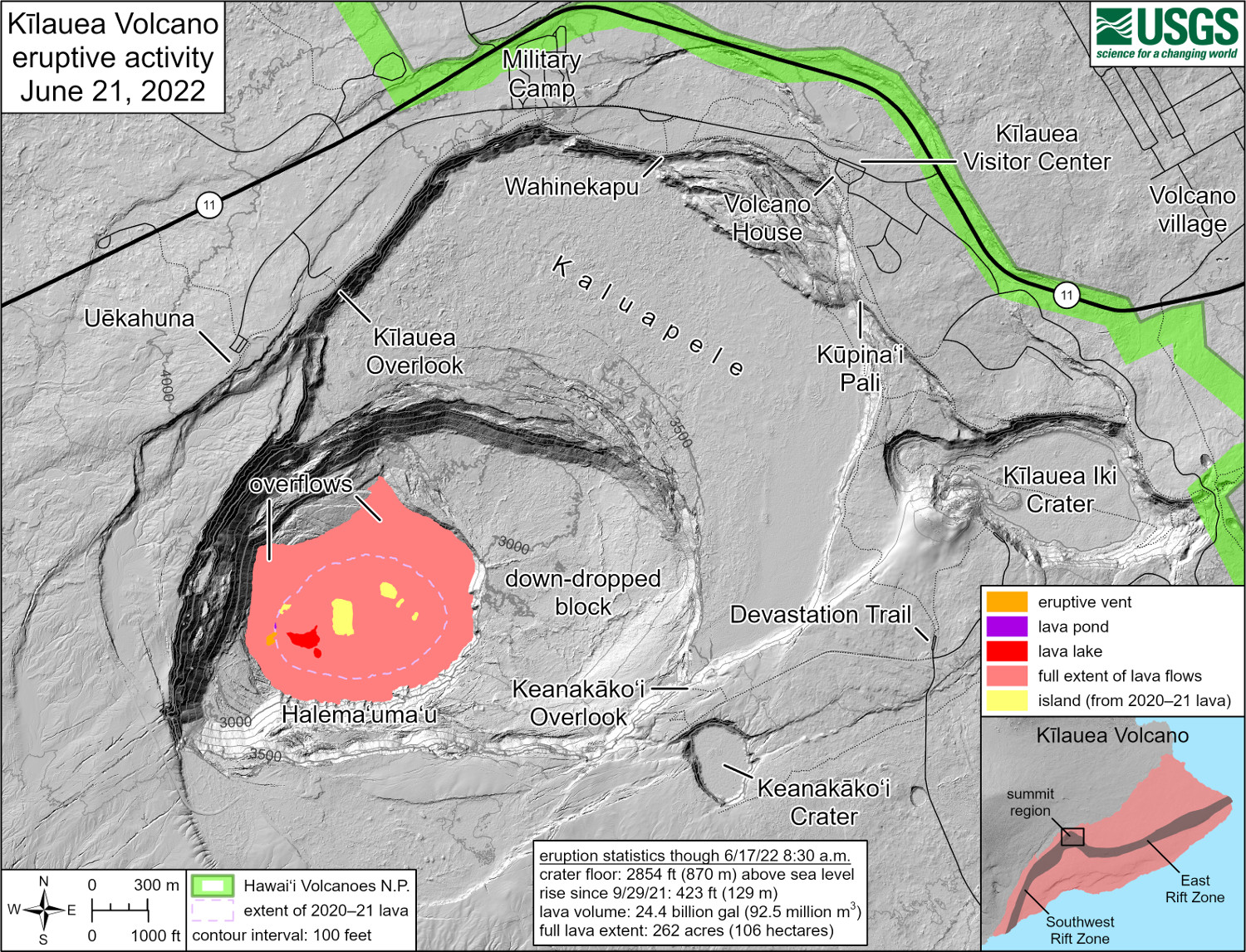 USGS: “This reference map depicts the ongoing Kīlauea summit eruption on June 21, 2022. One eruptive vent (orange) is active within Halema‘uma‘u, on the western side of the crater floor. An adjacent pond (purple) is feeding lava to a larger lake (red); though at times the lava level has dropped and circulation has diminished, the pond and lake have consistently hosted active lava in recent weeks. The eruption statistics provided here are current as of the last HVO overflight on June 17, 2022. Unlike the median elevation reported in several of the most recent eruption reference maps, this map provides a volume-averaged elevation for the crater floor—2,854 feet (870 meters) above sea level—and its rise since September 29, 2021.”

From Wednesday’s update from the USGS:

Halemaʻumaʻu Lava Lake Observations: Eruption of lava from the Halemaʻumaʻu western vent into the active lava lake, and ooze-outs onto the crater floor, have continued over the past 24 hours. Lava ooze-out activity has continued along the eastern and southern edges of the crater floor. Overflight measurements on June 17, 2022, indicated that the crater floor had seen a total rise of about 120 meters (394 feet) and that 93 million cubic meters (24 billion gallons) of lava had been effused since the beginning of this eruption on September 29, 2021.

Summit Observations: Summit tiltmeters recorded slight inflation over the past 24 hours. A sulfur dioxide (SO2) emission rate of approximately 2,300 tonnes per day (t/d) was measured on June 21, 2022.

Scientists say lava is presently visible from three public visitor overlooks in Hawai‘i Volcanoes National Park: Keanakāko‘i Overlook and Kūpina‘i Pali, or Waldron Ledge, where the eruptive vent and lava lake can be seen. From Kīlauea Overlook, viewers can also see lava ooze-outs in the southeast part of the crater.