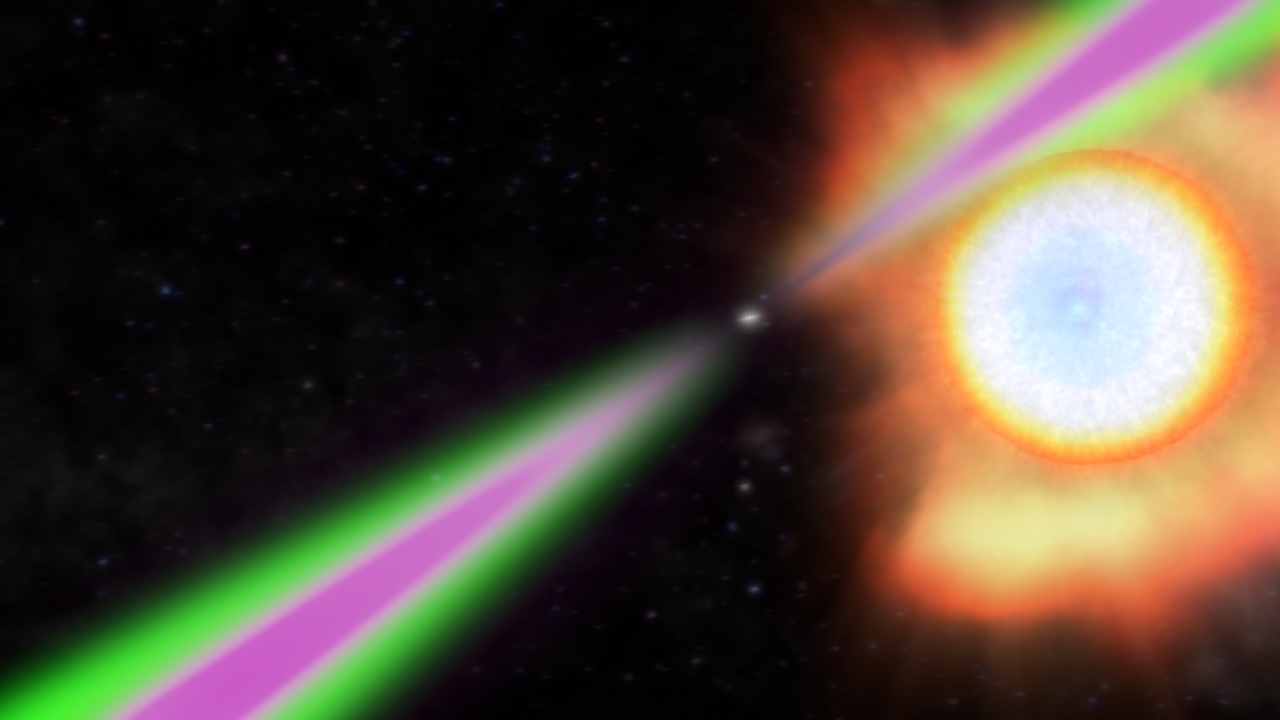 MAUNAKEA, Hawaiʻi - A record-setting neutron star about 3,000 light years from Earth has shredded and consumed nearly the entire mass of its stellar companion.

(BIVN) – W. M. Keck Observatory on Maunakea on Tuesday released the details on a “black widow” neutron star that consumed its stellar companion and grew to become the heaviest neutron star observed to date.

A dense, collapsed star spinning 707 times per second — making it one of the fastest spinning neutron stars in the Milky Way galaxy — has shredded and consumed nearly the entire mass of its stellar companion and, in the process, grown into the heaviest neutron star observed to date.

The study was performed using W. M. Keck Observatory on Maunakea, Hawaiʻi Island and is published in today’s issue of The Astrophysical Journal Letters.

Weighing this record-setting neutron star, which tops the charts at 2.35 times the mass of the Sun, helps astronomers understand the weird quantum state of matter inside these dense objects, which — if they get much heavier than that — collapse entirely and disappear as a black hole.

“We know roughly how matter behaves at nuclear densities, like in the nucleus of a uranium atom,” said Alex Filippenko, Distinguished Professor of Astronomy at the University of California, Berkeley. “A neutron star is like one giant nucleus, but when you have one-and-a-half solar masses of this stuff, which is about 500,000 Earth masses of nuclei all clinging together, it’s not at all clear how they will behave.” 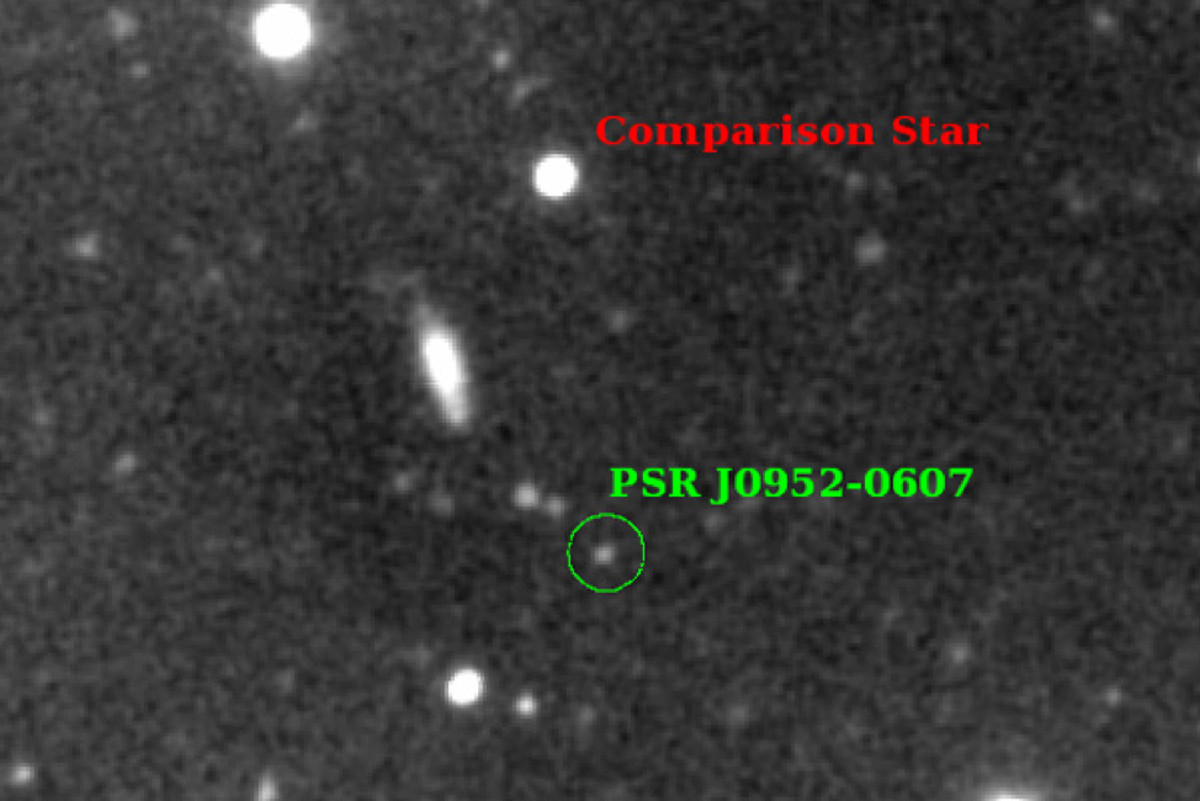 Astronomers measured the velocity of a faint star (green circle) that has been stripped of nearly its entire mass by an invisible companion, a neutron star and millisecond pulsar that they determined to be the most massive yet found and perhaps the upper limit for neutron stars. (courtesy W. M. Keck Observatory, Roger W. Romani, Alex Filippenko)

Stanford University Professor of Astrophysics Roger W. Romani noted that neutron stars are so dense — 1 cubic inch weighs over 10 billion tons — that their cores are the densest matter in the universe short of black holes, which are impossible to study because they are hidden behind their event horizon. The neutron star, a pulsar designated PSR J0952-0607, is thus the densest object within sight of Earth.

The measurement of the neutron star’s mass was possible thanks to the extreme sensitivity of the 10-meter Keck I telescope. Using Keck Observatory’s Low Resolution Imaging Spectrometer (LRIS), the team was just able to record a spectrum of visible light from the hotly glowing companion star, now reduced to the size of a large gaseous planet. The stars are about 3,000 light years from Earth in the direction of the constellation Sextans.

Discovered in 2017, PSR J0952-0607 is referred to as a “black widow” pulsar — an analogy to the tendency of female black widow spiders to consume the much smaller male after mating. Filippenko and Romani have been studying black widow systems for more than a decade, hoping to establish the upper limit on how large neutron stars/pulsars can grow.

“By combining this measurement with those of several other black widows, we show that neutron stars must reach at least this mass, 2.35 plus or minus 0.17 solar masses,” said Romani, who is a professor of physics in Stanford’s School of Humanities and Sciences and member of the Kavli Institute for Particle Astrophysics and Cosmology. “In turn, this provides some of the strongest constraints on the property of matter at several times the density seen in atomic nuclei. Indeed, many otherwise popular models of dense-matter physics are excluded by this result.”

If 2.35 solar masses is close to the upper limit of neutron stars, the researchers say, then the interior is likely to be a soup of neutrons as well as up and down quarks — the constituents of normal protons and neutrons — but not exotic matter, such as “strange” quarks or kaons, which are particles that contain a strange quark.

“A high maximum mass for neutron stars suggests that it is a mixture of nuclei and their dissolved up and down quarks all the way to the core,” Romani said. “This excludes many proposed states of matter, especially those with exotic interior composition.”

How large can they grow?

Astronomers generally agree that when a star with a core larger than about 1.4 solar masses collapses at the end of its life, it forms a dense, compact object with an interior under such high pressure that all atoms are smashed together to form a sea of neutrons and their subnuclear constituents, quarks. These neutron stars are born spinning, and though too dim to be seen in visible light, reveal themselves as pulsars, emitting beams of light — radio waves, X-rays or even gamma rays — that flash Earth as they spin, much like the rotating beam of a lighthouse.
“Ordinary” pulsars spin and flash about once per second, on average, a speed that can easily be explained given the normal rotation of a star before it collapses. But some pulsars repeat hundreds or up to 1,000 times per second, which is hard to explain unless matter has fallen onto the neutron star and spun it up. But for some millisecond pulsars, no companion is visible.

One possible explanation for isolated millisecond pulsars is that each did once have a companion, but it stripped it down to nothing.

“The evolutionary pathway is absolutely fascinating. Double exclamation point,” Filippenko said. “As the companion star evolves and starts becoming a red giant, material spills over to the neutron star, and that spins up the neutron star. By spinning up, it now becomes incredibly energized, and a wind of particles starts coming out from the neutron star. That wind then hits the donor star and starts stripping material off, and over time, the donor star’s mass decreases to that of a planet, and if even more time passes, it disappears altogether. So, that’s how lone millisecond pulsars could be formed. They weren’t all alone to begin with — they had to be in a binary pair — but they gradually evaporated away their companions, and now they’re solitary.”

The pulsar PSR J0952-0607 and its faint companion star support this origin story for millisecond pulsars.

“These planet-like objects are the dregs of normal stars which have contributed mass and angular momentum, spinning up their pulsar mates to millisecond periods and increasing their mass in the process,” Romani said.

“In a case of cosmic ingratitude, the black widow pulsar, which has devoured a large part of its mate, now heats and evaporates the companion down to planetary masses and perhaps complete annihilation,” said Filippenko.

Spider pulsars include redbacks and tidarrens

Finding black widow pulsars in which the companion is small, but not too small to detect, is one of few ways to weigh neutron stars. In the case of this binary system, the companion star — now only 20 times the mass of Jupiter — is distorted by the mass of the neutron star and tidally locked, similar to the way our moon is locked in orbit so that we see only one side. The neutron star-facing side is heated to temperatures of about 6,200 Kelvin, or 10,700 degrees Fahrenheit, a bit hotter than our sun, and just bright enough to see with a large telescope.
Filippenko and Romani turned the Keck I telescope on PSR J0952-0607 on six occasions over the last four years, each time observing with LRIS in 15-minute chunks to catch the faint companion at specific points in its 6.4-hour orbit of the pulsar. By comparing the spectra to that of similar Sun-like stars, they were able to measure the orbital velocity of the companion star and calculate the mass of the neutron star.

Filippenko and Romani have examined about a dozen black widow systems so far, though only six had companion stars bright enough to let them calculate a mass. All involved neutron stars less massive than the pulsar PSR J0952-060. They’re hoping to study more black widow pulsars, as well as their cousins: redbacks, named for the Australian equivalent of black widow pulsars, which have companions closer to one-tenth the mass of the Sun; and what Romani dubbed tidarrens — where the companion is around one-hundredth of a solar mass — after a relative of the black widow spider. The male of this species, Tidarren sisyphoides, is about 1% of the female’s size.

“We can keep looking for black widows and similar neutron stars that skate even closer to the black hole brink. But if we don’t find any, it tightens the argument that 2.3 solar masses is the true limit, beyond which they become black holes,” Filippenko said.

“This is right at the limit of what the Keck telescope can do, so barring fantastic observing conditions, tightening the measurement of PSR J0952-0607 likely awaits the 30-meter telescope era,” added Romani.

The work was supported by the National Aeronautics and Space Administration (80NSSC17K0024, 80NSSC17K0502), the Christopher R. Redlich Fund, the TABASGO Foundation, and UC Berkeley’s Miller Institute for Basic Research in Science.