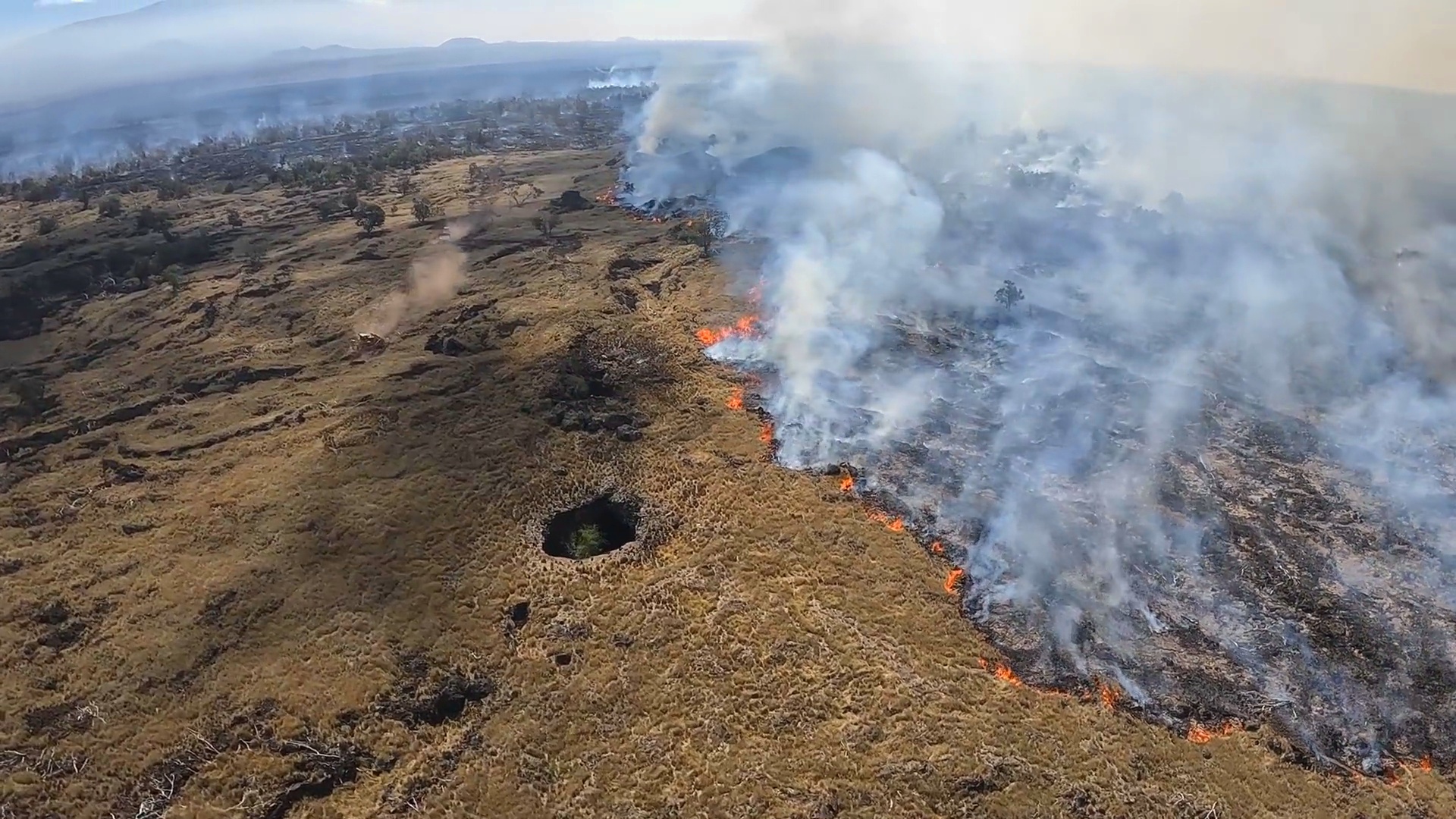 Photo of the fire taken on Friday by the Hawaiʻi DLNR

HAWAIʻI ISLAND - Wind speeds this morning were low but were also expected to increase later in the day, officials said.

(BIVN) – The brushfire that continues to burn on Hawaiʻi island, about 2 miles mauka of Highway 190, is about 50% contained, officials say.

There are no estimates for full control of the fire, stated a media release from the “Unified Command”, the State, County and Federal firefighters working to control the blaze.

Named the “Leilani wildfire” by officials, the blaze started in the Pohakuloa Training Area on Wednesday and “was initially fueled by carpets of dry fountain grass and strong, gusty winds.”

Today, 42 firefighters were on the scene, supported by six helicopters, five bulldozers, and 13 engines, brush trucks, and water tenders are supplementing manpower on the ground, the Unified Command reported.

This morning, the Hawaiʻi Department of Land and Natural Resources reported:

Wind speeds this morning are low but are expected to increase later in the day. High winds could cause the fire to quickly expand in size. The rough terrain is also hindering the ability of dozers to effectively cut fire line. No structures or communities are currently threatened.

Nick Agorastos, the manager of Hawai‘i Island Natural Area Reserves for the DLNR Division of Forestry and Wildlife (DOFAW), says the area, on the border of the South Kohala and North Kohala districts has always been fire prone.

“This area exists in what most consider drought conditions due to its geography and rain patterns. The area averages 25-inches of rain annually, so it is perpetually dry. Fire can pop up almost any day of the year,” Agorastos explained.

He added that blazes like the Leilani fire are fueled by fire loving and adapted species, like fountain grass

“Any uptick in the frequency of fires, is likely due to changes in local weather and climate,” he said.

From a 4 p.m. media release issued by the U.S. Army Garrison Hawaii:

“This team effort truly made a difference. We are very proud of the diverse group of fire fighters here from across the Hawaii Island first responder team of teams, who have fought this fire tirelessly from the beginning,” said Lt. Col. Kevin Cronin, Commander U.S. Army Garrison Pohakuloa.
“With the unified command center serving as the hub of communications and planning, we are grateful for the fluid communications and partnership across this team of teams,” Cronin said.

The 4 p.m. update from the Army reported that the fire containment is still estimated at 50%.

“No significant threatening hotspots were witnessed today, however, helicopters proactively dropped thousands of gallons of water in areas that were still smoking, most of which were well within the burn area,” the Army said.