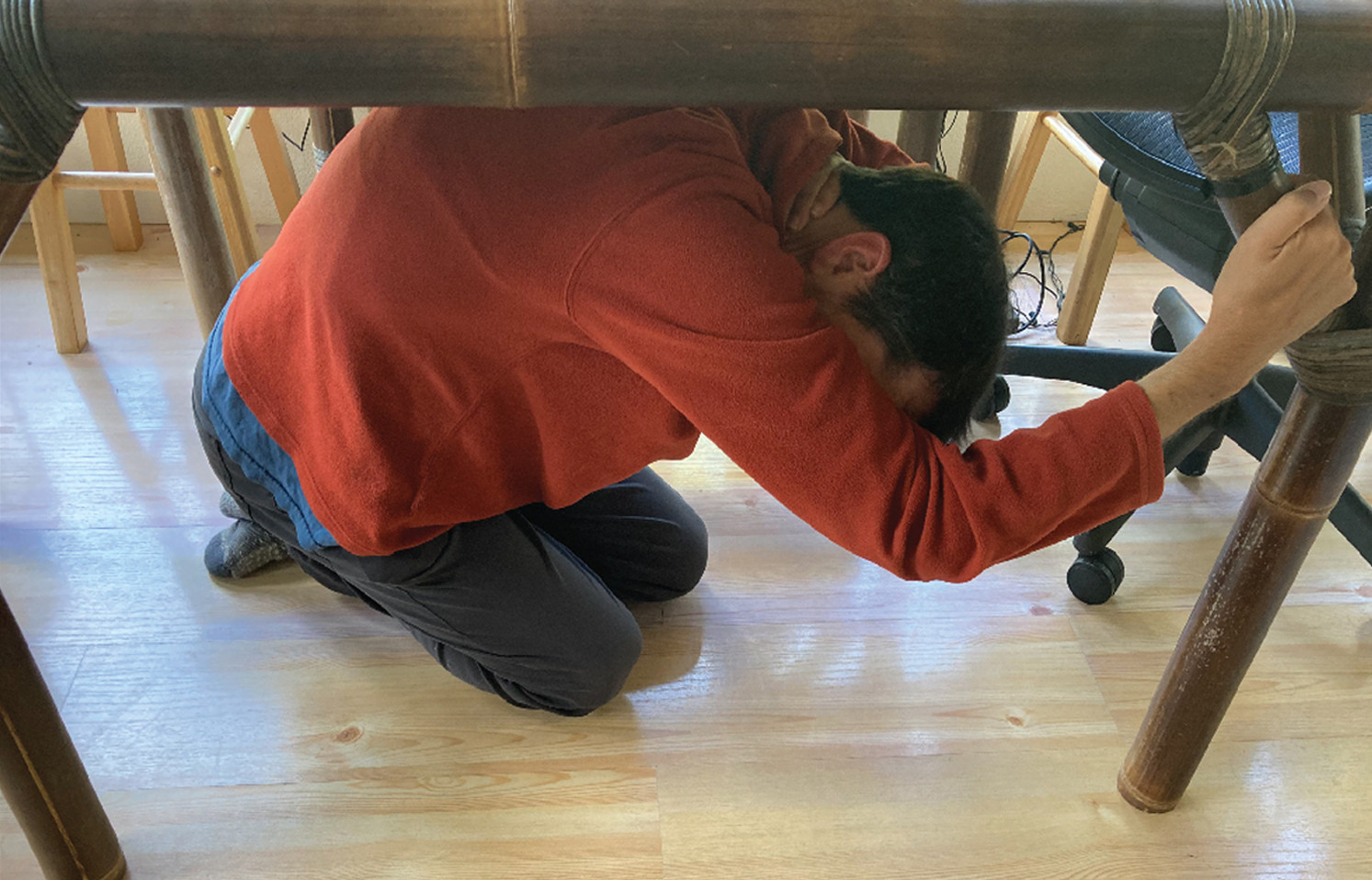 USGS: "Drop, Cover, and Hold on. During an earthquake, you should DROP where you are, onto your hands and knees. COVER your head and neck with one arm and hand. If a sturdy table or desk is nearby, crawl underneath it for shelter. If no shelter is nearby, crawl next to an interior wall (away from windows). HOLD ON until shaking stops." (USGS photo by HVO staff)

HAWAIʻI ISLAND - This week's Volcano Watch article focuses on earthquakes, large and small, and next week's Shake Out event. 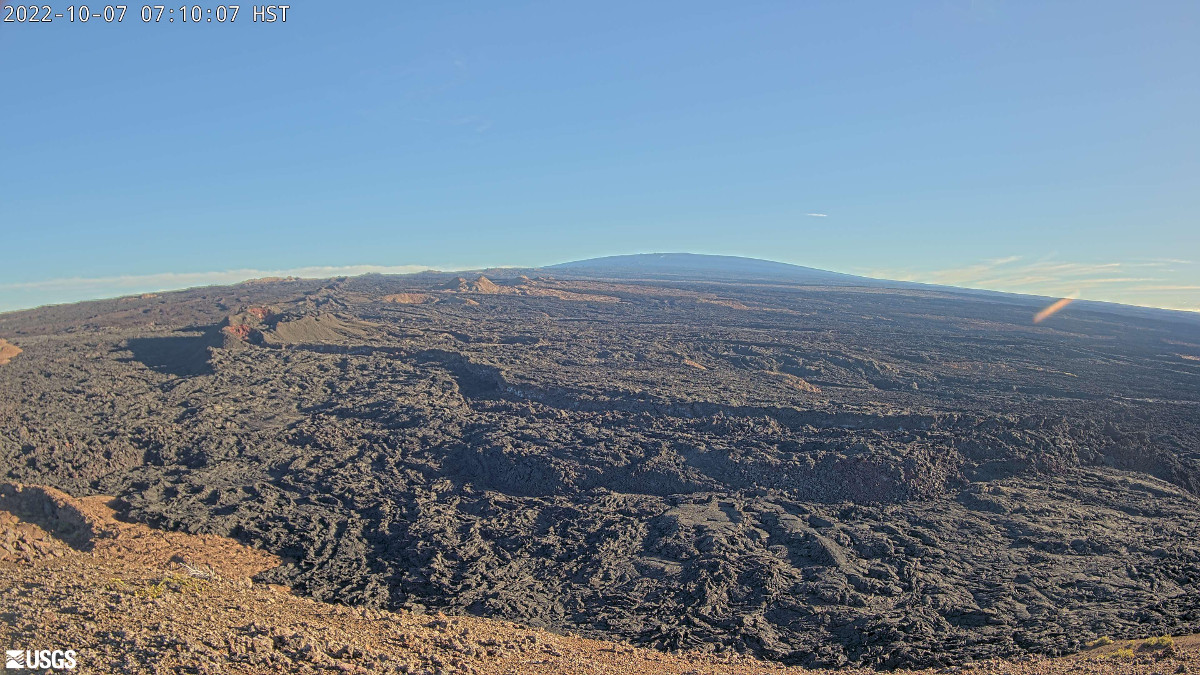 USGS: “This image is from a research camera positioned on a cone in Mauna Loa’s Southwest Rift Zone in Hawaiʻi Volcanoes National Park. The camera looks northeast (upslope), focusing on the middle part of the Southwest Rift Zone. The volcano’s summit is at upper right.”

(BIVN) – With Mauna Loa exhibiting heightened unrest, and the annual Great Hawaiʻi ShakeOut earthquake awareness event set for next week, scientists with the USGS Hawaiian Volcano Observatory have plenty to write about.

Feeling occasional earthquakes is part of the experience of living in the State of Hawaii, especially on the Island of Hawai‘i. The vast majority of felt earthquakes are small, but the less common large earthquakes can be damaging, so it is important to be prepared.

The U.S. Geological Survey Hawaiian Volcano Observatory (HVO) records tens of thousands of earthquakes beneath our islands every year. Luckily, most of these are less than magnitude-2, and are not felt. Over the past 30 years, Hawaii has had four earthquakes of magnitude-6 or larger. Three of them were deep (greater than 12 miles or 20 kilometers) and likely the result of the stresses brought forth by the Hawaiian Islands sitting on top of the Pacific plate. The most recent example was the magnitude-6.2 earthquake that struck 17 miles (27 kilometers) south of Nā‘ālehu, a few minutes before midnight on October 10, 2021.

The other one was a magnitude-6.9 on May 4, 2018, which is the largest earthquake recorded in Hawaii in the past 30 years. This event was much shallower (less than 9 miles or 15 kilometers) and was likely related to magma moving through the Kīlauea plumbing system at the start of the 2018 lower East Rift Zone eruption.

It is a bit of a chicken or egg problem, whether these large, shallow earthquakes under volcanoes lead to eruptions, or if it is the magma shifting stresses along faults that trigger earthquakes. These are two end-member hypotheses, and in reality, it is most likely a combination of both. Earthquakes and volcanic eruptions go hand-in-hand.

We see this kind of interplay between magma movement and seismicity with the ongoing swarm of earthquakes under Mauna Loa summit caldera (Moku’āweoweo) and the upper northwest flank. This elevated seismic activity is accompanied by slight ground inflation (or swelling), which suggests that the Mauna Loa magma reservoir is filling.

Does this mean that Mauna Loa will erupt soon? Not necessarily.

Mauna Loa has been in a period of prolonged unrest. The sleeping giant may just be snoring a little louder than it did a few years ago, but it does not necessarily mean that it will wake up soon.

Scientists at HVO look at many different monitoring streams to document changes in Mauna Loa’s behavior. Some of these changes may alert scientists when an eruption is more likely. Large shallow earthquakes are one of the indicators that move the probability of an eruption of Mauna Loa from “not necessarily” to “highly likely”. For example, a magnitude-6.7 earthquake happened a few months before the last eruption of Mauna Loa in 1984. The 1950 eruption was also preceded by a large earthquake, but only 2 days prior to the onset of the eruption.

However, not all Mauna Loa eruptions are preceded by large earthquakes. And some large earthquakes, such as the 1975 magnitude-7.7 Kalapana earthquake was not accompanied by a major eruption of Kīlauea volcano.

Large shallow earthquakes are not just a potential precursor to volcanic eruptions, but can be a disaster on their own. Damage done by large earthquakes can be mitigated to reduce the hazards and risks associated with violent shaking. Modern building codes make houses much more resistant to damage. Efforts like securing tall heavy objects to the wall so they are less likely to tip over and fall will reduce the likelihood of damage and injury when a large earthquake hits. Earthquake safety drills for “Drop. Cover. Hold On.” should be practiced regularly so that instinct kicks in when the initial shaking is felt.

Visit shakeout.org to sign-up and learn more about ways to prepare for large damaging earthquakes.