Images and video courtesy USGS and Lynn Beittel of Visionary Video. A synthesized voice was utilized in the narration for this story.

HAWAIʻI ISLAND - As of Thursday evening, the lava flow front is about 3.2 miles, or 5.2 kilometers, from the Daniel K. Inouye Highway, aka Saddle Road, while an eruption viewing traffic pattern has been established. 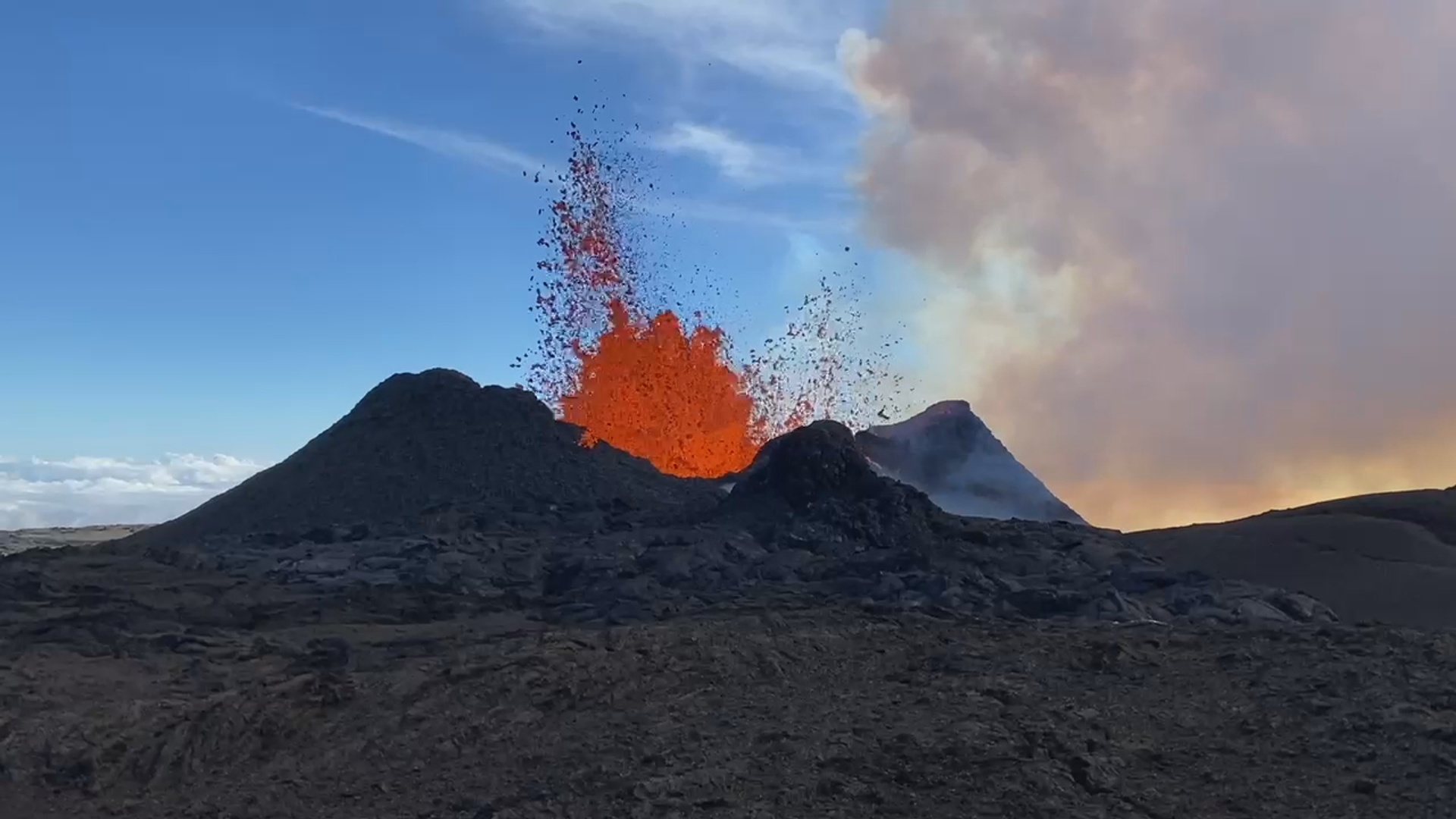 image from video of Fissure 3 by the USGS

(BIVN) – New video by the USGS shows the view from the ground at Fissure 3, erupting on Mauna Loa volcano’s Northeast Rift Zone. Scientists are collecting samples in this area, which will be analyzed to learn about lava that is flowing to the north, down the side of the giant Hawaii island volcano.

A new map published by the USGS Hawaiian Volcano Observatory on Thursday evening shows the progress the lava flows have made. 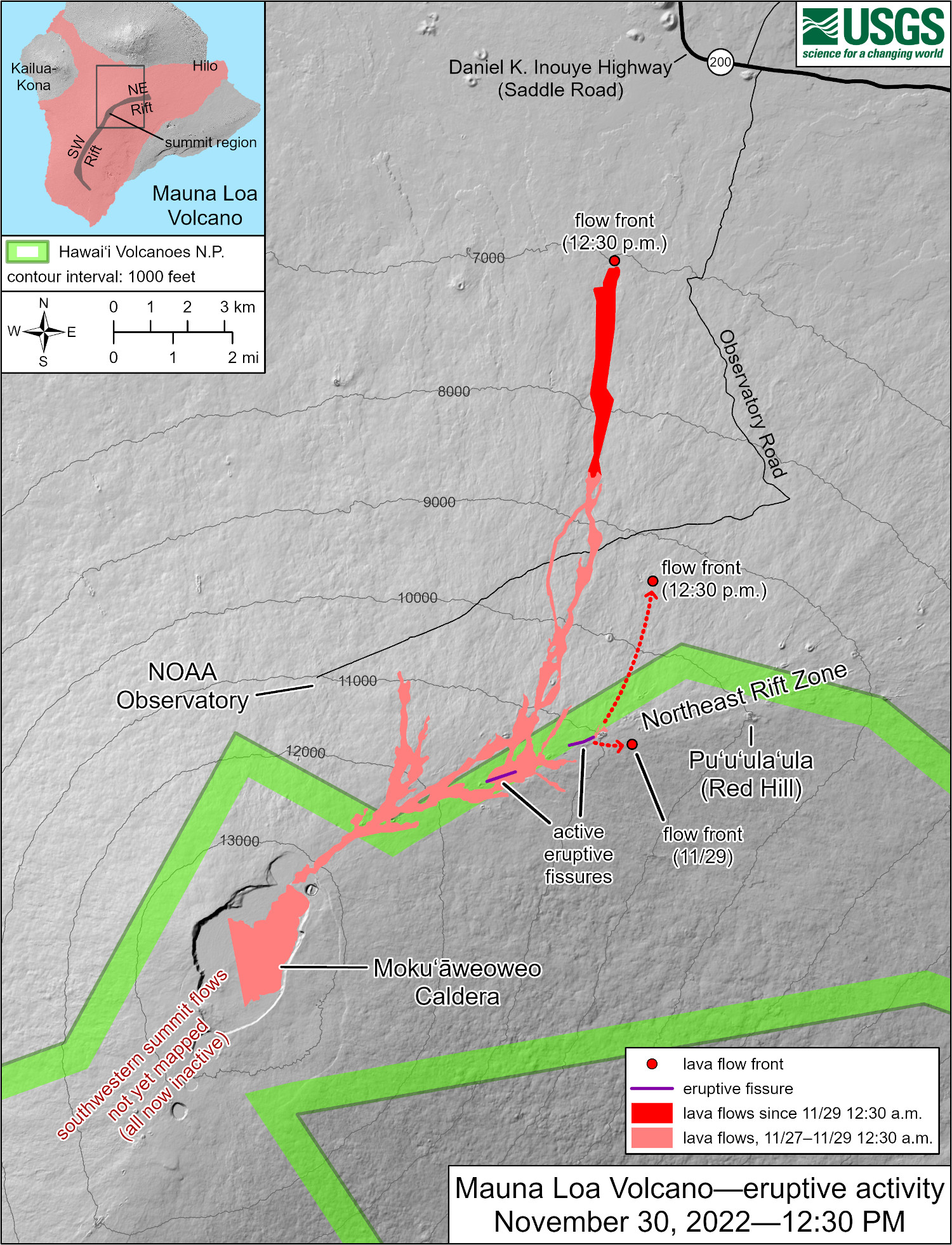 USGS: “The Northeast Rift Zone eruption of Mauna Loa has continued into its fourth full day. At this time two fissures are active, sending lava flows primarily to the north-northeast. Webcam and satellite views overnight allowed USGS analysts to accurately map some of the most active flows, displayed in red here, along with older flows further uprift and in part of Mokuʻāweoweo Caldera. Elsewhere the progression of the flows is marked by points for the flow fronts, mapped by HVO field crews.”

The flow front is about 3.2 miles, or 5.2 km, from the Daniel K. Inouye Highway, also known as the Saddle Road. The flow has slowed ever since it reached flat ground, and if it maintains its speed, scientists think it could be a week before the lava reaches the highway.

The map also shows the Fissure 4 lava flows that moved toward the northeast today. The small lobe that was moving to the east from the same fissure has stalled.

And here’s another map, produced by the County of Hawaiʻi, showing the new Mauna Loa eruption viewing traffic pattern established off the Daniel K. Inouye Highway. In an effort to get cars off the shoulders of the highway, this one-way route utilizes the old saddle road. The entrance located directly across from the Gilbert Kahele Recreation Area. Parking will only be allowed on the right side of the road and no vehicle can remain in the area for more than 90 minutes.

On Thursday, the Hawaii Department of Transportation announced it has reopened the second lane over a bridge on Hawaii Belt Road which was previously closed for repairs. The coastal highway will become a critical route for all traffic going from East to West, should the Saddle by blocked by lava.

Hawaiian Electric also said that it is making plans to reroute electricity if transmission lines on Saddle Road are lost.

The State Division of Forestry and Wildlife announced it has closed all hunting in the portion of Unit A of the Mauna Kea Forest Reserve and Game Management Area South. Finally, in Washington D.C., Hawaii Congressional Representatives Kaialiʻi Kahele (HI-02) and Ed Case (HI-01) sent a letter to President Joe Biden on Thursday, requesting his help to expedite federal assistance to help the State and County to mitigate the long-term impacts of the eruption, including assistance to farming and ranching operations affected by the volcanic gas emissions.