HAWAIʻI ISLAND - The USGS Hawaiian Volcano Observatory reports supply of lava appears to be much reduced Thursday morning, and the advance of the flow front has stalled.

USGS: “The Northeast Rift Zone eruption of Mauna Loa continues with a major change overnight. The fissure 3 (F3) vent continues to erupt but the supply of lava appears to be much reduced this morning. Lava is overtopping channels near the vent with flows extending no farther than 2.5 mi (4 km) from the vent. The channels below this point appear drained of lava and probably no longer feed the main flow front.” (USGS image by M. Patrick)

(BIVN) – A breakout on the lava channel at the 10,000 ft. elevation of Mauna Loa has drained the supply of lava to the flow front that was previously threatening the Daniel K. Inouye Highway.

“Lava is coming out at what appears to be a reduced production rate,” said David Phillips of the USGS Hawaiian Volcano Observatory, adding that the river of lava erupting from Fissure 3 on the Northeast Rift Zone is no longer organized into a major channel. “The flows are kind of just flowing out,” Phillips said.

Overnight, higher lava fountains were observed Fissure 3 before Thursday’s breakout. HVO geologist Frank Trusdell said one possible scenario for why the fountains were higher is that there could have been a “constriction where the lava was coming out of the ground, and that constriction – if the pressure is the same, but the aperture is smaller – you can drive the fountains higher into the air,” like a thumb over a garden hose.

“One other thought is from the historical record,” Trusdell continued. “Early on in Mauna Loa lava flows you have fissure vents and you have the production of ʻaʻā where the effusion rates are high. And three different historical eruptions went from ʻaʻā early in the eruption, and transitioned to pāhoehoe, and the pāhoehoe is moderate to low effusion rates. And so we may be in that transition. So one of the things that we’re doing is collecting molten samples, and the samples then give us inference as to whether or not we’re also transitioning from a high effusion rate to a moderate to low effusion rate.” 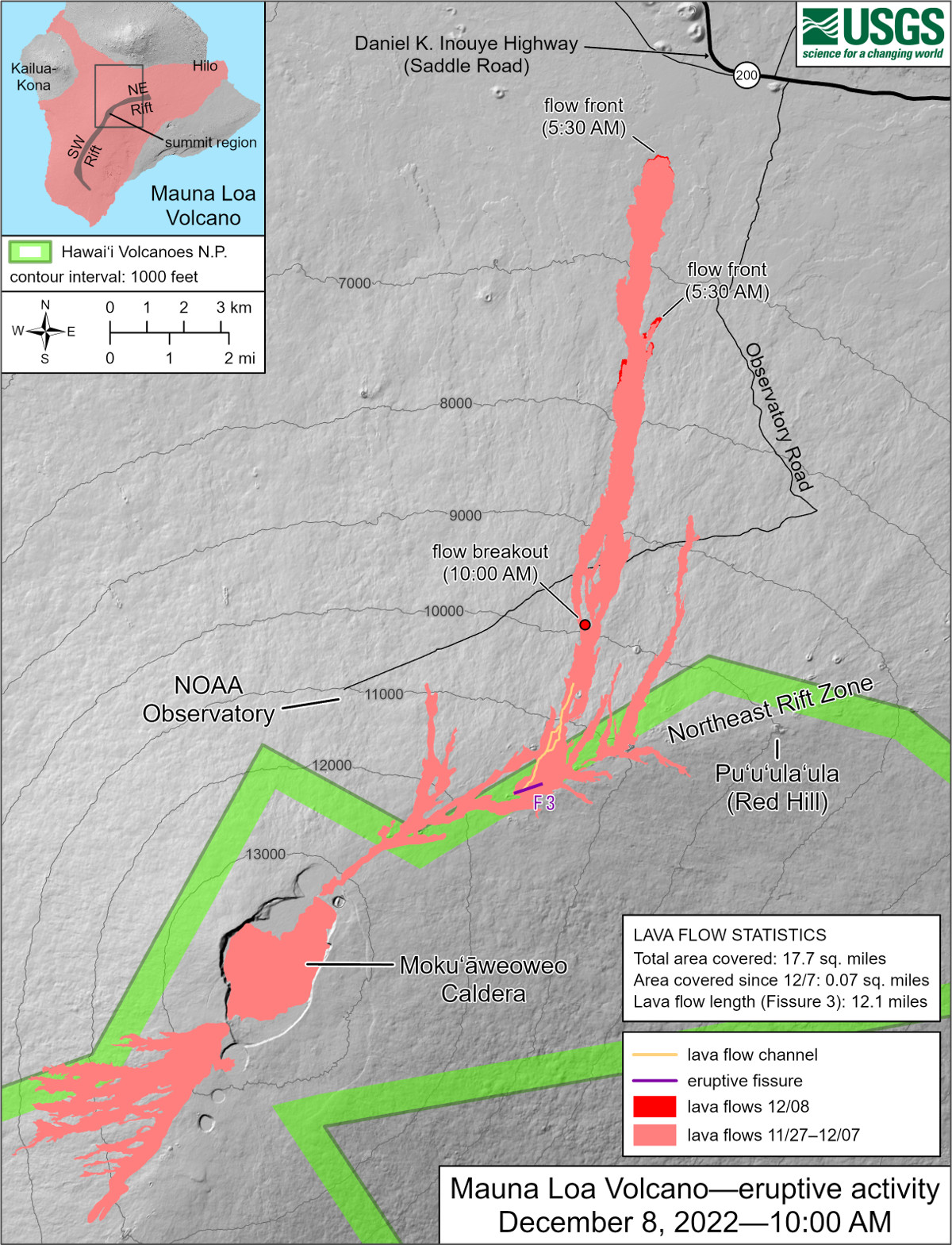 USGS: “The Northeast Rift Zone eruption of Mauna Loa that began the evening of November 27, 2022, continues as of December 8, 2022 (eleventh full day). One active fissure, fissure 3, feeds lava flows downslope to the north. HVO field crews and USGS analysts have accurately mapped some of the most active flows, displayed in red here, along with older flows further uprift, in part of Mokuʻāweoweo caldera, and in the upper summit region southwest of the caldera. Lava flow length was measured by tracing the continuous active channel shown in yellow here and then extending the measurement to the distal lava flow extent measured in satellite data.”

Hawaiʻi County Mayor Mitch Roth reminded the public that the Hawaiʻi Department of Transportation has prohibited parking on the shoulders of Mauna Kea Access Road due to fire concerns.

Hawaiian cultural advisor Dr. Noe Noe Wong-Wilson also explained the intentions behind a cleanup set for Friday around Puʻuhuluhulu, organized by the Mauna Kea Ohana and the Royal Order of Kamehameha. “When we are preparing for the arrival of Pele,” Wong-Wilson said, “it is a practice for many of us to prepare our homes, prepare the areas where we live, and to make sure that these areas are clean. That is just something that we we know occurred over the last several opportunities for Pele to come and visit in Puna, for example. So our Hawaiian families always do that.”

From the USGS Hawaiian Volcano Observatory at 8:48 a.m. HST:

The Northeast Rift Zone eruption of Mauna Loa continues with a major change overnight. The fissure 3 (F3) vent continues to erupt but the supply of lava appears to be much reduced this morning. Lava is overtopping channels near the vent with flows extending no farther than 2.5 mi (4 km) from the vent. The channels below this point appear drained of lava and probably no longer feed the main flow front.

As of 5:30 a.m. today, December 8, the flow front was stalled about 1.7 mi (2.8 km) from the Daniel K. Inouye Highway (Saddle Road). The lava flow is now inactive for most of its lower length, but the flow front may appear to advance a little as it settles.

Sulfur dioxide (SO2) emission rates of approximately 120,000 tonnes per day (t/d) were measured on December 4, 2022, and remain elevated at this time. Volcanic gas is rising high and vertically into the atmosphere before being blown to the west at high altitude, generating vog (volcanic air pollution) in areas downwind. The Hawaii Interagency Vog Information Dashboard has detailed information about vog. Forecasts for the dispersion of vog can be found on the VMAP Vog Forecast Dashboard.

Tremor (a signal associated with subsurface fluid movement) continues beneath the currently active fissure. This indicates that magma is still being supplied to the fissure, and activity is likely to continue as long as we see this signal.