We have a volcanic show... as we cover the historic loss of the final home in the Royal Gardens subdivision to lava... and the one year anniversary of the Kamoamoa fissure eruption, the most spectacular geological moment on Kilauea in 2011. 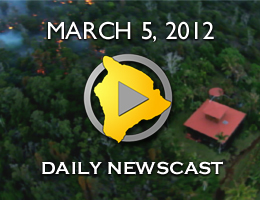 EDITOR’S NOTE: The Hawaii County Civil Defense message for this date has expired

We have a volcanic show… as we cover the historic loss of the final home in the Royal Gardens subdivision to lava… the final hours at Jack Thompson’s famed Lava House. Plus, today happens to mark the one year anniversary of the Kamoamoa fissure eruption, the most spectacular geological moment on Kilauea in 2011.

The house of Jack Thompson, the last remaining resident of the Royal Gardens subdivision, is no more.

On Saturday, Thompson surveyed the burning wreckage on his property where, 24 hours earlier, his home once stood.

It is the latest and last structure to be claimed to Madame Pele in this doomed subdivision. One by one, over the course of nearly three decades, all of Thompson’s neighbors have lost their homes to lava flows coming from the Pu’u O’o crater on Kilauea’s east rift zone.

It was in March 1983 when the first house in Royal Gardens wa claimed by lava.

According to the Hawaiian Volcano Observatory, its no surprise that Royal Gardens is a frequent destination for lava flows. Like many of Puna’s large subdivisions, it was the product of a speculative development spree that began in the late 1950s. Supported by both state and county officials, developers laid grids of substandard streets across vast tracts of land with no thought to sustainability, topography, or natural hazards.

Royal Gardens, in particular, holds the record as the steepest subdivision on the volcano. Its streets run straight up Pulama pali, rising 1,400 vertical feet.

Still, few could have envisioned the destruction that would come, based on the eruptive activity at the time.

Royal Gardens was heavily advertised on the mainland, and an estimated half to two-thirds of the lots were bought sight unseen. By the time the current eruption began, most of the 1,500 lots in Royal Gardens had been sold, but fewer than 75 houses were built.

One of those houses belonged to Thompson, and he recalls the day he finished up work on his house in 1983, the same day the Pu‘u ‘O‘o-Kupaianaha eruption began.

The eruptive events afterwards wiped out the rest of the homes in the subdivision, but somehow Thompson’s residence survived. Eventually, all access to his property was lost, as the volcano claimed the streets and forests surrounding his property. In recent years, Thompson has had to backpack his way in, and has even hitched rides with tour helicopters, to get to his house.

The so called “Lava House” became a remote tourist destination, and attracted lava enthusiasts from on and off the island.

In fact, Paradise Helicopters was in the initial phase of completing a required environmental assessment in order to legally land on the property in order to conduct tours with Thompson.

Thompson became a local legend – especially amongst fellow lavatics – known as the “last man standing” in Royal Gardens, refusing to give up in the face of the destruction that miraculously avoided his home, time and again.

But Thompson’s luck ran out on March 2nd… when a fast moving lava flow invaded the forested kipuka surrounding his home.

Hilbert was in the subdivision in December, filming a dramatic flow that once again narrowly missed the Thompson house, as it has so many times before.

But it seemed like something might be different this time, based on the direction of the latest lava flow.

Still, Hilbert’s video shows Thompson on Thursday, relaxed on his porch where he has watched every coastal lava flow since the current eruption began.

The remaining forest around Thompson’s home burned in the evening hours, but Jack remained defiant.

The two men got little sleep that night.

By the next day, Thompson still seemed to hold on to the hope that the lava would be pulled down the sloping Hoku street 300 feet to the east of his house.

But as the day progressed, Hilbert says it became abundantly clear that one strong finger of the flow front had invaded the deep forest directly behind and above his home, and was following a trench that leads directly to his backyard.

It was then that the reality of the situation began to set in… this would probably be the last moments Thompson would enjoy in his home.

Despite the emotion of the moment, Thompson remained true to his character, appearing calm and collected as he and Hilbert prepared to evacuate.

Just before dark, the cavalry arrived: Paradise Helicopters to the rescue.

On board, vulcanographer Mick Kalber… who captured these images of Jack getting ready to leave his home for the last time… All the while, lava inching ever closer to the home.

Thompson grabbed whatever belongings he could fit into the helicopters, and as the sun set, “Lava” Jack Thompson left his Royal Gardens home for the last time.

According to residents of Kalapana Gardens, who could see the remote area clearly from 3 1/2 miles away, lava overtook and destroyed Jack’s house an hour and a half after the helicopters flew away from the scene.

One day later, this is all that was left of Jack’s Lava House. Helicopters returned on Saturday evening, as Thompson returned to his property to see the devastation he has avoided for decades, with his own eyes.

Thompson took a walk around the area, with hot lava still burning on the property and cascading down the cliffs. As he surveyed the site, Thompson reflects on his legendary stand.

“I dont think anyone will be living up hear anymore, ” Jack said.

March 5th also marks the day – one year ago – when the Kamoamoa fissure eruption captivated the world. Tim Bryan takes a look back.

Although Hawaii always strives to provide a good visitor experience, the current economic climate means government will not be able to provide everything it would like to. For example, one program facing the chopping block that directly relates to lava tourism… the county run Lava Viewing area in Kalapana.

Its a sign of the times… for the forth year, the mayor is looking at reducing the size of government, due to declining property tax revenues.

We caught up with the mayor last Thursday to discuss the spending plan, via teleconference.

Puna, part of the extended Keliihoomalu Ohana of Kalapana, and a constant at Uncle Robert’s Awa bar, passed away on February 16th at the age of 45. Along the way, he touched many visitors and residents with his aloha.

Roland Joseph Torres filmed this video in Kaimu in the summer of 2009, showing Keliihoomalu doing what he will always be remembered for… sharing his music and his love for this special place.