The encampment across from the Maunakea Visitors Center continues, Canada pledges money for TMT, and celebrities kokua.

UPDATE: At about the same time news of Governor David Ige’s announcement began to circulate (below), the Mauna Kea Access Road was closed at the Visitor Information Station due to snow flurries and ice forming on the summit area.

UPDATE: Since we published this article this morning, we have received official confirmation from the office of the governor that construction of the Thirty Meter Telescope project has been put on hold for one week. Governor David Ige issued this statement regarding Mauna Kea and the Thirty Meter Telescope following an announcement made during a media conference on Oahu.

Today I announced a week-long stand down of construction on the Thirty Meter Telescope so I can evaluate the situation from multiple perspectives. Mahalo to TMT for its willingness to pause its activities during this time. I also thank UH President Lassner and Office of Hawaiian Affairs Chair Lindsey for their leadership on this issue. I will continue to work with them in the coming days.”Governor David Ige on April 7, 2015

Its been over a week since the first Thirty Meter Telescope vehicles were blocked from the summit of Mauna Kea. On Tuesday, the Protectors of Maunakea continued their nearly two week-long encampment across from the Maunakea Visitors Center at approximately 9,200 feet elevation, day and night. Last Thursday, 31 people were arrested in connection with the blockade of the $1.4 billion observatory. However, the incident only strengthened the resolve of the protectors, who attribute a state-wide surge in support to their adherence to kapu aloha. In a statement released on Tuesday, Lanakila Mangauil said “abiding by this is what has fueled and protected us in this movement.” Mangauil said the kapu aloha is about “conducting oneself with respect towards others, under any and all circumstances.”

No construction has taken place since the day the arrests were made. The protectors plan to keep a constant presence on the mountain, while attempting to garner more support. 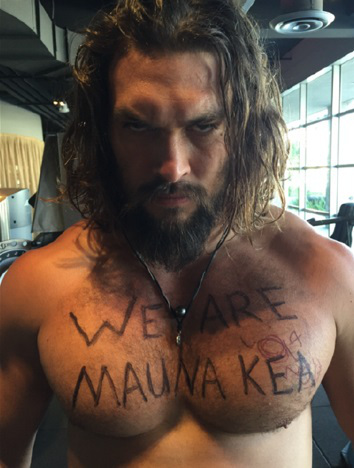 Joining the protectors’ effort were Hollywood actors Jason Momoa and Kala Alexander, as well as world-renowned surfer Dustin Barca. Barca was among those arrested Thursday.

Momoa dove head-first into the action, uploading numerous photos to his Instagram account, rallying support, and even reaching out to Dwayne “The Rock” Johnson for his support. The Rock was on the island recently. The image of Momoa (above right) was emailed to us by the protectors.

Rumors have been circulating that state and county leaders may be negotiating a one or two week moratorium on construction, but as of Tuesday morning those rumors remain unsubstantiated.

UPDATE: Following a news conference on Oahu, the governor told news reporters that the state will enact a “timeout” lasting about a week in order to hold “meaningful discussions” with groups that have an interest in the telescope. (SOURCE: Honolulu Star-Advertiser)

TMT is “assessing its work schedule on a day-to-day basis”, spokesperson Ross Wilson told the Hawaii Tribune-Herald on Monday.

The blockade happens to coincide with the Merrie Monarch Festival in Hilo, one of Hawaii’s biggest cultural events. The Mauna Kea Hui of Protectors hope some of the worldwide attention given to the hula competition will translate into global awareness for what is happening on the mountain.

A number of halau hula (hula groups), on island for this week’s annual Merrie Monarch Festival, came up Sunday to pray, dance and make hoʻokupu (offerings) at our ahu kupuna (revered elders shrine) at Puʻu Huluhulu, located near the access road to Mauna Kea.Mauna Kea Hui of Protectors

Supporters of the blockade plan to wave signs at the entrance of the Hilo airport and also plan to march under the Aloha Aina banner in Saturday’s Merrie Monarch Royal Parade.

Canadian Prime Minister Stephen Harper announced on Monday the Government of Canada’s intention to provide significant support for the Thirty Meter Telescope – reported to be $243.5 million over 10 years.

According to a media release posted to the Prime Mininster’s website:

The majority of the Government’s support for the TMT will be spent in Canada, creating high-quality jobs related to the construction and assembly of key telescope components, including a precision-steel enclosure by Dynamic Structures Limited, based in Port Coquitlam, British Columbia, and cutting-edge adaptive optics technologies, to be developed by the National Research Council in partnership with Canadian companies. As part of the project, dozens of Canadian businesses are expected to develop advanced capabilities and products transferable to future applications in the health, defence and telecommunications sectors – helping to create and maintain high-quality jobs in communities across Canada.

Canada’s contribution will also secure a viewing share for Canadian researchers at the TMT once it is operational in 2023-2024. This access will help to maintain Canadian scientific leadership in astronomy, paving the way to important scientific discoveries and helping to train highly-qualified personnel at post-secondary institutions across the country. Canada’s pursuit of new scientific discoveries will also help spark young Canadians’ interest in science disciplines for decades to come. Prime Minister Stephen Harper media release

It was a pleasure today to announce the Government’s support for the Thirty Meter Telescope project. This revolutionary facility has the potential to transform astronomers’ understanding of the universe. Our Government is proud to be an official partner in this important project and to be contributing to science that will advance Canadian and international scientific discovery.” Prime Minister Stephen Harper

Big Island Video News has delved into the protectors’ reasons for the TMT blockade in the past. On Monday evening, we published a video taking a closer look at the possible international ramifications of the project.

On Tuesday, the Protectors of Maunakea issued a media release putting their reasons into writing:

Protectors of the mountain have many reasons why they oppose the proposed construction of the TMT, one being that the mountain is considered sacred and perhaps the most sacred lands in all of Hawaiʻi. The mountain is named after Wākea who mated with Papahānaumoku to birth Hawaiʻi Island. The peak of the mountain is considered to be wao akua, or the realm of the gods, as it is the dwelling place of gods and goddesses such as Poliahu, Waiau, Lilinoe, Lihau, Kukahauula, Kahoupokane and Mooinanea. Another reason for the opposition to the TMT is the fact that protectors feel that the TMT does not adhere to the developmental laws of conservation lands as determined by the State of Hawaiʻi and the mountain also contains many religious shrines as well as burial sites and sits on top of the largest aquifer on the island of Hawaiʻi and therefore they consider it to be desecration. Lastly, the protectors realize and understand that even if the TMT was in compliance with the laws of developing on conservation lands, the State of Hawaiʻi is illegal and the Hawaiian Kingdom was never lawfully annexed by the United States of America and therefore continues to exits today according to International Law. This stems from the fact that Americaʻs only claim to annexing Hawaiʻi is by Joint Resolution on July 7, 1898, which is really just a domestic law having no authority outside the boudaries of its territory, and Hawaiʻi clearly was not a part of the U.S in 1898 since it required annexation. Because the State of Hawaiʻi is illegal, the protectors argue that every extension and branch of the State is therefore also illegal and due to this, all contracts between the contractors and the State of Hawaiʻi are void and illegal. Protectors of the mountain call upon all countries involved to honor the continued independence of Hawaiʻi that America has refused to acknowledge for the last 122 years while illegally occupying Hawaiʻi in violation of the laws of occupation. Protectors of Maunakea on Tuesday

The hui is also clarifying the proper channels for donations and fund raising.

The protectors of the mountain know that there are many out there who have and continue to offer their support through donations of food, water, money and other neccesities, and while appreciated, those atop the mountain humbly and respectully ask that any attempts of raising funds and collecting and delivering donations be communicated first with the protectors so as not to mismanage resouces and cause confusion amongst the people in regards to what certain funds and donations could be used for. Protectors of Maunakea on Tuesday

We canʻt thank everyone enough. The amount of support we have received over the past week is absolutely unbelievable and simply amazing. I am not quite sure our people have seen a movement like this in their lifetime and I think itʻs a testament to the fact that our people have been ignited and are ready to move forward and resolidify ourselves throughout the world as a people and a country.” Kahoʻokahi Kanuha