A new dengue fever risk map shows the Captain Cook area of South Kona has been downgraded from "red" - or high risk - to "orange" - or moderate risk for acquiring the mosquito-borne disease. 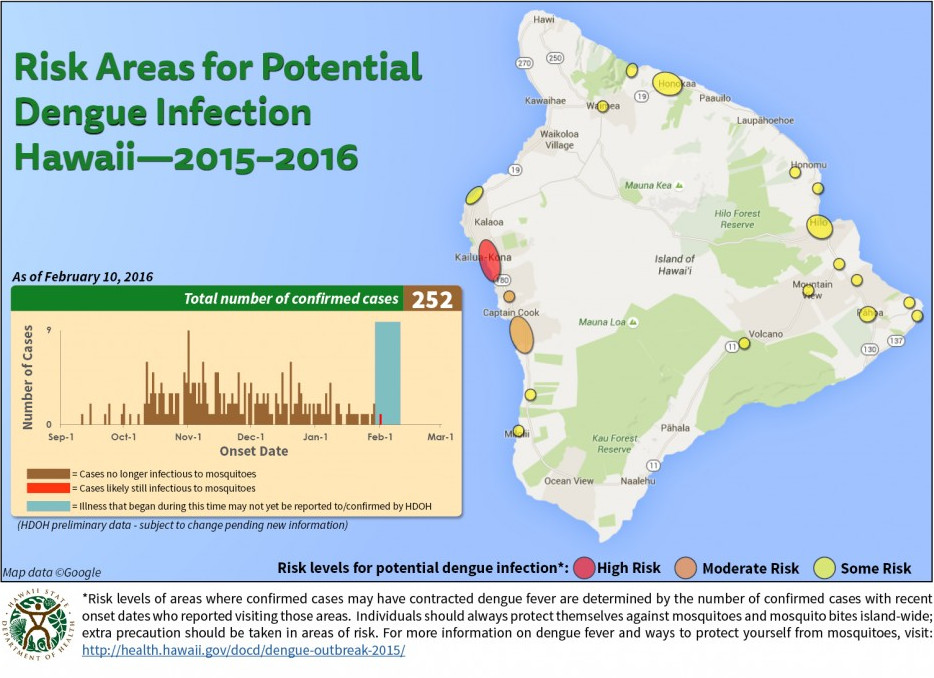 HAWAII ISLAND – A new dengue fever risk map shows the Captain Cook area of South Kona has been downgraded from “red” – or high risk – to “orange” – or moderate risk for acquiring the mosquito-borne disease.

The Hawaii Department of Health released the new map on Wednesday, along with a statement saying there were no new cases of dengue fever reported on Hawaii Island today. The number of confirmed cases tallied since the outbreak began in September remains at 252.

Currently, there is one confirmed case that is potentially infectious to mosquitoes, the state says, while the remaining 251 are no longer infectious. However, health officials note that “still-infectious mosquitoes may remain in the area, so even if the number of potentially infectious people drops to a few cases or zero, there is still a risk of dengue infection because the dengue virus is passed from mosquito to human, not human to human.”

“Fight the bite” preventive measures remain crucial, the state says, even if there are only a few confirmed cases that are still infectious.

On February 8, Hawaii County Mayor Billy Kenoi proclaimed a state of emergency due to the spread of dengue fever. Governor David Ige later issued a statement saying the state will not follow suit, and instead explained the criteria that would have to be met in order for the state to declare an emergency at the state level.

On February 9, the Hawaii Tourism Authority issued a statement saying “travelers should not be alarmed by the County of Hawaii’s state of emergency declaration for Hawaii Island or allow this decision to alter their travel plans to any of the Hawaiian Islands. This declaration is a good strategic move by the County of Hawaii, as it will provide government officials with additional funding and resources to eliminate dengue fever from Hawaii Island.”

HTA added, “it’s important to note that no health organization has advised against traveling to the Hawaiian Islands at any time since the outbreak of dengue fever began on Hawaii Island. Travelers should also take note that Hawaii Governor David Ige has chosen not to issue a statewide emergency proclamation since none of the conditions for doing so have been realized.”

The Captain Cook area of South Kona has been under the “red bubble” since the Department of Health first began publishing the dengue fever risk map in November 2015. This is the first time the area has been relieved of the high risk status, but not every Hawaii Island resident is satisfied with the DOH risk map.

“In my opinion, much of the information they provide is either vague or seems to be slanted to downplay the severity of the situation,” wrote Matt Binder on the Hawaii Dengue Awareness Facebook page. Binder says these “bubble maps” are “so confusing that I suspect that very few employees of the DOH can explain their meaning. (I spoke with three DOH public educators.

“One told me that the maps were, ‘based on a bunch of data plus our interpretations.’ That’s fine, but they refuse to tell the public what specific data sets they use or what methods they use to interpret the data.) These maps are not standard in the public health field – they are the creation of our DOH. Our county civil defense, on the other hand, is presenting real data in their maps so that people can easily visualize the information. Bob Martin is further enhancing our understanding with his maps. But, it seems, the DOH would rather give us near-meaningless, Bush-era, colored bubbles,” Binder wrote.