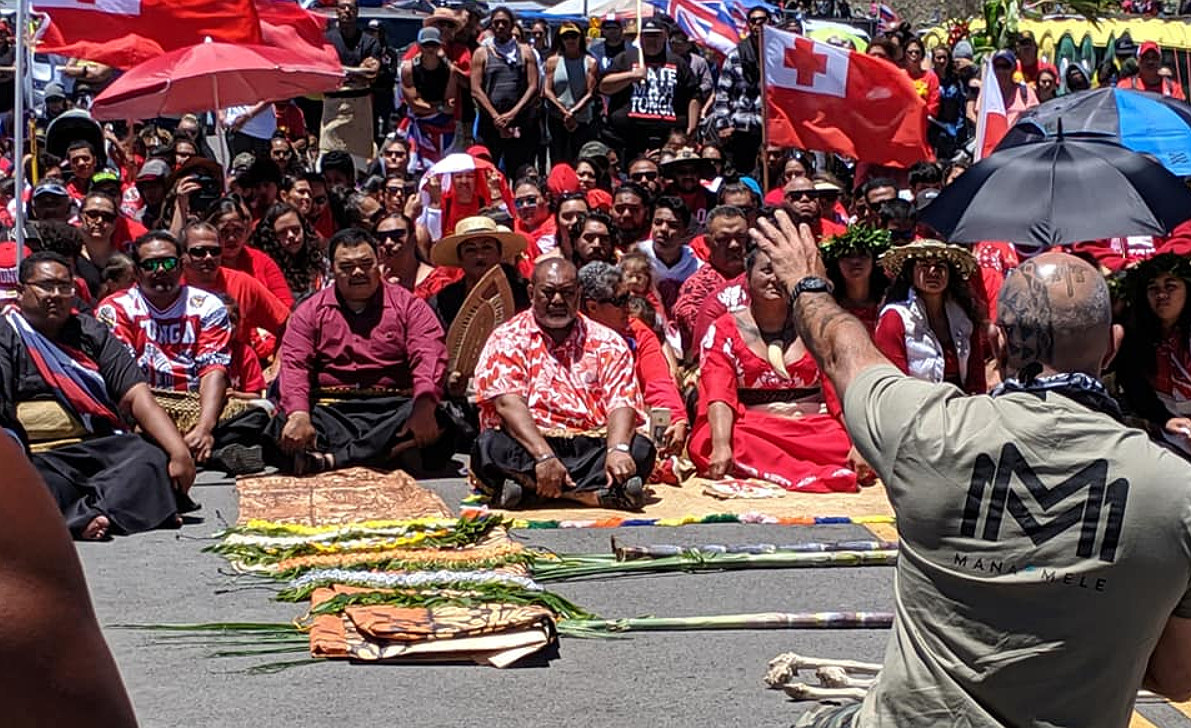 MAUNA KEA, Hawaiʻi - Today is Day 11 since the scheduled start of construction for the Thirty Meter Telescope on Mauna Kea. The mountain access road has been closed ever since.

The state has pinned its hopes for a peaceful resolution to the Mauna Kea conflict on Hawaiʻi County Mayor Harry Kim. On July 23, Governor David Ige asked Mayor Kim to “coordinate both county and state efforts to peacefully attempt to reach common ground with the protectors of Maunakea and the broader community.”

Negotiations are underway. It has been reported that Mayor Kim has offered his assurance to Thirty Meter Telescope opponents that construction on the observatory will not start if the kiaʻi agree to clear the encampment on the Mauna Kea Access Road.

UPDATE: During a Thursday press conference held just after noon, Kahoʻokahi Kanuha said Mayor Kim’s proposal was delivered to him through a third party, and was not entirely clear. Kanuha said no one is leaving the Mauna Kea Access Road, nor the Puʻuhonua o Puʻuhuluhulu, until someone from the state – and more importantly, the TMT – can assure them that the telescope will not be built on Mauna Kea.

Media communications about Mauna Kea have also transitioned to the office of Hawaiʻi County Mayor Kim. “Media Advisory #21”, issued at 5:10 p.m. Wednesday evening, was the final advisory issued be the state team that has been on the scene since the first day of the scheduled TMT construction.

On Wednesday, the Hawaiʻi Department of Transportation affirmed it will continue to support the joint operations on Maunakea, with a primary mission to “ensure the safety of everyone on the roads leading up the mountain—drivers, protestors, astronomers, and contractors alike.” the DOT reported:

HDOT has placed signage, cones, and barriers to make motorists on the high-speed facility aware of pedestrians and law enforcement at the base of Mauna Kea Access Road. We have also suspended all lane closures on the alternate route through Hamakua (Hawaii Belt Road) to facilitate travel for those needing to go between east and west Hawaii.

HDOT supports the legal right of TMT to construct as the project has been approved through the state’s procedures and rules, including the Final Environmental Impact Statement published in May 2010, the Hawaii Supreme Court decision in December 2015 vacating the Circuit Court’s May 2014 judgment, and the September 2017 findings of the second contested case hearing.

HDOT will continue to work with law enforcement to address illegal actions by protestors on neighboring islands to impact the daily lives of commuters on other state roads such as the H-1 Freeway. We understand that there are many perspectives on the state’s involvement in the facilitation of the construction of the Thirty Meter Telescope and respect the rights of community members to exercise their freedom of speech in a peaceful, legal manner.

After hearing hours of testimony that illustrated the deep divide in the community over the project, the Hawaiʻi County Council on Wednesday voted to pass Resolution 233-19, introduced by councilmember Maile David. The resolution strongly urges Governor David Ige and Mayor Harry Kim to honor the request of Hilo’s State Senator Kaialiʻi Kahele calling for a 60-day “moratorium on the construction of the Thirty Meter Telescope on Mauna A Wakea”.

There was passionate testimony for and against the Council resolution. We will be posting a video summary showing many of the statements later today.

Hollywood actor and former WWE champion Dwayne “The Rock” Johnson made a surprise visit to Mauna Kea on Wednesday, where he met with the leaders of the opposition to the Thirty Meter Telescope.

“I’ve been following this for years now,” The Rock told reporters, “but when you come here to Mauna Kea you realize it bigger than a telescope. It’s humanity. It’s a culture. It is people, Polynesian people, who are willing to die here to protect this land. This very sacred land.”

A delegation of Tongan community members made an impressive show of support on the Mauna Kea Access Road on Wednesday.

The Tongans held a prayer service before presenting traditional kava, sugarcane, Tonga tapa cloths and mats to the kiaʻi.

On Tuesday, a three-judge panel in Neves v. Ige issued a temporary order allowing Neves, and only Neves, to access Mauna Kea while the emergency proclamation remains in effect.

According to the NHLC:

Kumu Neves, who lives on Hawai‘i island, filed his lawsuit to protect the constitutional rights of Native Hawaiians and the public to access Mauna Kea; rights the Governor’s Proclamation violates. On Friday, July 19, 2019, Kumu Neves, through his attorneys at the Native Hawaiian Legal Corporation, asked the Court to temporarily suspend the Governor’s Proclamation in its entirety until a second hearing on whether to issue a preliminary injunction was scheduled. The temporary order issued Tuesday (7/23) allows Kumu Neves to access Mauna Kea until that hearing. If a preliminary injunction is then granted, it may operate to prevent the Governor from enforcing the Proclamation until Kumu Neves’ underlying lawsuit is decided.

While Tuesday’s temporary access order is a favorable one, its application to Kumu Neves alone offers limited relief. The order is the first of many rulings to be made in this case.

Dr. Andy Adamson, the Hawaiʻi Site Associate Director for Gemini Observatory, reported this resolution to a situation that occurred the day before on Mauna Kea:

Less than 24 hours after having been denied access to fix a critical issue at the Gemini telescope, two technical staff were able to successfully gain access to the summit facility at approximately 10:00 p.m. Access assurances from activists were offered in advance through law enforcement and the Office of Maunakea Management, provided the observatory could send its technicians immediately.

Observatory personnel were notified at approximately 9:00 p.m. on Tuesday, July 23 that a window of time for road access had been offered, extending only overnight. After risk assessment and careful consideration, Gemini leadership elected to send the two-person crew to attempt the technical work. The crew departed from the Hilo base facility at approximately 10:00 p.m. and successfully entered the Maunakea Access Road at the base of Maunakea at 10:45pm.

Gemini Observatory uses compressed helium – a non-toxic inert gas that exists in the atmosphere naturally – in a cooling circuit to maintain stable low temperatures for two highly-delicate instruments used in astronomical observations. The cooling system needed urgent repair, which required specialized technicians to shut down in order to prevent damage to the instruments and the cooling circuit itself.

The small crew successfully executed their plan to shut off the compressors, shut down and start warming up the two at-risk instruments, disconnect specific joints in the cooling system, and perform a standard facility inspection that is usually conducted on a daily basis during normal operations. The crew concluded their work just after 2:00 a.m. and returned to Gemini’s Hilo base facility after 3:00 a.m.

The Observatories hope to return as soon as possible to long-term reliable access to our facilities so that we can resume operations and safely return to scientific observations each night. We are grateful to law enforcement for facilitating safe access for this critical repair work, preventing significant damage to the complex instruments. We are proud of and grateful for the efforts of the two observatory personnel who completed the delicate technical work under such unusual conditions.