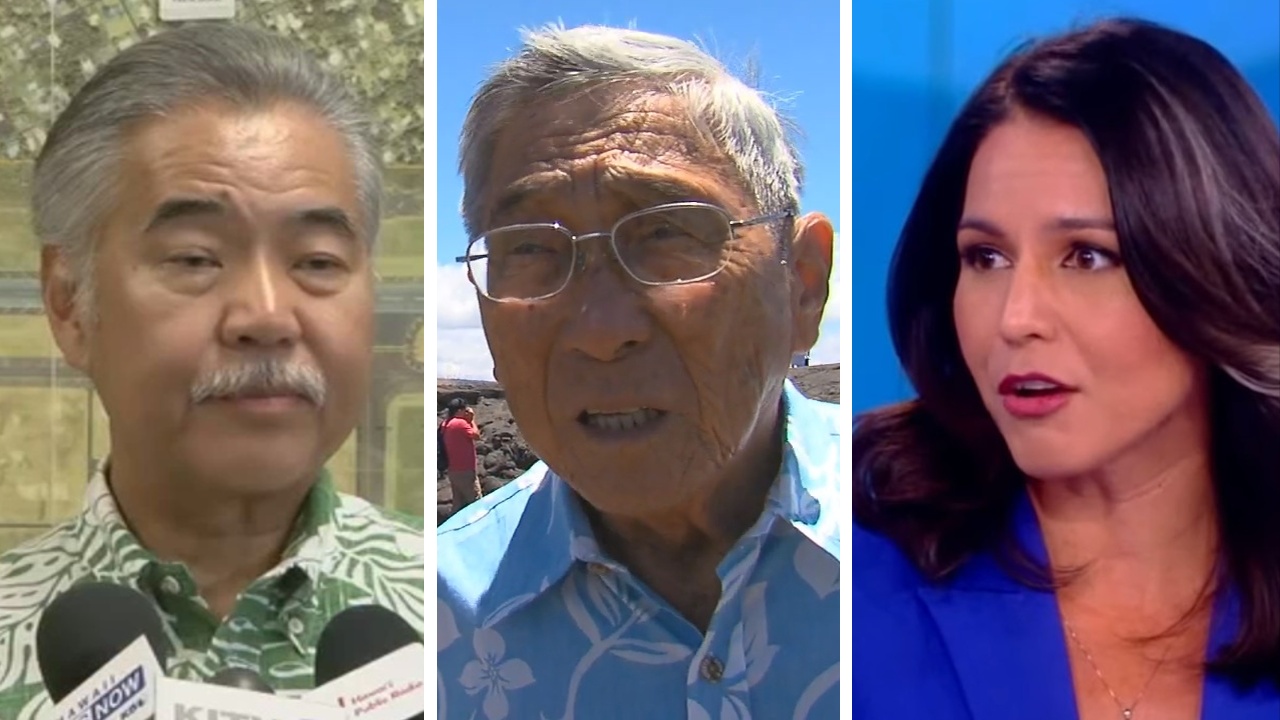 MAUNA KEA, Hawaiʻi - Mayor Harry Kim says he has no authority to make any kind of deal regarding the Thirty Meter Telescope, as Congresswoman Gabbard issues a new statement.

(BIVN) – For the first time since Govrnor David Ige turned to Hawaiʻi County Mayor Harry Kim to “coordinate both county and state efforts to peacefully attempt to reach common ground with the protectors of Maunakea and the broader community,” the mayor has issued an official statement in regards to the scope of his efforts.

UPDATED: Earlier today, it was reported that Mayor Kim offered his assurance to Thirty Meter Telescope opponents that construction on the observatory will not start if the kiaʻi agree to clear the encampment on the Mauna Kea Access Road. One of the leaders in the Ku Kiaʻi Mauna movement, Kahoʻokahi Kanuha, answered that no one is leaving the Mauna Kea Access Road, nor the Puʻuhonua o Puʻuhuluhulu, until someone from the TMT International Observatory can assure them that the telescope will not be built on Mauna Kea.

UPDATE: According to Kanuha, Kim’s offer was made – apparently – through a third party. But on Thursday evening, the mayor’s office said “there was no deal or offer from the Mayor to any party,” and reports that an offer was made through a third party are inaccurate, they said. “We have no idea where that whole thing came from, but it was not us,” said Kim’s executive assistant Janet Snyder, who has taken over handling communications on the subject.

The Office of the Mayor issued this news release on Thursday afternoon:

Hawai‘i County Mayor Harry Kim wants to take this opportunity to clarify the scope of his work to mediate the situation regarding the Thirty-Meter Telescope (TMT) and Mauna Kea.

The Mayor said on Thursday that he has no authority to intervene or make any kind of deal regarding TMT; his role is to work with all sides to find a better way forward for everyone concerned. The Mayor expressed his heartfelt wish to get the parties to find common ground and to achieve a peaceful resolution for the sake of all.

“I’m here to see where we can go, and I’m hoping we can establish a relationship so we can all join hands together, to move forward to making it better,” Mayor Kim said.

The specialness of Hawai‘i Island as a small community whose people are all ‘ohana gives the Mayor hope that we can come together.

The Mayor said his first important task is to ensure the safe flow of traffic on the Daniel K. Inouye Highway (aka Saddle Road), and the safety of both protectors and the general community as they travel on the highway.

“The traffic flow on the Saddle Road, the ingress and egress, is what I’m trying to address. My job is to coordinate the safety of everybody,” the Mayor said.

While no one can change the past, now is the time for leaders to build a new, just path for the future. As we approach the end of week two of the standoff at Mauna Kea, I urge you to deactivate the National Guard, withdraw the emergency declaration, and delay any new construction.

While the legal process has determined that the Thirty Meter Telescope project may proceed, there are spiritual and cultural issues that have not been addressed. This is about something much greater than one telescope project — it has to do with longstanding history on Mauna Kea, broken promises, desecration of sacred land and disrespect for native culture.

The kiaʻi have shown that they are paʻa in their commitment to protecting Mauna Kea. No show of force can overcome the power of aloha ʻāina spanning multiple generations chaining themselves to cattle guards, kūpuna prepared to be arrested as many times as it takes, and thousands of protectors holding strong to kapu aloha keeping the entire situation peaceful.

Trust must be earned — it is wrong that our legal process approved the development of a new telescope on a new site on Mauna Kea, without first ensuring the timely removal of facilities identified for decommissioning, removal, and restoration of those sites. This failure and a history of broken promises has resulted in the standoff that we are seeing today, and the lack of trust that government promises to respect the ʻāina and sacred places will be kept.

Governor Ige, the seal of the state you represent contains the phrase, “Ua mau ke ea o ka ʻāina i ka pono.” The life of the land is perpetuated in righteousness. Kauikeaouli made this proclamation in 1843 on Lā Hoʻihoʻi Ea, when righteousness was restored to the Hawaiian Kingdom. This shouldn’t be just a slogan. It must be our way of life.

You have before you an opportunity to start down a new, pono path for the future. I urge you to immediately deactivate the National Guard, withdraw the emergency declaration, and delay any new construction while you bring leaders together from both sides in the spirit of aloha to hoʻoponopono and determine the best path forward.

I understand that you have delegated some of this work to Mayor Harry Kim. If I or my office may be of any assistance in these efforts, please don’t hesitate to reach out.

With aloha for our ʻāina and our people,

UPDATE: The Office of Hawaiian Affairs today approved a resolution that calls on Gov. David Ige to rescind his Emergency Proclamation for Maunakea and authorizes the OHA administration “to advocate for the rights, safety and well-being of Native Hawaiian protectors and provide related-assistance as appropriate.”

The OHA Board of Trustees today approved a resolution that calls on Gov. David Ige to rescind his Emergency Proclamation for Maunakea and authorizes the OHA administration to advocate for the rights, safety and well-being of Native Hawaiian protectors and provide related-assistance as appropriate.

“Our hearts go out to our beneficiaries peacefully demanding the protection of Maunakea,” said Trustee Dan Ahuna, chair of the OHA Board’s Ad Hoc Committee on Maunakea. “Regardless of your position on the Thirty Meter Telescope, we all want the same thing: to mālama the mountain. Unfortunately, the state and the University of Hawaiʻi have spent the last half century failing their management responsibilities for this special place. Their longstanding stewardship failures are the real emergency on Maunakea. This is why we are suing the state and the university.”

Over the last two weeks, thousands of Native Hawaiians and others have gathered at Puʻuhonua o Puʻuhuluhulu at the base of Maunakea to call for the protection of Maunakea. Kiaʻi leaders have formally asked OHA to help cover the cost for supplies to maintain the puʻuhonua. OHA has also been asked to help coordinate or provide for legal observers and other health, safety and legal needs.

“Our community is asking for OHA’s help,” said Trustee Ahuna. “Today’s resolution directs the OHA administration to review these requests and respond appropriately.”

The OHA Board also voted to “implore that the state take steps to eliminate the potential for harm to Native Hawaiians seeking to uphold their cultural and spiritual beliefs and to voice their opposition to the decades-long pattern of mismanagement of Maunakea,” by:

OHA also decided to “strongly oppose the use of unwarranted force against Native Hawaiians engaged in peaceful protest on Maunakea,” and to “call upon the Governor to rescind his Emergency Proclamation.”