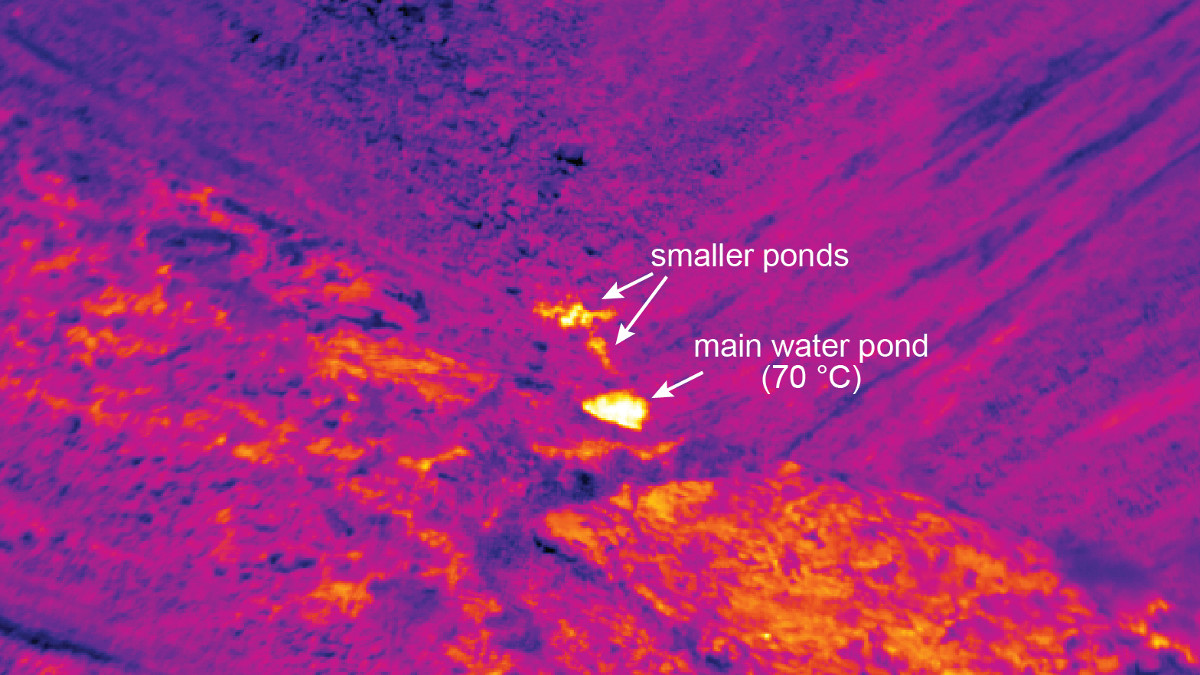 A close-up of the water ponds at the bottom of Halema‘uma‘u captured with a zoom lens on the thermal camera. The smaller bright patches above the main pond show areas of warm water in the smaller ponds. USGS image by M. Patrick, 08-04-2019.

HAWAIʻI VOLCANOES NATIONAL PARK - The new ponds at the bottom of Halemaʻmaʻu crater are growing larger and are measured to be heated to 158 degrees Fahrenheit.

(BIVN) – Scientists continue to study the formation of water ponds at the summit of Kīlaeau Volcano inside Halemaʻumaʻu crater, the first time such an advent has been observed in modern history.

On Monday, the USGS Hawaiian Volcano Observatory posted more media materials gathered the day before during field work at the summit.

The thermal images recorded by scientists indicate that the water surface is roughly 70 degrees Celsius, or 158 degrees Fahrenheit.

These images compare a normal photograph (left) with a thermal image (right) collected on Sunday, August 4. The white lines in the normal photo outline the area shown in the thermal image. Several hot fumaroles are present on the slopes within Halema‘uma‘u, with the hottest about 200 degrees Celsius (392 degrees Fahrenheit).

A USGS video was also posted, showing steam from the main pond of water at the bottom of Halema‘uma‘u. Two smaller areas of ponded water were present a short distance east of this spot.

USGS HVO has been sharing images of the water ponds on a daily basis since August. The pond has clearly enlarged since the earliest photos on July 25, scientists say.

“Until we better understand where the water is coming from, it’s impossible to understand its significance,” HVO scientist emeritus Don Swanson wrote in the weekly Volcano Watch series. “However, at this time, there is no reason to think hazards at the summit have increased or decreased because of the presence of water.”