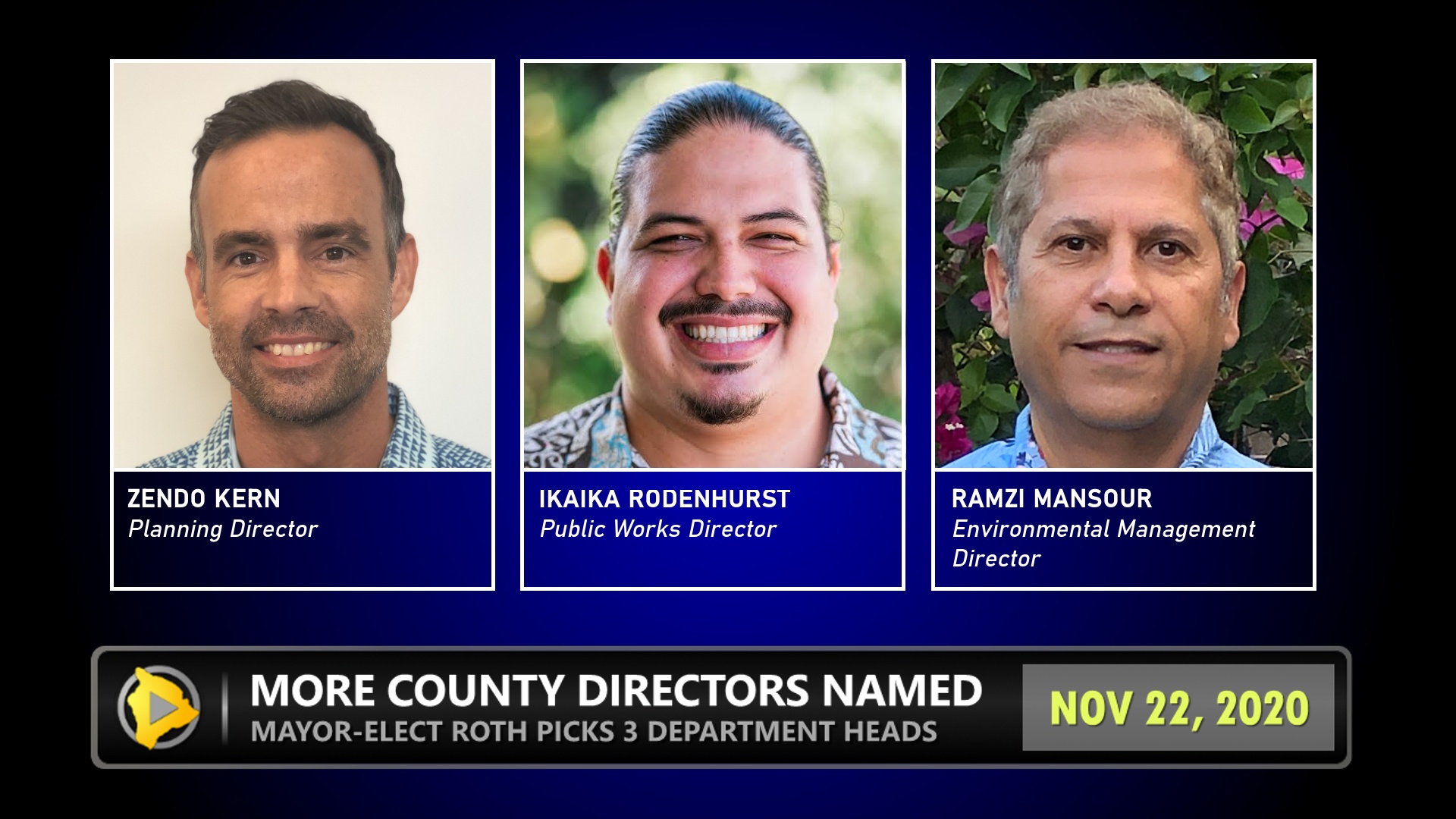 Former Hawaiʻi County Councilman Zendo Kern of Kurtistown will head the Planning Department, S. Ikaika Rodenhurst of Hawaiian Acres will direct the Department of Public Works, and Ramzi I. Mansour of Honolulu will be the new director of Environmental Management.

“I am humbled by the experience that these three people bring to our team,” said Mayor-elect Roth in a news release. “We are fortunate that they are willing to serve their community.”

In recent years, Kern has been interacting with the Planning Department in recent years as a consultant for those seeking permits. The incoming Roth administration provided this background:

Kern is best known as the County Councilman for District 5 during the 2013-2014 Council Session where he chaired the Planning Committee. Born and raised in Hawaiʻi, Kern is currently the owner of Kern and Associates, a land use consultancy specializing in zoning changes and governmental compliance. Kern has also been a businessman as well as a general contractor. When Kern was 18, he moved to the West Coast and established a successful career in real estate development.

Rodenhurst came up short in the November run-off election for the district 5 Hawaiʻi County Council seat. From the news release:

Rodenhurst, a graduate of Kamehameha Schools-Kapalama and the University of Hawaiʻi at Manoa where he majored in Civil Engineering, has worked for almost a decade with Bowers and Kubota as a project manager. He has been the project engineer for state and county infrastructure projects in both Honolulu and Hawaii Island. Rodenhurst also provided management support for repairs caused by the Kilauea Lava Event of 2018. Born in Kailua, Oahu, Rodenhurst was an all-state football player and offensive lineman for the UH Rainbow Warriors.

Mansour is currently Division Chief of Wastewater Treatment and Disposal on special assignment to the Director of Environmental Services for the City and County of Honolulu. Prior to that, he spent 20 years as Senior Engineering Manager for design, construction and closure for the Waste Management Department in Kern County, Calif., north of Los Angeles. Ramsour earned his degree in Civil Engineering from Fresno State.

The name of the director of the Department of Research and Development will be released at a later date, Roth’s team says.