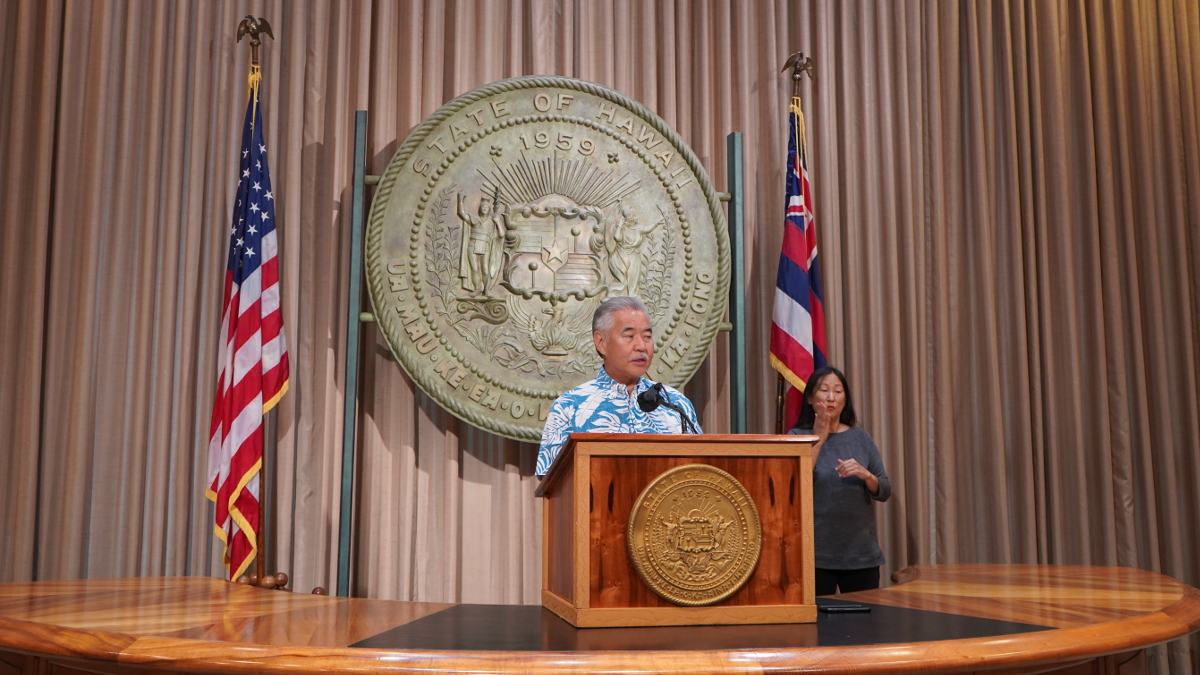 HONOLULU, Hawaiʻi - Governor David Ige is vetoing 26 bills - and line-item vetoing two bills - out of the 30 bills listed on his Intent to Veto list released on June 27.

(BIVN) – Governor David Ige on Tuesday followed through with his intent to veto all but two of the 30 bills he listed on June 27, opting to sign two bills into law.

Gov. Ige decided not to veto SB3179 – Relating to the Department of Land and Natural Resources which requires the Department of Land and Natural Resources’ Division of Forestry and Wildlife to adopt rules and issue funds to licensed hunters. DLNR will incorporate the deer control measures included in the bill, into the planning efforts of the Maui Nui deer control working group. The department continues to evaluate all strategies for the management and reduction of invasive deer species and will implement all feasible and cost-effective methods.

Also SB3272 – Relating to Transportation which requires the Department of Transportation to adopt rules to require tour aircraft operations to report details of each flight on a monthly basis, will not be vetoed. It also establishes the Air, Noise, and Safety Task Force.

“I know that noise from low-flying aircraft is a big concern for the community, and I believe the taskforce can help communicate concerns and develop solutions to address the issue,” said Gov. Ige.

Governor Ige is vetoing 26 bills, and line-item vetoing two bills, out of the 30 bills listed on his original Intent to Veto list. “Many of the bills that I am vetoing have legal, procedural and compliance issues,” said the Governor.

Veto Rationale: This program is meant to be a start-up program for new farmers to become commercially established. There are procedures in place for existing lessees to request an extension of their lease. The Department of Agriculture will continue to work with existing lessees who want a lease extension of up to the maximum 55 years.

“Current lessees can reapply for new leases and are likely to submit more competitive bids than potential lessees since they have already established their operations. The purpose of this veto is to ensure that we give as many farmers as possible the opportunity to apply for and benefit from this state program,” said Gov. Ige.

Veto Rationale: The monitoring provisions in this bill would violate the Constitutional rights of families who have adopted or taken guardianship of former foster children and receive permanency assistance for that child. The provisions would include unlimited investigations of these families if at any time there had been a complaint filed with DHS about that family, without regard to the merits of the complaint, and regardless of whether the complaint was ever substantiated. These investigations would be allowed while the child is underage, even when the Family Court found the legal relationship to be in the best interests of the child and approved the adoption or other permanent legal relationship between the child and the family. This bill would expand the state’s duties to monitor and interfere with permanent family relationships in a way that would violate the Constitutional rights of those families, without any evidence of harm or threatened harm to the child that is in the family.

“I want to repeat that I strongly support the intent of this bill, which is to give more resources and authority to the Child Welfare Services division to ensure that our keiki are safe,” said Gov. Ige. “The trauma that our community experienced over the loss of a former foster child is real and cannot be dismissed. But the solution cannot and should not violate the constitutional privacy rights and basic dignity of every family that has taken in and provided a former foster child with love and stability.”

Six other bills are becoming law without the governor’s signature. They are:

“I want to thank the Legislature for its hard work this session. Lawmakers passed bills that will help improve the quality of life for Hawaiʻi residents. Together, we will continue to protect public health, revive the state’s economy, and strengthen our communities. This session is another example that we can do great things when we work together,” said Gov. Ige.

In all, the Governor has signed 311 of the 343 bills passed by the Hawaiʻi State Legislature in this year’s session.